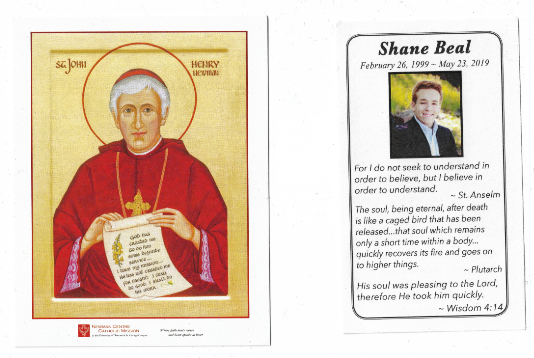 Remember two short days, shortly behind us, with a few people at the University of St. Michael’s College

The light is fading. The leaves are turning crisp, but they will soon be brown. Sitting on a park bench in the quad earlier today, the 20th of October 2019, this Twenty-Ninth Sunday in Ordinary Time, I enjoyed the shining sun, bright and warm. Today there was a Mass and yesterday, too. There are masses every day.

Yesterday, also, was a special day. The University of St. Michael’s College celebrated the life of a well-loved and much-loving student, a member of the inaugural Gilson Seminar, Shane Beal.

It is Fall. Things are falling; they are dying. There is a death, in nature, which is natural; which happens every year, regularly. There is another death, which also happens regularly: not quite un-natural, but not quite like the natural death, either.

John Henry Newman died at 89 years in 1890. He had his faults – over-sensitivity, a tendency to introversion, and “pride ruled his will,” at least at one point in his life – and, as Cardinal Thomas Collins preached today, the fact that Newman was by no means perfect should be, in some sense, a consolation to us (he is now a saint!). In the green of his youth, he may not have been growing in exactly the way he should have been – but “should” should be taken with a grain of salt, since neither I, nor John Henry, nor anyone save God, really decides “what it is we should do.” (Father Mike Schmitz has recently posted a video about “should” on YouTube.)

Shane Beal died at 20 years in May 2019. I do not quite know what to say about Shane; I did not know him very well, though I said “hi” to him once or twice at the Kelly Library Book Sale. Saturday evening, in the Shook Common Room, where the Gilson Seminar is taught, many people helped each other remember Shane. Shane had a lot of energy, but more importantly, he gave energy; as Archbishop Fulton Sheen says in another YouTube video about “Wasting Your Life,” Shane seems to have wasted his life. Wasted, but not in the bad way; he wasted it like Mary Magdalene breaking, dramatically, her bottle of perfume. She did not measure herself out in coffee spoons… As one student remarked last night, “Nowadays everyone disagrees about everything: but Shane you could disagree with over coffee, and for three hours!” A Kelly Librarian shared how Shane, despite working late and having more work tomorrow, would eagerly take another person’s shift at Kelly early the next morning out of concern for them, because… well, because of what?

The light from the park bench that was in the quad today is now gone. The air is already chilly and damp. It is almost supper time. Shane was a regular in the Canada Room, conversed regularly with his friends – “regular” in terms of regularity, not the quality of his conversation.

Eventually, after breaking down in an examination and failing in Mathematical Papers, John Henry became a mentor for students at his college, Oriel College in Oxford. There is an old YouTube video of Cardinal Collins lecturing at the Newman Centre, “Cardinal Newman As Mentor,” with our dear Cardinal speaking from joyful experience. Cardinal Collins explains that Newman often thought everyone was against him. But he bore up, at least, to the demands of his conscience. When actually accused of being two-faced, a fake, and a liar to the land, faith, university he loved, and almost to his language, Newman wrote – from Anglicanism to Catholicism.

Shane loved debate. He was famed for his breadth of knowledge and wealth of sharing, in subjects from history and theology to conspiracy theories and video games. But it does not seem to be the case that Shane Beal worried terribly about his opinions, as Newman did about his religious opinions. Shane could share, he could speak, he could go out and explore; his interior silence did not force him to fill the world with empty words, or even profound words because he was not forced to share – though he did share, very much. It is simply that his sharing was free; and this seems to be because he was loved, and he knew it. In this sense, he did not need to share.

Today, others sat upon the bench in addition to me. I think I am more like Newman than Shane; I am not alone in that. The year Shane was in the Gilson Seminar, Cardinal Robert Sarah came to St. Michael’s College; he met with our own Cardinal and lectured in the Cathedral on silence. (A YouTube video from St. Mike’s is about Cardinal Sarah’s visit, and the lecture is from his recent book, The Power of Silence.) We sat in silence upon the bench for some moments today (at least I did) wondering, “what to say, what to say?” But the sun shined; brightly, but also warmly. “I am loved by God.” This Shane knew; this Newman knew too.

At Newman’s canonization mass, Cardinal Collins considered before us, “why do some, like Thérèse de Lisieux, live to be 20, and others, like Newman, to be 90?” Life is short, he explained, and eternity is long. “Think about it.” Think about it in silence, in light, in warm light, light that speaks, speaks much, but speaks also through silence.

At Shane’s memorial mass, our Basilian Pastor, Father Morgan Rice, considered why we should persevere in prayer, why we should not give up heart, and why, sometimes, we fail to look up to the Lord’s invitation to follow His Plan. “Trust in Him.” Trust in an action, of which you are not the Author, but of which you can truly take part. A baby was baptised at that mass.

It is night. The park bench is cold. Heads are dreary and weary for mid-terms tomorrow. All-nighters are being pulled. Regrets are being recollected. The light outside is gone, but the desk-light is on, the interior of distant condominiums vaguely visible.

Some are writing grammars for their assents, some apologies (though unapologetic) for their lives, and some poems that ask, finally, to be led to the next step. Newman’s grammar is now a real language, the Apologia a corner-stone, the poem a hymn, and all is well in the end because the light will shine tomorrow, and there will be a next step; there may be yet many considered steps.

But Shane did not wait on the steps, as Principal Randy Boyagoda explained last night. As the teacher of the Gilson Seminar in Rome, Dr. Boyagoda recognized the dazed faces of his students, among whom I would count myself the next year, leaving a tour from the bones of Saint Peter to the Dome of the Basilica, each person knocked over, trying to interpret the colossal letters for which these things stand. But Saint Peter’s Basilica has a resident Author and because Shane knew Him, Shane knew where to go from the steps of Saint Peter’s bones: onward to the bones of Saint Catherine of Siena, of course! “Life is short; eternity is long.” “Follow His Plan.”

It is bedtime. One sometimes wonders these days what is better: dream-life or waking-life, fiction or non-fiction, Halloween or Hallows’ Eve. Or so these states have been construed, and so we settle for the in-between.

But that you are the author of your dreams does not mean that your waking-life has no Author. There are masses every day, except for one; but they all do flow from that one. Ordinary Time from Good Friday. Burning from Words. Warmth from Light. Jesus Christ.

His soul was pleasing to the Lord, therefore He took him quickly – Ex umbris et imaginibus in veritatem.

It has been requested thoughtfully by the Editor-in-Chief to clarify the final lines of this piece for anyone who is not intimately familiar with the subject matter. I spot three such opportunities: (1) the Author mentioned in St. Peter’s Basilica is indeed the God Who resides in the Tabernacle of any Catholic Church; by Shane’s knowledge of Him, I meant only knowledge of His Love, which is no different from Himself, though often forgotten or ignored (by myself among others). (2) The distinction between waking-life and sleeping-life (or dream-life) may seem like an odd distinction to make for anyone who believes him or herself to be living sanely in the real world: “of course I am in real life” we would quickly say, and I would quickly concede. But the point is that we do tend to prefer illusions to real things, especially when life becomes “tougher” or “harder” or “more complicated;” it is also true that assent to God’s role as the Author and Creator of our lives requires some sort of comprehension of the very Person Who sustains us at every moment. As the theologian Frank. J. Sheed noted, not to recognize God holding us in existence is like not noticing that a coat is being held up (beyond our vision) by a hook: it is not so much that we see things all wrong, as that some things, we do not see at all; and when we try to see things that we cannot see, like some of God’s actions, we inevitably come up with illusory things, which we “see” but do not exist: these are dreams. (3) Ordinary Time, as mentioned in the beginning of this article, refers to the liturgical calendar of the Church: this includes Easter, Christmas, Lent, Advent, many feasts, and the other regular ecclesiastical times: this regular time is Ordinary Time. Again, what it means to be in “regular” or “ordinary” time will depend on what you think is true about “time” at all: and the Church places the Life and Death of Christ at the very core of time, the very purpose and action of God’s which was the basis for time in the first place. And so that is what I mean, saying that Ordinary Time flows from Good Friday, since Good Friday is the day held by the Church for the Death of Christ upon the Cross. This day, as is also mentioned, has no celebration of the Mass; I am no expert, but the reason for this seems to be that Good Friday (Calvary) is the actuality of the sacrifice which the Mass truly represents and enacts.