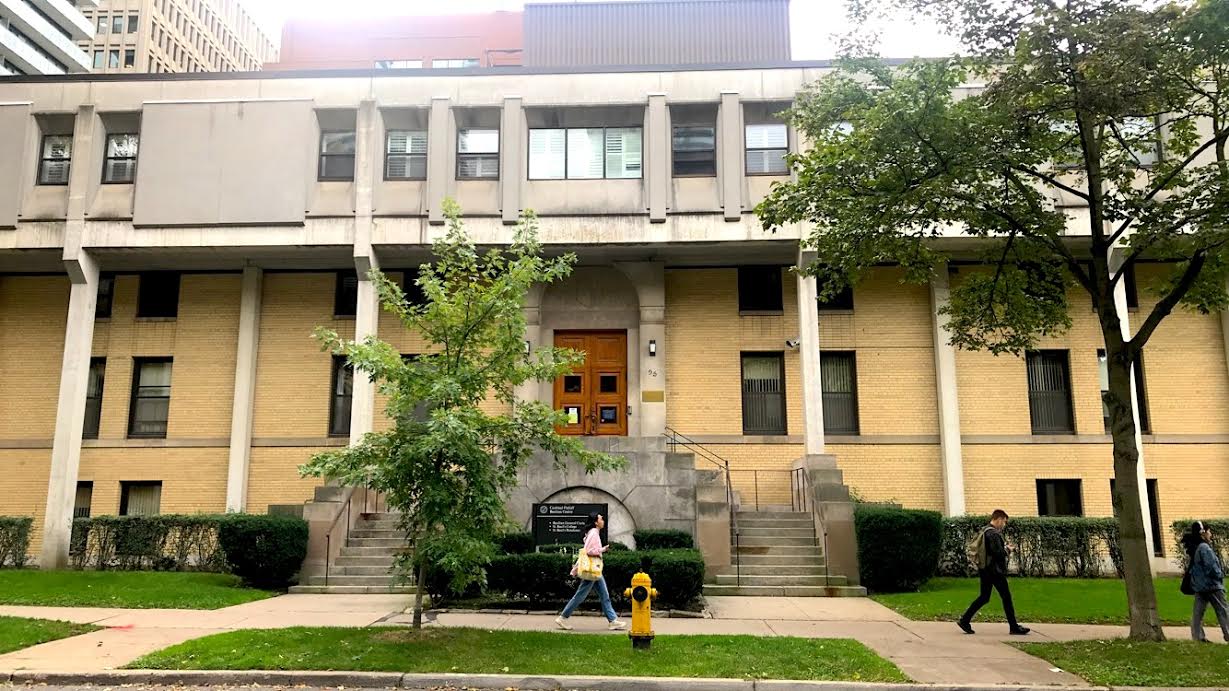 95 St. Joseph, including the Newman Hall chapel, to be repurposed as residential space

The University of St. Michael’s College (USMC) building at 95 St. Joseph St. is set to be redevelopedinto high-rise condos, as proposed by the Basilian Fathers of Toronto in conjunction with The Daniels Corporation. This includes the Basilians’ own Cardinal Flahiff Basilian Centre as well as Newman Hall, a neo-Gothic chapel built in 1914 . The site owes much of its design to renowned Canadian architect Ernest Cormier. Cormier’s Toronto designs — which include Newman Hall, Carr Hall, and St. Michael’s College School — have been nominated for Heritage Preservation Services. The application was submitted in July 2017 and the outcome could determine whether the historic chapel will be protected as a cultural landmark, or repurposed into high-rise condos.

The 95ActionGroup immediately formed a committee to speak out against the proposed redevelopment of 95 St. Joseph St. The proposal was submitted on February 6, 2019, and included a total gross floor area of 49,216 square metres, 79% of which will be residential and only 3.5% of which will be allotted to the Basilian order. This will be composed of two adjacent structures, a 39-story tower and a 15-story podium, comprising 502 condo units. For a building of this scale, regulation would call for 316 resident parking spaces; only 86 have been cited in the proposal. Chris Robinson, a member of the 95 St. Joseph action group, told The Mike, “The whole scale of the [redevelopment] would be totally inappropriate for the site.”

“It’s the wrong building, at the wrong place… [there are] so many reasons for that, [and] it is astonishing that the developer would ever have tried to slip this past the city,” Robinson laments. “But they have put in the formal application for rezoning and re-planning so we have to regard it as being serious. They’ve invested a lot of money already in putting forward the proposal.”

Speak out against this proposal by signing an online petition.

Ed Gabis, a USMC alumnus from the class of 1960, attended the University of Toronto (U of T) at a time when the Basilian seminaries were an active part of the school community. Gabis met with The Mike to discuss the pending events, which he called a “disturbing thing.”

“A number of my classmates and I share grave concerns about this development and are deeply distressed over the pending destruction of the distinct character of St. Joseph’s Street and St. Mike’s,” Gabis said in an impassioned letter to Greg Sorbara, lamenting “the loss of a unique Ernest Cormier-designed building” and the “negative impacts for the not-yet-completed Bay-Cloverhill Park just to the east of the Sorbara residences.”

A community consultation meeting took place on June 20, 2019. Dara Beard, a resident of 62 Wellesley St., another building which will be affected by the proposal, outlined the concerns voiced during the meeting. She wrote: “As I walked… through the University Campus, I am reminded again what a unique and very precious jewel this area is. And how important it is to protect the heritage, scale, and beauty from the intensive development that has rightly been channeled into high density routes that are removed from this calm oasis in our city.”

Beard’s summary lists the major concerns regarding the proposal, including heritage and traffic. Other concerns involve the St. Mike’s community and potential environmental ramifications.

The effect on St. Mike’s students

Robinson spoke further with The Mike on the specific effects this proposal would have on the USMC community: “The norm for U of T’s Toronto campus is for 30–35% of lot coverage [ratio of building to surrounding land], with abundant green space. This proposal is for over 52% coverage of the lot with an obliteration… of those lovely green tree-covered courtyards in the centre.”

The area is protected both in the city plan and the U of T secondary plan. “That specific site is seen as institutional only and from 4–6 stories maximum. They are looking, obviously, to making it a mixed-use site and going up to 39 stories, so that’s the crux of the clash here,” Robinson explained.

He continued, “In terms of the St. Mike’s campus that is so important to the students, this would be a hideous building overlooking the campus from a huge height and casting a huge shadow across the lovely grass lawns that the students quite rightly love to meet up on, and have picnics on and all of that… It would see a shadow effect for much of the day and for much of the year.”

Robinson also outlined for The Mike the environmental ramifications of the project, focusing on hydro-geological issues and citing the developers’ own 86-page hydrological review as evidence.

“Because it’s such a big building… they would have to dig down to 7.2 metres below ground level and the water table from their bore holes is from 4–6.5 metres below ground level, so clearly they’re going well below the water table.” He attributes this to a subterranean tributary of Taddle Creek, a body of water which flows through the university campus and is the reason that Kelly Library, 95 St. Joseph’s neighbour, had to be built without a basement.

“The building on the other side [of 95 St. Joseph], 100 Bay… had big water problems [during construction]… it was a lake more often than not,” Robinson recalled, affirming that developing a high rise on top of a tributary is environmentally unsustainable.

If the proposal were carried out, 149,000 litres of groundwater would need to be pumped from the building per day on an ongoing basis. The water would be funnelled into the storm water sewer system.

“The whole system is already overburdened,” Robinson said. “[This] would simply add to the flood risk.”

Robinson also pointed out that the figure of 149,000 litres “will be actually on the low side,” given that the data was taken during a period of little rainfall. “Obviously because they’re being paid by the developers… they wanted to have the most favourable results,” he said.

The developers also measured the total dissolved solids in the groundwater beneath 95 St. Joseph. The value measured was 34 times the maximum amount permitted by the city, which means that the water would need to be heavily treated before it can be pumped into the storm water sewer system.