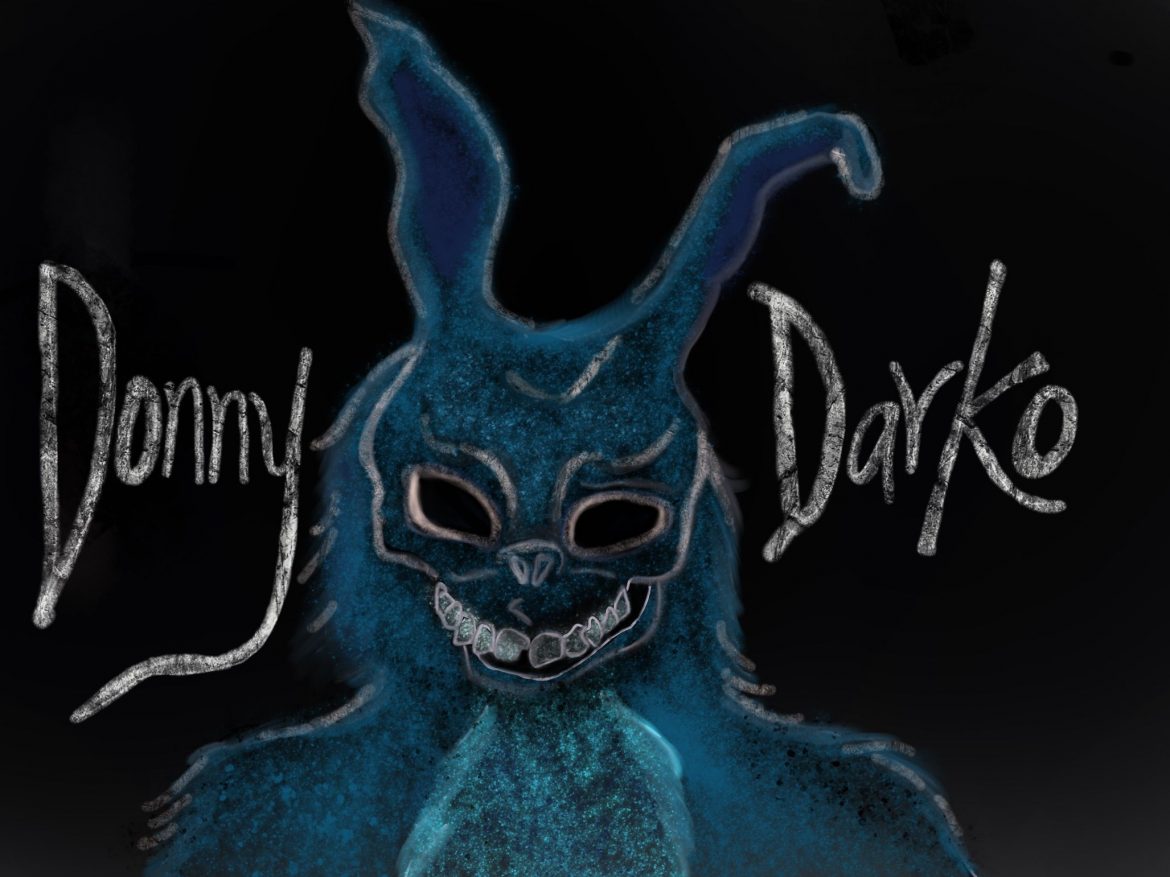 Donnie Darko was released in January 2001 at Sundance Film Festival; I was born later that year. It is impressive how a film I would watch many years later continues to resonate with me and its cult fanbase. Donnie Darko’s cult following did not develop right away — if anything, the film was mostly consumed on home video after it only grossed $517,375 at the domestic box office. Certain scenes and moments in the film held it back from performing well at the theatres, specifically that it was released only six weeks after the tragedy of September 11th and its trailer featured a plane’s engine crashing into the main character’s room. Donnie Darko is a film loosely about time travel — in fact, almost nobody who was a part of the cast understands what the film is about to this day. Jake Gyllenhaal stars as the titular character and is warned by a giant bunny rabbit named Frank that he has around twenty-eight days to save the world. I believe that this is a film that is enjoyed primarily on one’s own interpretation, nostalgia, personal experiences, and sympathies toward Donnie as a character. So, in my argument for the canonization of Donnie Darko within the cult film landscape, I will focus on the social and aesthetic contexts regarding how the film affected my life and the lives of the cult fanbase. In considering how my social experiences impact my enjoyment of the film, it might help in establishing a framework of how certain elements might resonate with other people as well. As for the aesthetic, Donnie Darko is a riff of many pre-conceived notions of the sci-fi and time-travel genres as well as a transgression of the concept of ‘superhero’. That is not to say there are not interesting things to say about the reception of this film, because Donnie Darko released alongside a website that explains a lot regarding the incoherent plot, as well as plenty of Reddit threads discussing it as well. I just was not part of that moment in the cult’s lifecycle, so it does not help me argue for my relationship with the film.

A good place to begin would be a brief description of what a cult film is before I make the case that Donnie Darko should be a part of its canon. Cult cinema is a phenomenon related to a particular group’s love for a film in which it lives on for a long time in the hearts of its fans. This love can be either continual screenings at a local theatre years after its initial release or a boom in its home video sales that allows for continual viewings on-demand. These close feelings for a film typically come from a film’s appeal toward a deviant subculture or a film that performs poorly in theatres and has to rely on distribution and consumption methods outside the mainstream. As cult films are categorized as being outside this mainstream viewing practice, fans may be drawn toward feelings of exoticism, rarity, or transgression in a film. Fans may also find pride in memorizing quotes or cues within a cult film as a symbol of devotion for such an ‘exotic’ text. Donnie Darko shares these characteristics in its poor opening reception in theatres, its anti-conformist attitude and its continual rewatch ability amongst fans.

The main character, Donnie Darko, lives in a suburban neighborhood, enjoys cracking jokes with his friends, and aggressively fights against conformity. As an angsty teenager from the suburbs, I saw a lot of myself in Donnie Darko. It was empowering to see a character on screen that was unapologetically himself and was proud of being ‘different’. It is through atypical means, mainly the supernatural, which elevate Donnie Darko from regular teenager to superhero. The film is a subversion of what a superhero is previously thought to have been. Donnie is not supernatural himself, and he is not freakishly tall or strong, but placing Donnie in this atypical situation provides him an opportunity to save the world and be someone who should be revered. The film has a self-awareness of this ‘superhero aura’ around Donnie and it all begins with his name, as his girlfriend Gretchen asks, “Donnie Darko…the hell kind of name is that it sounds like a superhero or something?” and Donnie responds, “What makes you think I’m not?” Superheroes are also not usually seen questioning authority figures, especially teenagers, as adults stereotypically look down on teenagers as being ignorant. Superheroes are typically those who seek the stability of law and authority — and they stop those who threaten to disrupt this stability. A superhero seeks justice. For Donnie Darko, those who defend the stability of authority are the ones performing the injustice. This subversion is what teenagers find so appealing about the character as they might share those same sympathies. One also cannot say that Donnie is an ‘anti-hero’. Although he is causing mischief for the means of his end, at the end of the day, he is doing so to save the world. When Donnie performs malicious acts in the eyes of the adults (like flooding the school), he may be disrupting authority but at the same time is performing the ultimate deed (saving the day) that can undermine any false pretenses. In many scenes, Donnie is seen questioning his teachers and self-help speakers, and insists that life is much more complicated than the surface-level advice they are offering. Famously, Donnie Darko calls Patrick Swayze’s character “the antichrist” as the 80s star plays a self-help speaker. It is also ironic that Swayze receives this criticism, as he was considered to be America’s sweetheart around the time of Dirty Dancing and certainly no antichrist. Fans love this scene for its irony, subversion of stardom, and its provocative nature toward someone as notable as Swayze. Donnie Darko thus embodies the social strain between teenager and adult: a battle to be understood. Donnie acts as the spokesperson for youth and an empathetic figure.

Donnie Darko caters to the idea of ‘archetypical appeal’ as even though the film is set in the 80s, the genre and societal themes pertaining to the youth can inspire many generations. A coming-of-age story of a teenage boy struggling to find himself, is also ‘the cool kid’ and gets the girl, is something that teenagers from any point in time can return to and enjoy. The narrative transcends the point in time the film is set as the film’s popularity continues to grow. The important question to ask then is why this film is a cult classic and not a mainstream coming-of-age picture? The answer may very likely be in its plot and strong sci-fi influences. The film gives almost no answers as to what actually happens as there are conversations about parallel universes, time-travel, philosophy and destiny that are sparse and almost incomprehensible. This is so much of a problem that director Richard Kelly created a website with detailed explanations of key concepts hinted at in the film. In 2004, he made a director’s cut that included scenes that were cut due to studio demand, as well as large blocks of text in the middle of the film that explain the film’s rules of time-travel — just as the website had done. Cult audiences still prefer the original cut, because although the director’s cut offered coherence, the cult audience prefer to be subject to the ‘glorious incoherence’ that was the original cut. Incoherence allowed for the long Reddit threads and discourse to flourish that both rewarded the viewer for paying close attention to the film and for having a deep knowledge of the sci-fi genre and its tendencies.

In many ways, Donnie Darko is a celebration of genre in its amalgamation of ideas and references that influenced the director as a kid from sci-fi films of the past. In that same way, Donnie Darko even transcends the rules of genre for creating its own new combination of ideas such as tropes in coming-of-age, sci-fi, time travel, and superhero films. Who knows? Perhaps a fresh new director down the line might make their own odd combination-of-genre-tropes film that was inspired from when they saw Donnie Darko as a child.