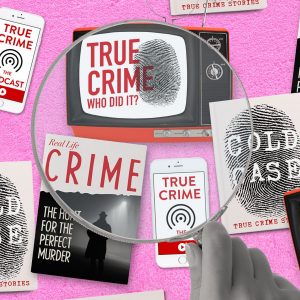 Our fascination with true crime, and how it may be more harmful than we think

The sensation behind true crime is nothing new, but within the past decade it has become far more accessible and varied due to the internet. I can admit that I am one of many people who indulge in true crime documentaries every now and then when Gilmore Girls simply doesn’t cut it. But why are we so attracted to the true crime genre? In an era where bad news seems to infiltrate all media outlets, why do we choose to view gruesome recounts of horrific crimes?

No, it isn’t necessarily because we are horrible people, who deep down have urges to commit similar wrongdoings. We watch true crime media for the same reason we watch horror movies: a classic adrenaline rush. Throughout the pandemic, the desire to watch true crime media makes all the more sense. As we quarantine, we have limited sources of adrenaline. Many of us are stuck in dull routines that include very little interaction outside of our homes. True crime media can provide us with a healthy dose of escapism and thrill.

But, part of being a conscious consumer is understanding the consequences of the content we watch. Unlike some horror films, the blood and guts featured in true crime are often rooted in reality, though the genre is also no stranger to dramatization. The survivors of infamous crimes are often not consulted before being portrayed on the big screen. Extremely Wicked, Shockingly Evil and Vile was released on Netflix in 2019 and tells the tale of Ted Bundy’s crimes. Kathy Kleiner, who survived an attack by Ted Bundy, told BBC that she did not consent for her story to be a plot point in this film. Survivors should not have to endure depictions of their trauma being televised for the public to view.

There are also valid concerns surrounding the true crime genre as it can potentially glorify and inspire the reenactment of the actions in question. Copy-cat crimes are rooted in generalized imitation, which is exacerbated when detailed accounts of the perpetrators’ backgrounds are given. To combat this, numerous media sources have stopped naming the perpetrators of mass shootings. Unfortunately, the efforts of media sources may be rendered useless, as the true crime genre often focuses on the backstories of perpetrators in an attempt to understand the thought processes behind their actions.

True crime is a massive genre with a dedicated fanbase, and not without reason. As humans we are curious creatures, and the taboo nature of true crime stories are what make them so compelling to most of us. However, we must consider the repercussions of consuming this type of media, and must do so consciously. There is no excuse to exploit a victim’s trauma for the sake of entertainment, and it is imperative we re-evaluate the true crime genre to respect this.