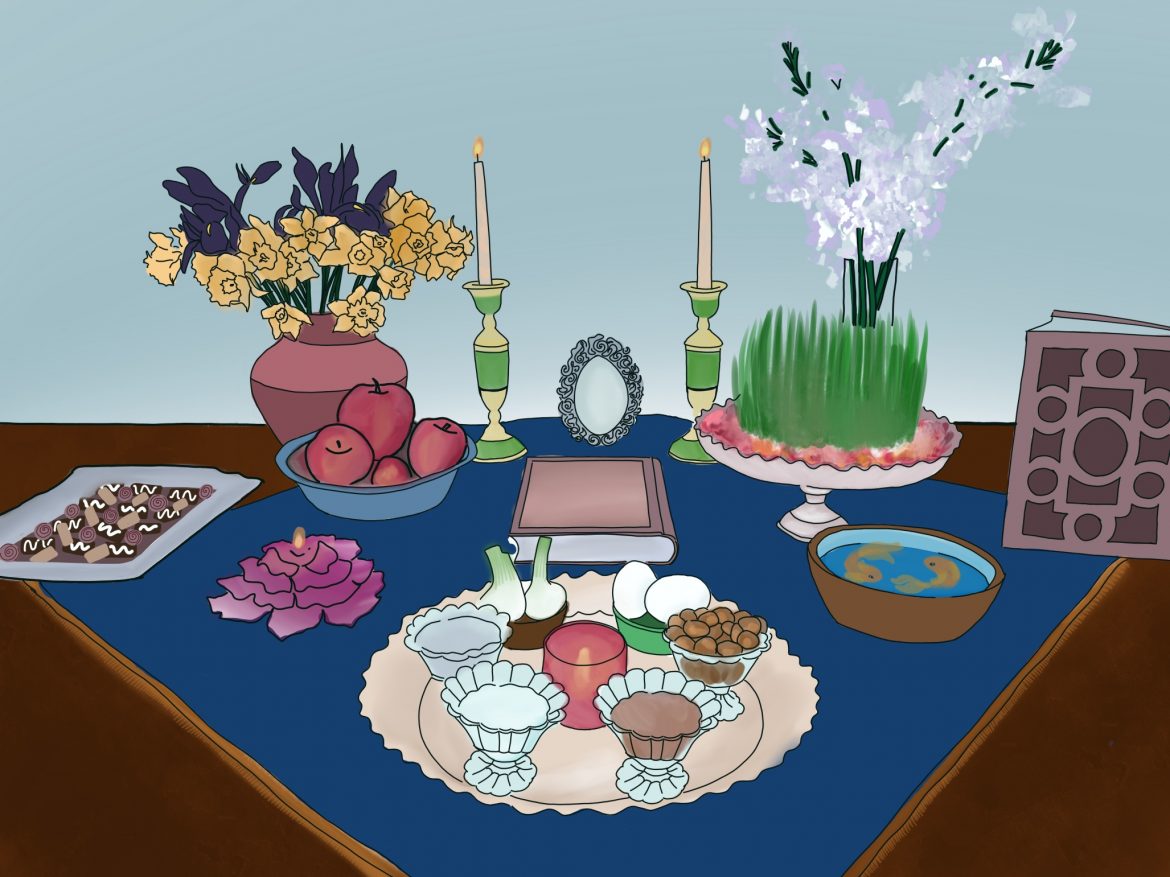 A guide to celebrating the Persian New Year

Spring evokes many positive sentiments among people–we start to appreciate the warmer weather, the longer days, and begin to regain a sense of hope for the upcoming months as winter starts to disappear.

For Iranians such as myself, spring is also the time of the Persian New Year, also known as Norouz, which in literal terms means “New Day”. This holiday falls on the day of the spring equinox, which holds a doubly essence of transition and transformation. It’s one of the most exciting times of the year for me, and as someone who is proud of my heritage, I would like to explain the elements that make up the festivities and celebrations Iranians partake in.

There are multiple events leading up to the day of celebration. To kick things off, Iranians must begin their shopping! The setup for the new year includes creating a haft-seen table, which is a spread that has seven items starting with the 15th letter of the Persian alphabet (س), or the letter that makes the ‘s’ sound (“haft” means seven and “seen” is the name of the letter that’s equivalent to the English ‘s’ in Farsi). Some people choose to add extra items, and they all have their own meanings. They collectively represent growth and renewal, perfect for the season.

The seven main items include:

Sabzeh (a dish of seeds that you grow beforehand, usually lentils or wheat): Symbolizes rebirth.

There are additional items that start with the same letter, but are not part of the main seven:

Mahi (fish): Symbolizes life. Goldfish is the go-to fish due the colour that represents livelihood and affluence.

Tokhmemorgh (egg): Symbolizes fertility. Eggs are decorated or painted, and are most commonly done so using natural materials. One way is to boil the egg with purple onions and let the onion dye the eggs.

A book of personal choice, usually poetry or prayer is included as a sign of wisdom (my family uses a book of Hafez’s poems).

In Canada, Iranians go to makeshift bazaars around the city where ordinary places have been turned into markets full of shops selling their wares, and some places also include entertainment. This year, after two years of not going thanks to the virus, I visited Star Nation on Yonge Street, where Milad J, a Torontonian-Iranian singer performed, and tables were set up to sell various products and foods. The air was lively, and there was a sense of unity as everyone’s collective goal was to celebrate the first day of spring.

Once you have bought these in advance, the next stage of celebration is participating in a festivity called Chaharshanbeh Soori. Celebrated on the last Tuesday night of the year according to the Persian calendar, you light small fires (or big, if you’re feeling gutsy) on the ground and take turns jumping over it. When jumping, you say to the fire “take the yellow of my sickness, and bring the read of my health,” and you hope the new year will bring health and rid chance of sickness by doing this ritual. It’s very fun, even if all you’ve got is a small candle.

By the time the spring equinox occurs, you should have your haft-seen set up. Each year, Norouz is celebrated at a different time. You gather around the table with your family, say your prayers for whatever you wish the new year will bring, and when the time comes, you exchange love between yourselves and, of course, gifts! Usually, the tradition is that you gift those younger than you (so if you’re the youngest, you are especially lucky!). For the next couple of weeks, families continue celebrating by visiting each other’s homes just like any other holiday, and to end it off we celebrate Sizdah Bedar. This is a day when no matter the weather, you must be outside and spend as much time as you can in nature. It’s annually held on the thirteenth day of the first month according to the Persian calendar. Families commonly gather to picnic and sit by fires if it’s cold out. The sabzeh is brought to these picnics and the ends are tied in knots. The knots represent your wishes for the next year, and depending on how big yours has grown, you can tie as many knots as you’d like. You then find a body of water and toss the sabzeh into it, hoping your wishes will be granted.

When I was younger, Norouz was not commonly celebrated or acknowledged by my peers and community, so my goal is that this guide may have taught you something new and you might be interested in participating next year! I hope this spring will give you happiness, prosperity and many beautiful days ahead. Happy Norouz!