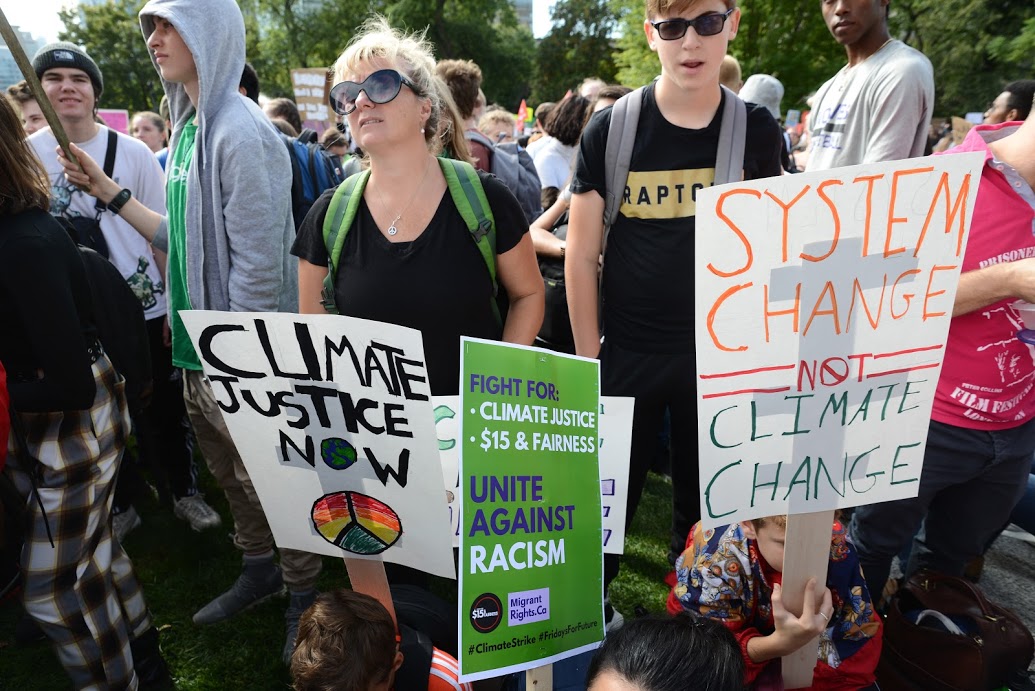 Schools across the GTA strike for climate change, but more needs to be done

On September 27, students at the University of Toronto (U of T) and nationwide participated in the Global Week for Future climate strike. This strike was part of young Swedish climate activist Greta Thunberg’s “Fridays for Future” initiative. The week-long strike began on September 20 and saw participation in more than 150 countries where youth activists initiated school walk-outs and other events as part of the global strike.

At U of T, students gathered on Queen’s Park to stand in solidarity with the millions of other protesters across the globe to let their voices be heard as part of the strike. The rally began at 11 a.m. and followed with protesters marching throughout Toronto’s downtown core at noon. At 2 p.m. protesters returned to Queen’s Park to conclude the rally with speakers and musical performances. The strike also featured speakers such as Lindsay Beze Gray and Vanessa Gray from Aamjiwnaang First Nation, and Indigenous activist Cody Looking Horse among numerous others.

Earlier in the week, students at U of T petitioned for all three campuses to close down activities as a way to facilitate participation in this strike. An open letter was also sent to U of T President Meric Gertler prior to the September 27 strike. The student petition stated, “This is a critical moment in the campaign to push for more immediate and meaningful action.” Other post-secondary schools such as the Ontario College of Art and Design (OCAD) hosted a walk-out Friday morning, cancelling all classes and activities.

While U of T did not facilitate class cancellations campus-wide as students had petitioned for, the Faculty of Arts and Science Dean Melanie Woodin did email students to address her support for participation. She stated that she asked “instructors to provide flexibility for students who do not attend class” on the day of the strike. It can be speculated that, while winter blizzards prove a good enough reason to cancel campus activities, a climate strike seemingly did not harness the same effect for U of T.

So, what more can U of T do to help in this pressing issue? Well, as of recently, U of T has released a new low-carbon plan to get on the path to becoming a “net-zero” institution. It plans to do this by dropping its usage of greenhouse gas emissions. This is just a small step, but it’s seemingly a step in the right direction. While U of T is making strides in sustainability initiatives as outlined in the 2019 Annual Report of the President’s Advisory Committee on the Environment, Climate Change, and Sustainability, more needs to be done.

“We have a crucial role to play in meeting the growing climate challenge. […] U of T has an opportunity to lead by example, through exemplary research, education, student initiative, and concrete policies and actions,” Provost and Vice-President Cheryl Regehr stated in an article by U of T News.

Striking is only the first step toward initiating real change. U of T and other institutions need to do their part in producing more sustainable community infrastructures. Though, this does not solely lay upon the shoulders of educational institutions. It is also the government that must play a crucial role to facilitate meaningful action.