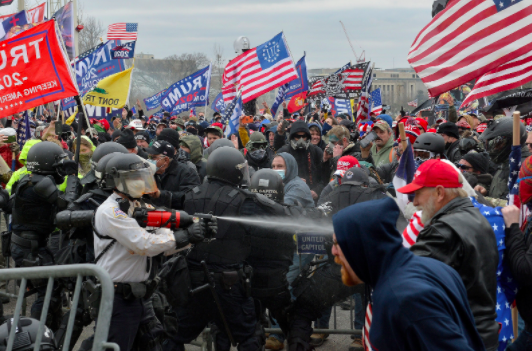 How threats to the U.S. Capitol presented the potential bias of its law enforcement

On January 6, 2021, people around the world were glued to their television, watching U.S. citizens attack the U.S. Capitol. Since the 2020 election started, Trump declared that he would win, but when he didn’t, he said that the election was rigged. After he lost, he desperately searched for a loophole. He fed his supporters lies and encouraged them to use violence to overturn the election results. Trump wanted his supporters to rage war against the U.S. federal government.

I was surprised to observe the lack of reinforcement from police officers, but at the same time, I was not surprised. There were many plans regarding the attack coming from Trump and his followers that were circling on the internet. The government had enough time to prepare for the attack, however, there wasn’t an adequate number of police protecting the U.S. Capitol during the riot. The riot was a prevalent display of the double standards toward privileged and unprivileged people. Since the majority of people in the U.S. Capitol riot were white, the police were more lenient in enforcement. The Trump supporters knew their privilege, which enabled them to push the limits. If the protestors were people of colour, we would have seen a distinct contrast in the police force’s reaction. Trump supporters were not met with bullets, tear gas, or physical resistance from police officers.

At the beginning of the riot, police officers were seen walking around relaxed, but as things escalated, they quickly became outnumbered. Everyone was waiting for the U.S. Capitol to call for backup, but by the time backup came, the damage was already done. The rioters broke windows, trespassed, climbed walls, and entered the U.S. Capitol. They invaded the senators’ offices and stormed the halls of Congress. Clips were circling of one police officer running, trying to prevent rioters from attacking him, while fending them off with a stick. Other police officers were found taking pictures with the rioters, silently agreeing with their actions. Even Trump and some members of his party were celebrating the achievements of his supporters. During the riot, Trump and his party members were watching the riot on television while listening to music and laughing. This emphasized that the riot was encouraged and celebrated by Trump.

During the Black Lives Matter (BLM) protests, people of different ages, ethnicities, genders, and races gathered to peacefully protest for Black people’s lives. But what were they met with? Military forces, numerous police officers, and brutality. Peaceful protesters were tear-gassed and forcefully removed from the premises to clear the area in Lafayette Square. The location was cleared because Trump wanted to take a photo-op with a Bible in front of St. John’s Church, despite the outcry of racism and police brutality. These protesters were treated drastically different due to their cause, fighting for Black lives. While Trump’s supporters were violently invading the U.S. Capital with the intention of attacking former vice-president Mike Pence and other federal workers, they were not met with bullets or tear gas, nor were they physically assaulted to the extent to which BLM protesters were.

The whole world watched as these horrendous, violent Trump supporters attacked U.S. democracy. The U.S. Federal law enforcement expressed their surprise at the lack of strong police presence and breach of the nation’s Capital. This event expressed the large racial divide in the United States because people of different races are treated differently. Institutionalized racism is embedded into every sector of the country and leads to inequality, discrimination, power imbalances, and police brutality. The riot at the U.S. Capital shed light on how fragile democracy is and showed the contrast between how privileged and unprivileged individuals are treated.