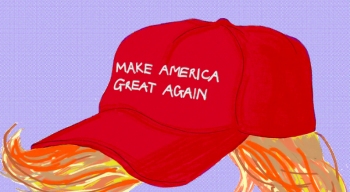 Despite Trump’s loss, populism and nationalism are still prominent in the United States and the world

On July 14 2015, Donald Trump trademarked the slogan “Make America Great Again,” following his announcement of his run for president. This slogan quickly became the essence of Trump’s electoral journey, as well as his time in the office, bringing about an era of nationalism and populism. This slogan inspires images of hope and prosperity, painting a world of American dominance. Over the course of Trump’s term, nationalism was paired with populism. Populism is an approach to politics centered on prioritizing the people over the elite, whoever the “people” or the “elite” may be. Trump’s political strategy rested on a mix of nationalism and populism, focusing on American success while also challenging fundamental American institutions; representing the “voice” of the forgotten and limiting the influence of liberalism. While Trump’s term has come to an end, ideas of populism and nationalism have been established within the mind of many Americans, raising the question: are the ideologies here to stay?

Before considering the resilience of nationalism and populism, it is important to discuss the implications of both ideas. Nationalism is a rather simple idea of essentially placing national interest and sovereignty above all else. Nationalism is hardly a new idea and has often directed the political interests of many countries. This concept invokes the desire to dominate over other countries and inspires national pride within the population. Over the course of political history, liberalism has widely overtaken nationalism as the main concept of political development, prioritizing interdependence rather than prioritizing national interest. However, Trump has replaced American interest above all else, setting a new precedent for American politics.

Populism, on the other hand, is more complex. As stated above, populists develop political action on the idea of working for “the people” against “the elite.” Populism can be simplified as “anti-establishment,” focused on fighting the status quo for the sake of the people. Populism is not an ideology in itself and does not have particular placement on the political spectrum, though the main forms of recent populism have been associated with the far-right politics. Populism is also illiberal in nature and attempts to disassociate liberalism with democracy, striving for illiberal democratic political organization. It has developed from the growth of distrust in mainstream politics and the institutions that control our daily lives. Populism under Trump has been characterised by extreme right-wing ideals, promoting traditional values and limited immigration, presenting a very particular idea and perspective on American society as superior to others.

The problem with populism is that the ideas it promotes are quite vague. The general idea is that populists fight for the people and protect them from the elite. However, if this is true, pertinent questions quickly follow: who exactly are these people that populists are working for and protecting from the elites? And on that note, who are the elites that are oppressing the common people?

The answers to these questions are hardly uniform. For populists, “the people” is a fluid term and is open to interpretation. For example, Glaston William in The Populist Challenge to Liberal Democracy states that leftist populists tend to define the people based on social class and the elite as the rich and wealthy. However, right-wing populists tend to prioritize ethnicity and think in cultural terms while the elite are supposedly liberal institutions. In populism, there is a distinction between those who agree with the populists’ philosophy of politics (the “true people”) and those who disagree. This infers that those who are supporters of the populist agenda are the legitimate people, whereas the opposition are illegitimate. Professor Cas Mudde of the University of Georgia highlights that populists are not necessarily concerned with ideas of wealth and money. The legitimate people are those who have the “correct” set of values and that are morally superior to the rest. This appeals to those who feel that they have a monopoly on the state of the country. Furthermore, populism often focuses on the “silent majority” — the uncelebrated, disrespected part of the population that has been ignored and overlooked. Both these ideas are essentially imagined and brought to life by the populists’ ideas of the “pure people” and the “silent majority” as an attempt to distort reality in order to fit the morals and values of a particular politician. These can be seen as a method of establishing power, taking advantage of observed polarities within a society. When going through the list of what constitutes a populist, one cannot help but picture Trump and his red “Make America Great Again” hat he so proudly wears.

Populism has garnered support due to a growing distrust in political institutions and, following this idea, Trump formulated political rhetoric that worked against the status quo of politics. Furthermore, populists are concerned with the silent majority — the invisible group of people that must certainly support the populist politician’s agenda and yet are not heard due to the oppressive nature of the elite. Trump’s recent claims of election fraud following the 2020 election is a perfect example of such a claim; for Trump, a populist, the failure means there must be some form of external factor hiding the reality, such as institutional restraints on the ability of Trump to maintain power. What Trump managed to do particularly well was to take advantage of the anger that many Americans felt towards the institution of American politics; anger that has not disappeared just because Trump is no longer in power. Trump presented himself as a new kind of political candidate: one that has the interests of the common people at heart and professes a desire to defeat the system. Whether by strategy or by accident, Trump is the perfect populist.

The resilience of populism and nationalism

This writer argues that nationalism and populism are unlikely to be going anywhere anytime soon. They are based on ideas that appeal to the desire to dominate and to have one’s fundamental morals validated on the political stage. Nationalism has forever been part of the political order and, though its level of influence has varied, it has always played a role in the way we understand international relations. To a certain extent, the principle of nationalism has always influenced political decisions. Though America has gone through a period of reduced nationalism, political leaders essentially tend to prioritize national interest, whether discreetly or publicly. Trump’s unashamed expression of nationalism has reawakened a fundamental spirit of American superiority, accompanied by many traditional values, such as isolationism. While Trump has perhaps revitalized nationalism, he hardly remade it. Nationalism is resilient to the test of time, and Trump has just reinvigorated it. For nationalism to fail, the importance of borders and national pride would have to be replaced by ideals of open borders, complete interdependence of states, and cultural acceptance and tolerance. In observing the state of American politics, it seems unlikely that we have reached anywhere near such a social state.

Populism is also likely to remain relevant in the political order. Populism is simply another response to a political system that has never been able to please everyone. Prominent political ideologies have always been subject to change. While some are more persistent than others, all of them are eventually challenged by another form of political organization or theory. Stagnation is not common and, perhaps, impossible when it comes to the political order of the world. Populism is based on the desire to go against defined institutions and to prioritize the people. This is a perfect model for the expression of general political discontent. If a group feels strongly enough that they have the ideal model for political life, they may feel that they have a duty to challenge institutions that do not conform to their beliefs. It also supports the idea that if the mainstream institutions do not promote what you believe, then there must be some kind of external force, some form of conspiracy preventing your opinion from translating into state policy. This provides a feeling of invincibility that rises above democracy and the importance of structured institutions. This is dangerous in the hands of someone whose ideas do not necessarily represent the common good of the people. Populism provides a vague but comprehensive template for any form of political organization that desires to challenge the status quo.

Due  to the flexible nature of populism, it will exist in some form for years to come. Political turmoil will never cease to drive political trends. Trump’s election indicates that America is still deeply divided; polarity and frustration go hand in hand. The very fact that a populist was able to rise to power in the country of democracy speaks to the fragility of the system and the strength of populism. Populism is seemingly the response to an ever growing community of discontent — skeptical people that have felt that the government has not heard them. Populism is so attractive to many because it validates the feeling of being left-behind in an ever changing political landscape that celebrates modernity and challenges tradition. Trump was, perhaps, a strong figure in populist leadership but he did not carry populism to the international stage. If anything, Trump took advantage of unstable political terrain to formulate a political strategy — one that relied on very effective emotions: anger and frustration.

The strength of populism was highlighted by the storming of the Capitol, following Trump’s loss in the recent federal election. On January 6th, Trump supporters, armed and carrying Trump merchandise, organised an insurgency bent on infiltrating the Capitol in protest of the election results, incited by Trump’s disbelief in his own loss. The attack on the Capitol is, perhaps, the realization of the fundamental theory of populism: the people against the elite and the institutions. The people that have been victims of liberal agendas, the pure and moral, are physically attacking the institution that Trump had claimed he was trying to change. The goal of overturning the results of the election highlights deep mistrust in the political system, which has been exacerbated by Trump’s incessant claims that he was robbed of the presidency. Trump not only based his electoral campaign on questioning the status quo of politics — he also increased this distrust as his last contribution to the American political landscape. This also indicates that the claim of institutionalized corruption in the American system, perpetuated by populism, can be used to justify violence. The ideals of populism infer that in the search for the establishment of the correct order everything can be justified. His rather populist reliance on the distrust of the many people in the government brought him to power and allowed him to literally attack the institution that eventually pushed him out of power. The attack on the Capitol is concerning, as it demonstrates that the faith in the democratic system in the United States is at risk. It also sets a precedent for future insurgencies that question the authority of the political institution. The surprising intensity of this storming of the Capitol indicates that support of populism is hardly declining.

In the current political landscape, nothing is certain. Despite the development of social justice movements and increased visibility with the proliferation of the media, our world remains quite polar. Just as all seems stable, a new wave of political ideologies will come crashing into the public eye. This puts into question many ideas that political theorists have explored, such as the importance of the state, the power of human agency, and whether humans are fundamentally peaceful or tend to engage in war. The rise of populism in response to an increasingly liberal world highlights the difficulty in reaching political stability. Perhaps tradition will forever clash with modernity and politics will always be fraught with incompatible political ideologies and theories.