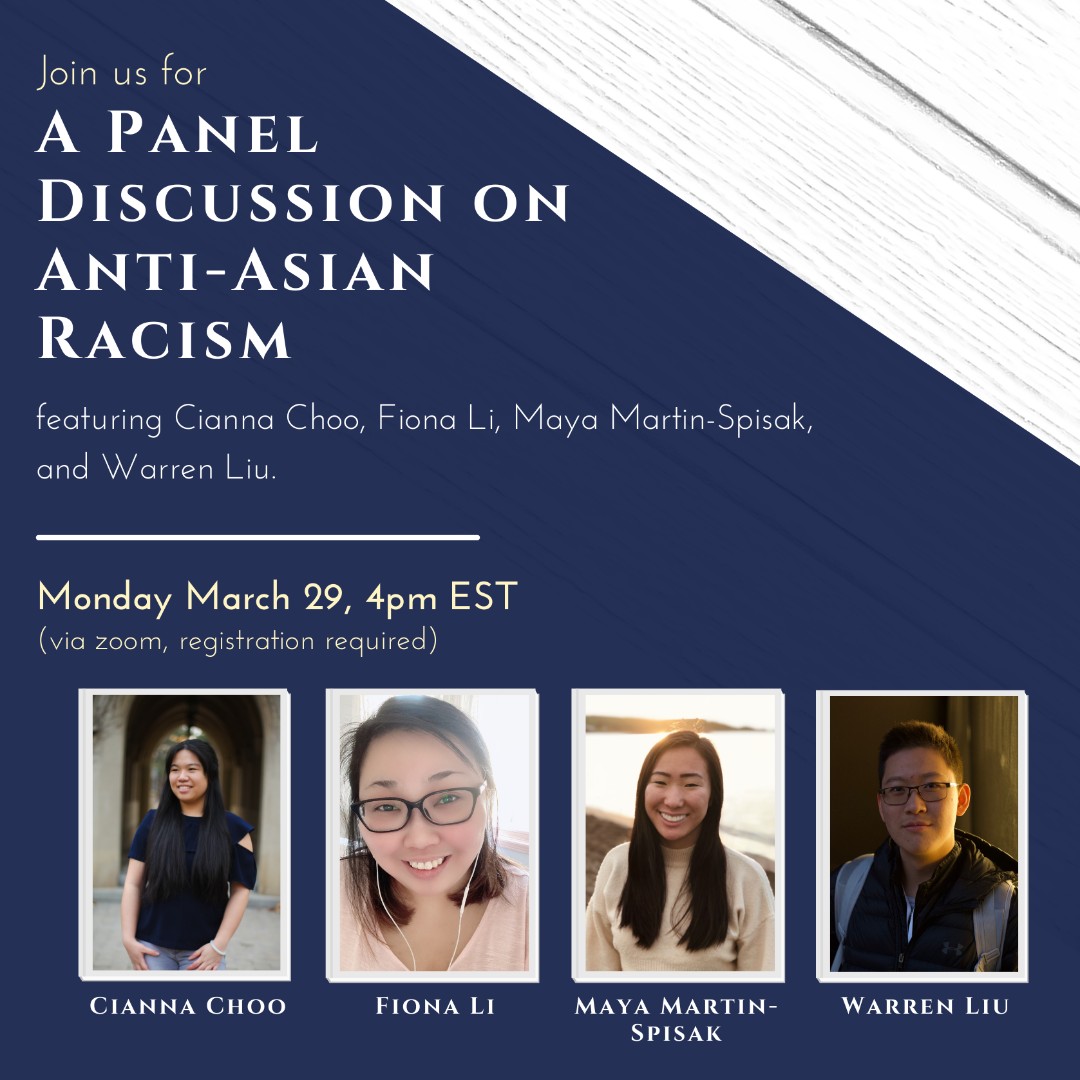 A self-reflection on St. Mike’s anti-Asian racism panel and the importance of speaking up

On Monday, I was privileged to serve as the facilitator of St. Mike’s Anti-Asian Racism Panel. I would like to thank Maya Martin-Spisak, Fiona Li, and Warren Liu for serving with me as panellists, and the St. Mike’s College (SMC) students who worked in the background to advocate for this event. Additionally, I would like to thank the Dean of Students Office for their efficiency and help in hosting this panel.

The inspiration for this panel was sparked by the violent events in Atlanta. Overall, this pandemic has emphasized the prevalence of Asian hate. There has been an increase in aggressive actions, avoidance, and hateful speech directed toward Asians, especially those of East Asian descent. This has been experienced by our own students living in Toronto. Our panellists spoke about times they had been avoided or jeered at while in class or walking around the city. Anti-Asian racism has been present in this country and others before the pandemic, but COVID-19 has highlighted how ignorance has led to violence and Asian hate sentiments.

However, anti-Asian racism goes beyond acts of violence or microaggressions like asking “where are you really from.” In addition to these, our panel focused on stereotyping and the detrimental effects they have on the mental health and development of individuals of Asian heritage. Stereotypes surrounding ideas like all Asians… “are good at math,” “are smart,” or “come from financially stable backgrounds” perpetuate the “model minority” stereotype and discredit the efforts and struggles of Asians. For example, it is extremely detrimental to a young learner to have their efforts, talents, and hard work in a school subject or a skill like music boiled down to “it is because you’re Asian.” Additionally, it marginalizes Asians who do not fit the stereotypes and can have deleterious effects on their sense of self-worth and ability to discover their own passions. Some Asians may feel like they do not live up to others’ expectations or feel deterred from pursuing their interests. I think another effect of the “model minority” stereotype is that it creates the misconception that Asians are “white enough” to escape racism. However, racism is “a belief that race is a fundamental determinant of human traits and capacities.” These stereotypes undermine the diversity of the Asian experience.

These stereotypes are perpetuated through the media and the limited portrayal of Asians. During the anti-Asian panel discussion, the panellists spoke about the over-sexualization of Asian women and their portrayal as meek and submissive in movies and shows. Additionally, an attendee highlighted how Asian men are emasculated in the media. Although it is amazing that Crazy Rich Asians has a full Asian cast, it alone does not encapsulate the full Asian identity or experience. There must be an increase in diversity in the portrayal of Asians and their lives in Hollywood. I think it is incredibly empowering for young Asians, especially those growing up in North America, to see strong Asian role models succeeding and being celebrated in the media. The lack of representation of Asian identities in the media is a barrier to the development and self-perception of Asians in Canada.

For me, I feel most angered by the monolithic assumptions made about those of Asian descent. Monolithic assumptions can manifest in two forms that strip Asians of their individuality and identity. The first is the lack of understanding and appreciation for the huge diversity of Asian cultures. There are many countries in Asia, each with its own traditions, values, and histories. Even countries that may have similar traditions or foods have their own unique flavour and customs. I identify as Chinese and Vietnamese. My grandmother often makes spring rolls, which originated in China. However, her filling is a Vietnamese recipe passed down from her mother. When an individual is mistaken for the wrong heritage, it is disrespectful and strips them of that part of their identity. It ignores their lived experience, family, culture, and sense of self.

The second is the ignorance of the individuality of each person. When a teacher mistakes one young Asian for another with the excuse of “you just look so similar,” it can make an individual feel invisible and destroy their sense of individuality and worth. When these two individuals look in the mirror, they can clearly identify the differences in their noses, their hair colour, skin tone, eye width, voice, and a million other identifying features that are, to them, as clear as having red hair. However, each of those is stripped from them with the words, “you just look so similar.” It is essential to challenge yourself to look further than the most obvious forms of identification and recognize the person you are looking at.

I, myself, can only speak to my own experiences and thoughts. I recognize that every person has a unique lived experience, and individual struggles, upbringing, and choices they make throughout their lives. I cannot speak for every person of Asian descent. Our anti-Asian panel recognizes the limitations of our discussion. We were unable to have full representation from south-east Asia, immigrants, or non-North American raised Asians. More work and discussions are needed to share the stories and unique experiences of individuals from these backgrounds.

One of the most important ways to combat anti-Asian sentiments and racism, in general, is through education. Knowledge allows one to appreciate the beauty of another’s culture, history, and lived experience. You can begin with being open to trying something new like food or music. However, it is not enough to appreciate what is produced by an Asian country. It is necessary to dig deeper into the identity of the people creating your favourite dish, song, or show. The Asian identity involves our upbringing, family values, mindset, and history. An Asian’s identity includes their unique lived experiences such as where they have lived, the people they have met, their parents’ teaching, their language, their identity as an immigrant, or being Canadian born. No two individuals have the same story.

The Anti-Asian Racism Panel was a great start to sharing some of those stories. However, we need to have more safe spaces for open dialogue and facilitating community. I felt so empowered to begin able to share my experience during the panel and hear the experience and opinions of the other panellists! It was so encouraging to have others listen and acknowledge what I had to say. Additionally, it is essential to make spaces, not just for non-Asians to learn, but for Asians of varying backgrounds to support each other, learn about each other, and work together to showcase the diversity in the Asian identity.

Finally, it is essential to bring your activism into your daily life. Think about how your words may land on another person and hear yourself through their lived experience. When you hear racism, you must speak out. It can be difficult when you are in a group of people who are comfortable with such as friends and family. However, it does not matter who is speaking; racism is never acceptable.