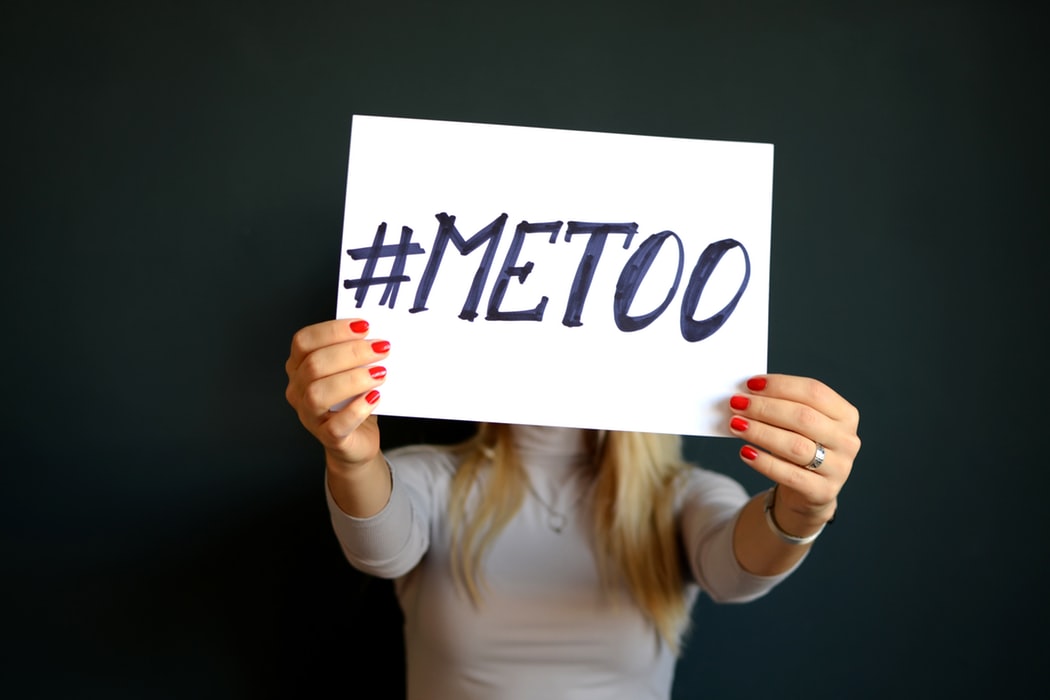 For our fourth issue at The Mike, we’re using #MeToo to speak about the movement, the experiences of those involved in it, the potential problems brought on by it, its depiction in the media, and ultimately, the massive discourse created by what once started out as a hashtag.

To give our readers a more personalized experience of day-to-day situations of sexual misconduct (whether it be verbal harassment or full-blown rape) I’ve been collecting stories from friends, acquaintances, and strangers — all with similar trauma and experiences of sexual misconduct. These are some of the stories. (Responses have been edited for clarity and remain anonymous to protect and respect the respondents).

“I was once working alone with older men at my former workplace, when one of my coworkers came up to me, groped my backside, and kissed my neck. I was 17.”

“I was at a nightclub with some male friends when a man of about 40 years cornered me and put his arms around me trying to talk to me. My male ‘friends’ watched and even encouraged him to continue.”

“I had just gotten a new job at a pool hall/bar and I was getting used to the place and the customer scene. A 30-year-old man was flirting with me and asking for my number. I tried to keep things light and made a joke about how I don’t give my number to 30-year-olds. He gave a small laugh and brushed it off. Later, I told my male manager about the situation because I thought it was creepy. Instead of agreeing with my disgust, he disapproved of my response and said my job is to flirt, not to brush them off. He told me I wasn’t even allowed to say I had a boyfriend.”

“When I was 16, the manager of the restaurant I was working at snuck up behind me and hugged me from behind. I was uncomfortable but let it go. Later that shift, he did it again for a longer time and pressed himself up against me. My coworkers all had similar experiences.”

“I had gone out with some people for a football game celebration, and we went to a couple of parties to drink and socialize afterward. I had been separated from my friends and these two girls I was left with brought me to a house where we didn’t know anyone. They left me there alone, but before they left, a boy asked to speak to me in the basement, which I presumed was going to be about his interest in one of the girls I was with. We spoke for a few minutes but as I started trying to leave, he became very touchy. He pulled me down to the ground and turned off the lights. I grabbed my phone to flash the light and find the door, but unfortunately my phone was dead. He pulled me down again and since I was drunk, I fell over. He got on top of me and though I repeatedly told him ‘no’ and that I wanted to go upstairs, he said it would be okay, that it would be fine. I told him I was on my period and I was in pain, but he continued. He turned me over and pinned me down, pulled up my skirt, pulled down my pad, and raped me. Since it was my first time and my body rejected him, he was trying hard to force himself in, but he couldn’t fully penetrate. He stopped and said we’d try again another time. I was stranded there for a couple of hours.”

“I was having a sleepover with a few friends, one of whom was a platonic male friend I was best friends with for a few years. Though other people were sleeping in rooms nearby, he snuck in, undressed me, and touched on and in my body until I jolted awake.”

“I invited a guy over for a movie. We started to kiss, and he thought that meant I wanted to have sex though I previously said I didn’t want to. I repeated that I still didn’t want to. He got on top of me and started taking my pants off and I kept saying no. He insisted that he knew that I wanted to and I was just shy, and I eventually gave in. After, he took a photo of me, naked, while I dressed so he could send it to his friends.”

“I used to work in a restaurant and would regularly get sexually harassed by the entire male kitchen staff. This included sexualizing all of the female serving staff and making violent threats, often referencing rape but claiming it to be a joke. No action was ever taken by management even though we expressed how uncomfortable we were on a regular basis.”

“Amidst one of many breakups with my high school ex-boyfriend, I went over to his house because I was feeling lonely. I just needed a friend. I woke up to him performing oral sex on me and trying to have sex with me.”

“In my first year of university I was added to my graduating year’s Facebook group where everyone posted a short bio of themselves. Once I posted mine, guys started tagging their friends in it and commented, ‘I would date rape her.’ I was also stalked for the first few months of university.”

“My ‘best friend’ at the time took me out of a party to get some fresh air because I was so drunk. He led me down an alley and pushed me between a shed and a trailer and raped me. He then called my boyfriend saying I was crying for no reason, and that he should come pick me up.”

“At 13 years old, I went to a guy friend’s house, alone. He ended up physically overpowering me, threatening me, and sexually assaulting me, despite my protest. He lied and told his friends we had sex. I was too ashamed to say anything, and when I tried to speak up to a friend of mine, she told me I must just be saying that because I regretted it.”

“I’ve been married for three years. My coworker is a newlywed. We’ve become friends. He texts me inappropriate sexual things and if I ask him to stop, he gets mad and tells me ‘it’s just a joke’ and I’m ‘not fun.’ He’ll send me photos of women wearing little clothing and ask me if this is what I wear for certain events.”

The first thing that can obviously be gathered from this array of testimonies is there is no singular experience of sexual misconduct, as it can be perpetrated by boyfriends, friends, family members, coworkers, bosses, or strangers. It can happen to anyone of any age. It can happen in any setting — professional work environments, social environments, and private environments. It’s important to acknowledge the variability of sexual misconduct because it helps victims to easily identify and understand what happened to them and why it is wrong — whether they were in a nightclub or their workplace. This conversation created by the #MeToo movement and the influx of public discourse surrounding sexual misconduct removes the shame and hopelessness many victims feel after experiencing sexual trauma.

One respondent mentioned the comfort that the #MeToo movement gave her, as it helped her see that others had experienced the same thing she had and had coped with the trauma. This constant support is needed for coping with trauma — something that may heal but always leaves a scar. The #MeToo community has created a space for women to talk about the mental and physical scars of sexual assault, and to support each other through shared experience.

Many of the responses I received were written in the present tense, despite the stories happening years in the past. This suggests that for many of these women, sexual trauma feels like it’s still happening; like they still have to worry, like they’re never safe. Many of these women were previously in the dark about what happened to them; though they may not have had the words to articulate their experience, their gut told them something was wrong. Creating a discourse about sexual misconduct and in turn, sexual propriety, allows struggling survivors to reconcile their gut feelings with the vocabulary of #MeToo.

It’s important to tell these stories; graphic details and all. It takes the conversation away from the numbers — one in five women will be raped in her lifetime — and bring these personal experiences into public discourse, fostering empathy within the larger community. It’s important that people feel uncomfortable when reading and hearing the graphic details of these stories because that’s exactly what they are: graphic, ugly, disgusting, and traumatizing. Simply hearing the number takes away from the variety of ways sexual misconduct can happen, the different places where it happens, and the different people who might commit these crimes.

Many respondents described themselves as naive, as “stupidly” assuming that nothing bad would happen. They believe they didn’t adhere to what society tells women and girls to do: to be wary of men, of strangers, to never go anywhere alone, especially at night. It places the burden of responsibility in the hands of the victim.

A common theme across these anecdotes is the struggle girls and women face to give a firm, assertive, immovable, non-negotiable “no.” Many women I know personally have struggled with this. They allow unwanted sexual situations to progress to please their partner, to avoid confrontation, and ultimately because they may not believe their voice matters in sexual situations.

This is not women’s fault; this reticence to say “no” is a product of a culture that erases women’s status as an active sexual partner, and instead paints her as a means to an end — sexual satisfaction. This brings new meaning to the word “objectification” which is popularly associated with the use of women as props in popular media or music videos. The use of the word “object” is banal at this point — I do not mean to use the word “object” to suggest that women are only dehumanized and used as props, but rather used as someone who sex is done to and not with.

Understanding women as people who are both allowed to desire sex and enjoy it ensures that sex becomes mutually pleasurable rather than something that women are supposed to endure until its end. This image of women as a means to an end is exacerbated by the depiction of women in sexual media.

To my own disgust and displeasure for the purpose of this article, I decided to inquire about word regulation on the massive pornography website that is PornHub. Fortunately, the word “rape” seems to be forbidden from inclusion in titles, but this does not extend to the frequent uses of “assault,” “used and abused,” “rag doll,” “whore,” and more. Comments are extremely disturbing on these videos, with numerous users expressing pleasure in seeing women in these degrading and dehumanizing roles. It’s not like these certain pornographic films are obscure either — all of them have millions of views. The purpose of these videos is to show women in submissive roles which explicitly label them as inanimate objects like “toy” and “doll.” It’s sick.

People in general and men especially can mobilize through holding their friends accountable, by adhering to safe sexual practices and rules of consent, and by participating in the conversation.