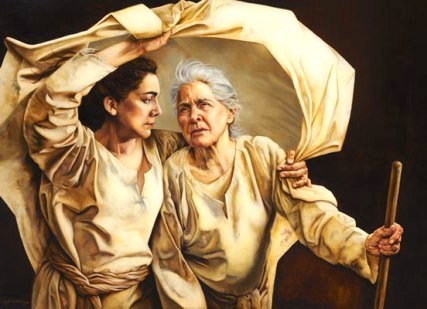 When thinking of women from the Bible, the first woman that came to mind was Deborah. Everyone loves a strong woman, an embodiment of who we want to be. Nevertheless, I will tell the story of a broken woman named Naomi, featuring Ruth.

Naomi had everything going well for her. She was a happily married woman with two sons, living comfortably in Israel. That was before the famine came upon the land, and she moved with her family to Moab. Some years later, her world came crashing down. It started with the loss of her husband, followed by her two sons. Suddenly it was just Naomi and her daughters-in-law, three widows reeling in loss and grief with Naomi taking the biggest hit. After much thought, she decided to go back to Bethlehem and gave her daughters-in-law her blessing to go their way and live a better life. This is where Ruth comes in. Ruth stood her ground and said, “For where you go, I will go, and where you stay, I will stay. Your people shall be my people, and your God my God” (Ruth 1:16).

“When they entered Bethlehem, the whole city was stirred because of them, and the women of the city exclaimed, “Can this be Naomi? “Do not call me Naomi, she replied, “call me Mara, because the Almighty has dealt quite bitterly with me.”  (Ruth 1:19-20)

Looking at the life of Naomi who was reeling from the blows that life had dealt her, we see as she spirals into a state of self-absorption in bitterness and grief. At this point in her life, she felt broken, leading her to change her name to Mara, meaning bitterness. A change of name back then determined a person’s life, circumstances, and purpose. The turn of events briefly summarized the great deal of pain, hurt and loss she experienced, and especially how she places the blame on God. Nevertheless, God continued to work.

The story of Naomi shows how life can sometimes give us blows and how we turn to place the blame on God. This is never the right solution. In Naomi’s case, her source of connection to God was still in place in the form of Ruth, whom God worked through in order to bring new hope into Naomi’s life.

This tells us the importance of surrounding ourselves with people or rather “Ruth’s” in our lives in moments when we are broken and want to be called Mara. Are you a Naomi in need of a Ruth or a Ruth meant for a Naomi? Are you a woman who uplifts others when they feel broken inside or are you broken and need some lifting? That is why we need to look at the people around us as it determines if we are giving way for God to work through them to get to us when we are broken or end up locking ourselves in misery, which was the path Naomi was intending on going down when she asked her daughters-in-law to leave.

Through Ruth, Naomi was able to give God her broken pieces which he turned into blessings. Ruth was able to marry and bore a son that became the light that sustained Naomi and marked the beginning of her restoration. People often said, Naomi has a son. Little did she know that her grandson would become the grandfather of King David and from that line, the birth of the Royal Saviour, Jesus Christ. That is how the hopeless and bitter widow became an ancestor of the Son of God. What better way to end a story?