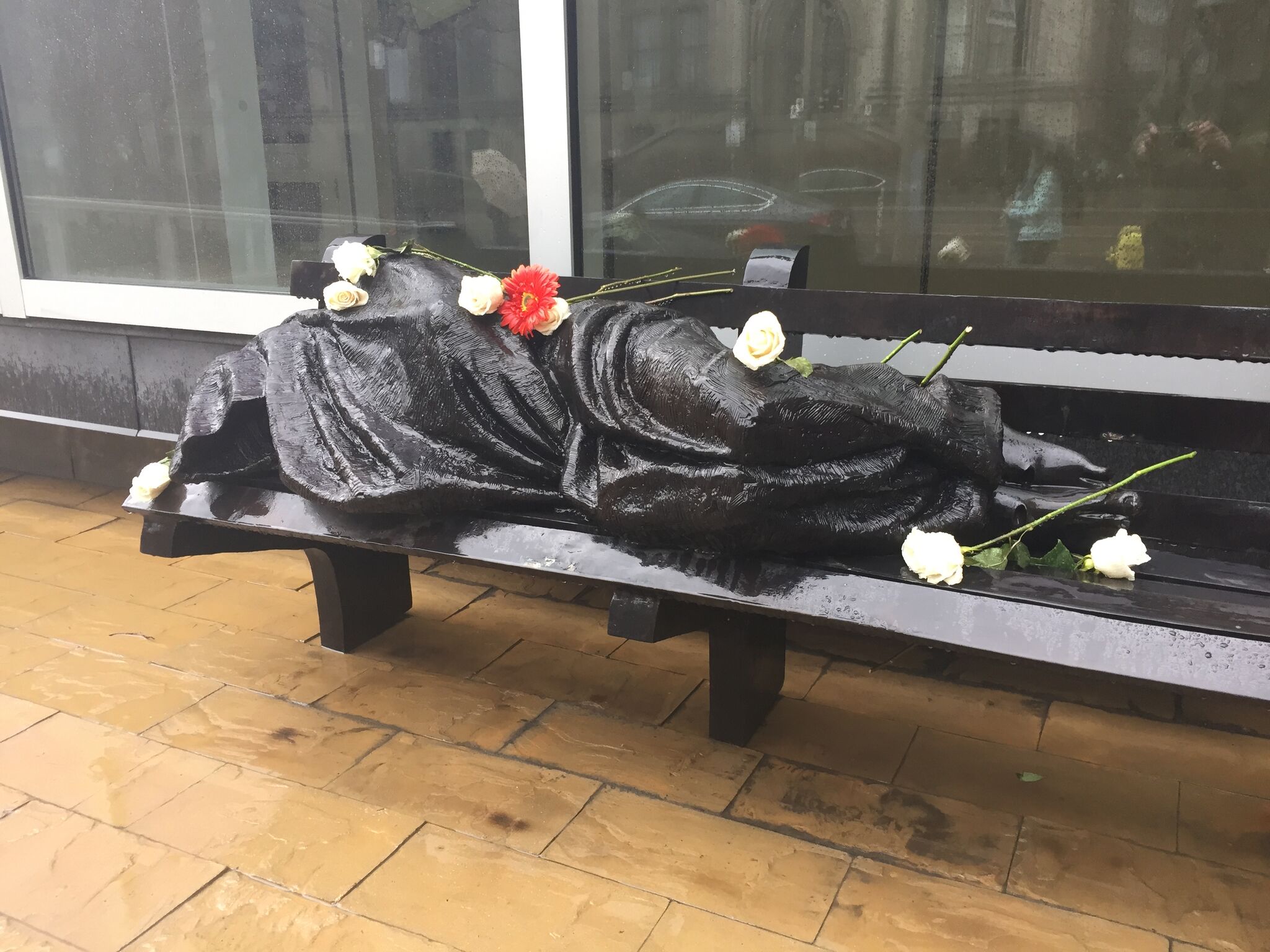 When walking past either Regis College on Wellesley or the Church of St. Stephen-in-the-Fields on College Street, it is difficult to ignore the bronze statue of Homeless Jesus. Draped in a blanket and sleeping on a park bench, it is not immediately clear that the image is of Christ except that there are visible wounds of crucifixion on his feet.

Created by Canadian sculptor Timothy Schmalz, the Homeless Jesus statues are at once striking and ambiguous: what is the significance of depicting Jesus as a Homeless person? Describing his statues as “visual prayers,” for over 25 years Schmalz has been exploring his devotion to Christ through his artwork as well as experimenting with art as a means of deepening his connection with spirituality.

The image of Homeless Jesus is jarring, and for some, disturbing, because the bronze statue is quite easily mistaken for a real person. This, coupled with the uncomfortable association of Jesus being reduced to a nearly unrecognizable homeless person, results in a mixed reception, which culminated in the theft and eventual return of the statue from the Church of St. Stephen in December 2013. Despite a few bumps, however, Homeless Jesus has been installed all over the world including Christ Church Cathedral in Dublin, St. Patrick’s Cathedral in New York, and on the Via della Conziliazione, which leads to St. Peter’s Basillica in Rome.

Perhaps the most striking feature of these statues if that by striving to be unobtrusive and unassuming, they achieve the opposite. By depicting Christ as a homeless person, the viewer is forced to re-examine their own biases about poverty and homelessness. It is here that the true universality of Christ is demonstrated: regardless of country or city, poverty is pervasive and can affect anyone. With at least 5,000 homeless people in Toronto alone, the statues of Homeless Jesus ask us to stop viewing those people on the streets as vagrants and instead begin viewing them as people in need and worthy of help.

These statues are globally acclaimed, and often interpreted as a visual representation of the Gospel of Matthew: “as you did it to one the least of my brothers, you did it to me,” and it is this sentiment that Schmalz is trying to convey: true empathy begins with a global attempt at aiding and accepting the marginalized.

Timothy Schmalz’s Homeless Jesus statues can be found at Regis College, 100 Wellesley Street West, and at The Church of Saint Stephen-in-the-Fields, at the corner of College Street and Bellevue Avenue.