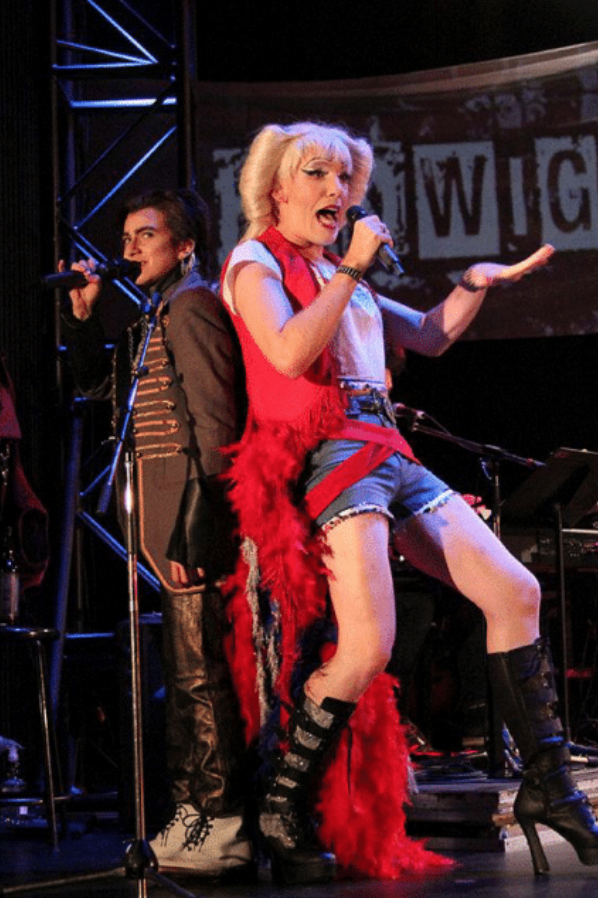 Lauren Mayer and James King in Hedwig and the Angry Inch

The 2017–18 season at Hart House begins with Hedwig and the Angry Inch, which first debuted Off-Broadway in 1988. It is familiar territory for director Rebecca Ballarin, who returns to Hedwig after a previous production at the U of T Drama Centre. Ballarin’s connection with the material is evident through the deft communication of theme and aesthetic.

Hedwig and the Angry Inch is the band that occupies the stage for an uninterrupted hour and forty minutes. In that time, we witness the confessional rock stylings of the lead singer, Hedwig Robinson (James King). Born a male resident of East Berlin, Hedwig’s escape was effected by a marriage with an American soldier who required a sex change. With that operation botched and Hedwig’s gender identity thrown into confusion, she reinvents herself as a rock star while searching for a theoretical alter ego who she hopes will complete her. As Hedwig’s put-upon husband Yitzhak (Lauren Mayer) bluntly instructs us, the star is not to be touched — unless she explicitly invites us to do so. Indeed, the show invites us to “touch” Hedwig, to empathize with an individual whose life story could hardly be more salacious, grotesque, and ultimately worthy of our attention.

Given that John Cameron Mitchell’s text crafts such a confrontational lead, Hedwig’s actor is faced with the challenge of asserting the singer’s outrageous persona as well as her humanity and respectability. Cameron Mitchell’s Hedwig presents a conviction in the rightness of her quest for love. King is at his most enthralling in the autobiographical monologues between musical numbers. The many disappointments of Hedwig’s career have twisted her self-acceptance into disdain and spiking rage. But throughout, King maintains Hedwig’s emotional openness as a virtue — her self-deprecation is knowing and warm, while her anger is affecting rather than pitiful.

However, King is somewhat weaker on the musical numbers. While numbers like “An Angry Inch” make good use of his lower register, the words of several other songs are swallowed. King’s previous turn as the Baker in Hart House’s 2016 performance of Into the Woods landed Sondheim’s exacting diction, which reflects in the great success of Hedwig’s monologes- monologues and her calmer ballads. However, the content of Hedwig’s more celebratory rock anthems is often incomprehensible.

The performance of Lauren Mayer as Yitzhak is a different matter. Relegated to the sidelines, Hedwig’s husband spends much of the show simmering until the anger explodes into misogynistic slurs. This is effectively shocking for the audience, which at the performance of Friday, October 6, reacted with anticipation for Hedwig’s retorts. It is worth noting how effectively Mayer builds Yitzhak’s importance. We first assume that Yitzhak is a kind of comical stage manager, monotoning the standard rules of live theatre and staring down giggling audience members. As the show unfolds, Mayer’s backup vocals soar over the rest of the arrangement and leave us wanting more. The increasing recognition of Yitzhak is key for Hedwig’s character development, an effect which is reproduced in the audience.

King and Mayer’s collaboration of contrasts results in the successful communication of the show’s themes. Hedwig’s identity crisis provokes the epiphany that selfless love is more constructive than her own need for completion. She bestows her wig on Yitzhak and encourages him to begin his own journey. Whether Hedwig finds her own satisfaction remains strikingly unclear, as she mysteriously transforms into Tommy Gnosis and exits. This is ultimately for the best, as the questions posed overtly throughout the show remain in suspense while the quieter plot line of Yitzhak and Hedwig’s personal rapport concludes cathartically. To this end, it is perhaps a thoughtful directorial choice to eliminate Yitzhak’s emergence in full feminine regalia, an episode that concludes most productions of Hedwig.