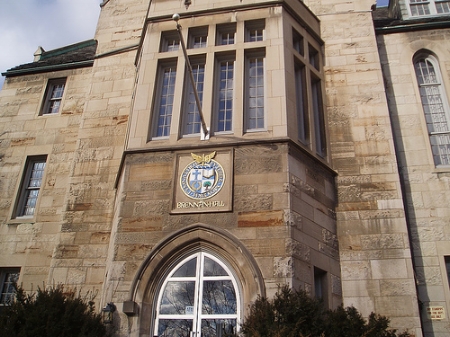 Brennan Hall to undergo major renovations in 2018, preliminary planning to start this fall

Renovations to Brennan Hall are set to begin in the spring of 2018, Stefan Slovak, Director of Communications at the University of St. Michael’s College (USMC) told The Mike.

Brennan Hall, USMC’s main campus student centre, has often been criticized for its lack of foot traffic. While Brennan is home to student lounges and many USMC clubs, among other things, the building still seems underutilized by USMC students.

“All too often, in the past two years, all we had were two empty rooms: Brennan Hall and the Coop,” USMC President David Mulroney said during the First Annual Meeting of the Collegium on September 20. The main purpose of the project, according to Mulroney, is to “relocate the Registrar’s Office to somewhere that is brighter, more accessible, and more student friendly.”

Slovak says that the goals of the project are highlighted by “enhancing Brennan Hall as a student-centered space,” enhancing study lounges and event spaces, “creat[ing] a hub for student services,” and moving offices such as Student Services, Registrarial Services, and offices for SMCSU and other clubs.

Gow Hastings, architects of the new Ryerson University Student ServiceHub, will be brought in to handle the project. According to Slovak, the project architects “undertook consultation with student, faculty, and staff representatives in early planning stages.” Further consultation with students, faculty, and staff have been promised, but the extent to which these representatives will be consulted is unknown and came without comment.

The preliminary parts of the project will start as soon as fall 2017. This phase will include “preparation of space for Registrarial Services.” Phase Two will begin in late spring of 2018, and will include the bulk of the physical renovations. The Coop and the surrounding offices will undergo renovation at this time.

“During this time additional space will be made available to students, including over- night study space in Teefy Hall beginning September 29,” Slovak told The Mike. This could be a concern to students because, despite the lack of foot traffic, it is still valued as a space for USMC commuter students in particular. It remains unclear how else USMC plans to accommodate students in the interim.

Some other question marks also remain. According to Slovak, “The budget for this project is [still] being determined. The final budget will depend on the extent of the renovations.” The project will be funded primarily by the President’s Fund for Excellence, which is funded by the annual USMC Golf Classic. The Golf Classic has raised over 2.4 million dollars since the event started in 2000.

“Alumni, faculty, and staff will be invited to support this project through a fundraising campaign,” Slovak said. He did not specify the nature of this campaign.

Sketches of the renovated Brennan Hall will be made available by the college in the near future.