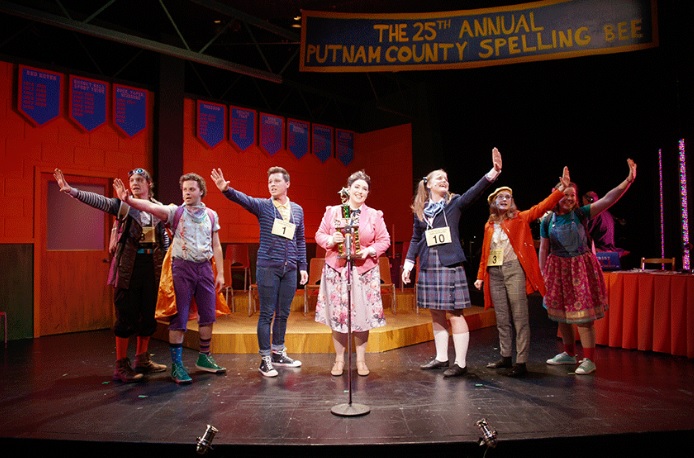 Hart House’s production of “The 25th Annual Putnam County Spelling Bee” stands as one of the best exponents of the theatre’s musical output in recent years. Director Cory Doran has assembled a team of vibrant performers and imaginative crew members who present a seamless and affecting portrait of childhood’s end.

“Spelling Bee” enjoyed its Broadway run between 2005 and 2008. Rachel Sheinkin’s Tony Award winning book is based on the improvisational play C-R-E-P-U-S-C-U-L-E. While the current incarnation of this story is mostly scripted, ad-libbed jokes and variant musical cues depend on the participation of four audience “volunteer spellers” who are invited to join the six students of the Putnam County Spelling Bee onstage. As explained by the production team in a post-show talkback following the Remembrance Day performance, the paramount role of the audience in this musical demands a range of prepared and spontaneous reactions from the cast, stage crew, and band to ensure that volunteer spellers participate to comedic effect without winning the scripted endgame. Suffice it to say, the improv is pulled off with aplomb.

Given the unusual number of variables in this fairly complex show, it is all the more impressive that Doran’s team manages its intricate task. “Spelling Bee” commits to its status as musical theatre with continual outbursts of song and dance reflecting the emotional turmoil of the characters. The material is ripe for such turmoil, as the context of a middle school spelling bee presents poorly socialized pre-teens and equally repressed adults whose issues around perfectionism and encroaching adolescence manifest within this competitive environment.

These are kids who enjoy winning, a value which ultimately threatens to inhibit the growth that is coming. Incumbent champion Chip Tolentino, played by John Wamsley, is shown as the confident, groomed leading man until puberty causes his panicked and hilarious loss of control. Marcy Park displays her commitment to absolute perfectionism with a catalogue of mastered skills that speak highly of actress Braelyn Guppy’s control and versatility. Each student represents one facet of the pressure felt at this critical turning point, a pressure which explodes into the ambitious and flawless group dance numbers “Pandemonium” and “Woe Is Me”, choreographed by Sabrina Hooper.

As each kid fails to spell a word correctly, they are played off to the accompaniment of their peers’ relieved singing of a “Goodbye” tune. One by one, the colour-coded characters exit. Two of the women are, however, similarly attired: neglected Olive Ostrosvsky, played by Vanessa Campbell, wears the same flowery skirt as the Bee’s facilitator, Rona Lisa Peretti, played by Amy Swift. The running theme of refusing to emulate your parents’ flaws is crystallized through this parallel as Swift dons a shawl and assumes the identity of Olive’s absent mother for “The I Love You Song.” This is the most astonishing moment of the production, as Swift and Campbell sing in a three-part harmony with Carson Betz, who is in many ways the show’s secret weapon, playing Olive’s dad, forming a marvelous wall of sound that lands the impact of Olive’s conscious fantasizing.

As comfort counselor Mitch Mahoney, also played by Betz, remarks when faced with the revolting kids, “Pain has degrees.” The learning process to achieve that perspective involves some appropriate growing pains. Every aspect of this production perfectly reflects the shiny, polished awkwardness that characterizes both spelling bees and musical theatre.