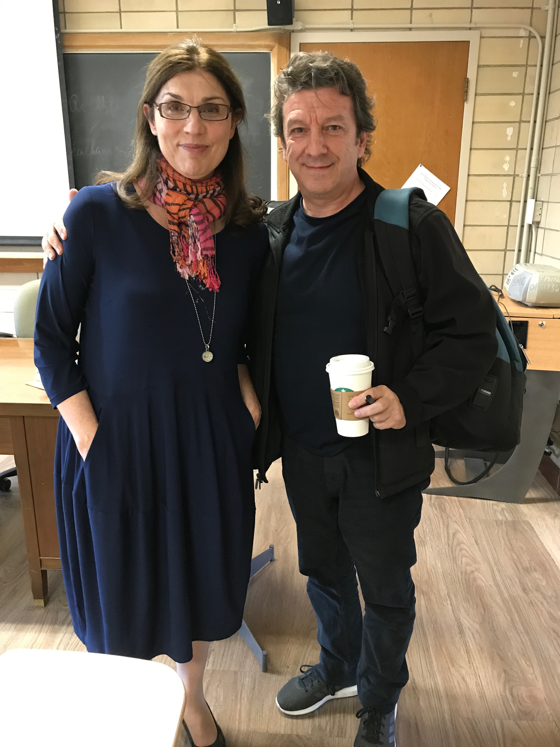 Acting (in) Calabrian, A Lecture by Anna Miglarisi

On October 19, 2017, Professor Anna Miglarisi hosted her second of three lectures based on Italian-Canadian plays and playwrights. Her lecture titled Acting (in) Calabrian took place in the main Italian Department building, Carr Hall, in room 406.  She is and expresses her history as an Italian-Canadian, specifically from Calabria, Italy. Professor Miglarisi is a producer, director, writer, private coach, and most importantly, she is a teacher. Professor Anna Miglarisi obtained an undergraduate degree from the School of Dramatic Art at the University of Windsor as well as earned a Masters and a PhD with distinction from the University of Toronto. Miglarisi is a very well published scholar in literature and is known to be a respected woman within the theater community. A valued director and prized teacher, Professor Anna Miglarisi directed Henrik Ibsen’s A Doll House, Luigi Piradello’s Six Characters Looking for an Author, Sophie Treadwell’s Machinal and many other modern classics for the Acadia Theatre Company.

Professor Anna Miglarisi teaches one of the many Italian courses U of T offers, called Italian-Canadian Plays and Playwrights. In this class, she teaches the importance of the what and how within a play, as well as central themes and importance of Italian heritage within the plays that are required. Professor Anna Miglarisi is very proud and honoured to have collaborated as an actor, producer and dramaturge for more than 30 years with award-winning actor and playwright Tony Nardi on very historically significant productions, including A Modo Suo (A Fable) and Two Letters…And Counting! Her lecture on October 19 focused specifically on his play A Modo Suo (A Fable), a 1990 production written and presented entirely in Calabrian.

Anna Miglarisi and Tony Nardi had first met in 1982 when he had offered Miglarisi a small part in a play. Due to both actors being born in Calabria, Italy, they befriended each other instantly and had worked together on many projects. Maglarisi and Nardi were taught that speaking the dialect of Calabria was seen as shameful, and it was known that it was better to just not say anything at all in their native tongue. After realizing there is nothing to be ashamed of, both actors accepted their roots and put on a show. A Modo Suo (A Fable) was seen as uplifting due to it being presented solely in Calabrian because this was a language many saw as appalling. The play gave the audience a sense of community due to the fact that the language in the play was something people did not feel comfortable speaking.

The Italian-Canadian Plays and Playwrights class also speaks of Tony Nardi’s classic play, Two Letters… And Counting! published in 2007. This outspoken theatrical monologue is composed of three separate letters, containing some actors struggles with cultural stereotypes in Canadian theatre as well as the challenges and fallacies by present day theatre critics and directors. The piece takes the audience through the struggle of Italian-Canadian actors and the stereotypes that come along with them, including family and immigration struggles. Nardi makes it very clear that this is not all that it means to be Italian, although it does play a big part, it does not define the Italian community.

In the series of three lectures, Professor Anna Miglarisi speaks about the history of Italian plays and where they had come from as well as their significance to the Italian-Canadian community. She shows she is very well known in the theatre community with her contacts and knowledge concerning the struggles of Italian-Canadian actors and their playwrights.