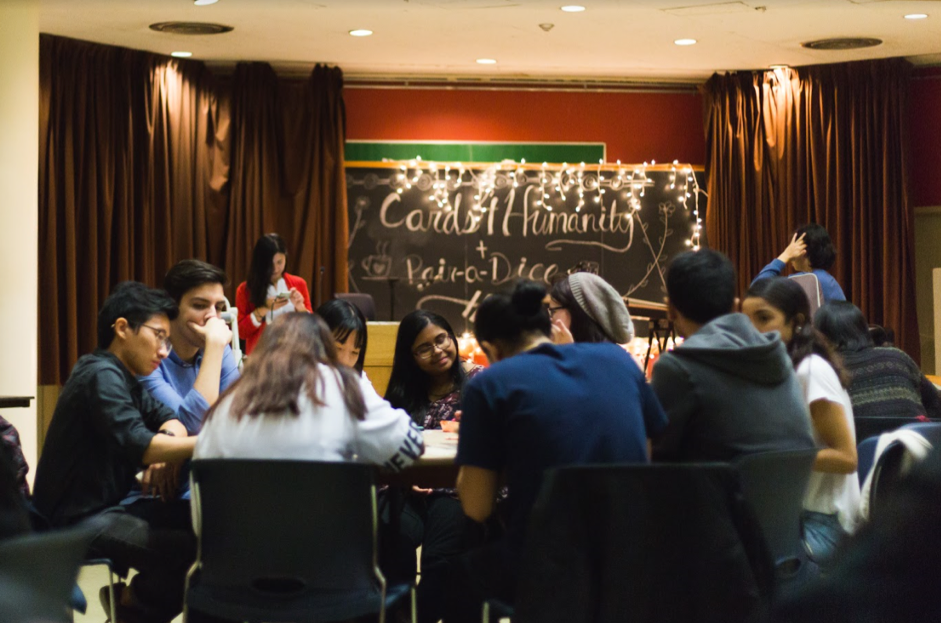 Cards4Humanity and Pair-a-Dice Collaborate for a Good Cause

On Thursday, October 19, two of UofT’s clubs collaborated to host a Coffee House event in Sam Sorbara Hall. The event hosted by Cards4Humanity and Pair-a-Dice was to raise money and awareness to aid the homeless population of Toronto. Guests at the event were invited to play a large variety of board games, listen to intriguing performances and, of course, indulge in coffee, tea and cookies. The night was an interactive and fun way to relax and forget about typical school struggles as well as provided an opportunity to donate to a great cause. There were amazing performances from different singers and instrumentalists who played instruments such as the Guqin, the Guzheng and many more!

Cards4Humanity is a club which aims to eliminate the negative stigma surrounding donating money to those who are homeless and living on the streets. To do this, the club hosts events throughout the year to raise money which is then used to provide gift cards for the homeless. Not only is this an incredible way to help those who are less fortunate, it also gives donors a reliable way of knowing where their money is going while also allowing the opportunity to provide a sense of dignity and respect to those on the streets. Cards4Humanity is open to new members and meets weekly on Wednesday’s from 4-5 in UC148.

Pair-a-Dice Gaming is the first board game club at UofT. This club possess a collection of over 50 board games, including games such as Codenames and Crabs Adjust Humidity, a spoof of the original card game Cards Against Humanity. Their purpose is mainly to create a comfortable, safe and fun environment for people to drop in on their free time to mingle, play games and meet new people. Pair-a-Dice is an amazing way to meet new people and create a bond over games, fun and good conversation. The club welcomes everyone, and encourages everyone to feel free to drop in on Tuesday’s from 3-5 in the Hart House, and Friday’s from 12-6 in Brennan Hall.

With a little over 3 weeks of planning, preparation and organization, Cards4Humanity and Pair-a-Dice’s amazing club members created a remarkable event that connected different people for a good cause. The event was an enjoyable and memory making occasion where different people could meet up, make new friends, play board games and know that their $5.00 entry fee was going toward a good cause and helping those who are less fortunate.

The Coffee House event was an unprecedented success while still offering students a great way to de-stress from school, midterms and exams while donating their money. The performances by those who volunteered their time were extravagant. Despite some technical difficulties with the microphone, the performers continued to entertain the audience and provide background music for those playing the games.