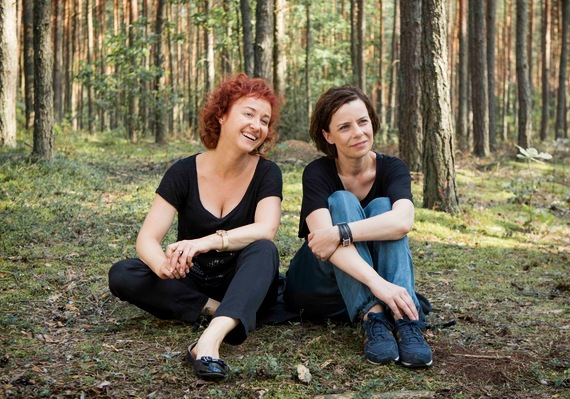 When those who gave us life aren’t here anymore

The need to face up to the tragic death of one’s parents is at the centre of Kinga Dębska’s new film, These Daughters of Mine. Presented in Toronto for its Canadian premiere at The European Union Film Festival (EUFF), the film follows Marta (Agata Kulesza, Ida) and Kasia (Gabriela Muskała) – sisters and polar opposites. Marta is a TV actress who goes about her business alone, often donning a tracksuit; Kasia is an elementary teacher with a much flashier and extroverted side to her than her famous sister. The elder is bitter and ill-tempered, the younger fragile and caring. “One of us has to have been adopted”, says Marta at one point. Early into the film, their mother (Małgorzata Niemirska) unexpectedly falls ill. This forces the sisters to work together and take care of their elderly father (Marian Dziędziel), who, by a stroke of bad luck, falls gravely ill soon after their mother. At first glance, this presents a dramatic scenario, but nonetheless, it is one which will also make audiences smile. “Life’s ups and downs should be approached with humour, above all the definitive things in life,” director Kinga Dębska stated at the presentation of her film as part of the Official Selection of the 10th Rome Film Fest this October. This is something which comes more naturally to the disillusioned Marta than to Kasia, who is too set in her role as the caring and good daughter.

Ultimately, the heart of the film is the contrast between the two sisters: “The film was born out of my need to face up to the tragic death of my parents, but the sisters you see on screen aren’t me and my sister”, points out Dębska, “the actresses put a lot of themselves into the role, basing themselves on real-life situations. In a sense, they’re co-writers of the film”. Visually, the film achieves harmony thanks to cinematographer Andrzej Wojciechowski drawing “inspiration from Japanese art, zen, [and] paintings from the 15th century,” which results in “basic compositions, long sequences, wide shots; a calm observation of reality”. This is evident in the film and provides a sincere snapshot of life which is easy to identify with as a reflection on family ties, lasting conflict, and what happens after when those who gave us life are not there anymore – intertwined with the reality of hospital visits, meetings with doctors, and whirlwinds of emotions between hope and resignation and everything in between, family fights, moments of endearment, and existential balances.

Whether you are an only child or one of many, you will find yourself leaking tears in no time as you’re forced to face the reality of your own parents growing older, but also laughing through sobs as a family so broken slowly mends itself together in the wake of tragedy.

This is the Polish director’s second fictional feature film work in the film industry.

These Daughters of Mine has thus far won seven awards and been nominated for nine internationally, winning the Audience Special Award and Best Screenplay Award at the Eagles Polish Film Awards (the Academy Awards of the Polish film industry).

The European Union Film Festival (EUFF) came to Toronto’s Royale Cinema November 10th to 24th, showing over 25 films from many countries with subtitles. The official European Union Film Festival strives to reflect the excellence, innovation, and diversity of European cinema in Toronto, the world’s most multicultural city. Founded in 2004 as a salve to Hollywood monotony, this festival showcases contemporary films drawn from each of the EU’s member countries. EUFF is a unique festival and the only one in the world to bring together disparate EU Consulates and local cultural institutes for collaboration.