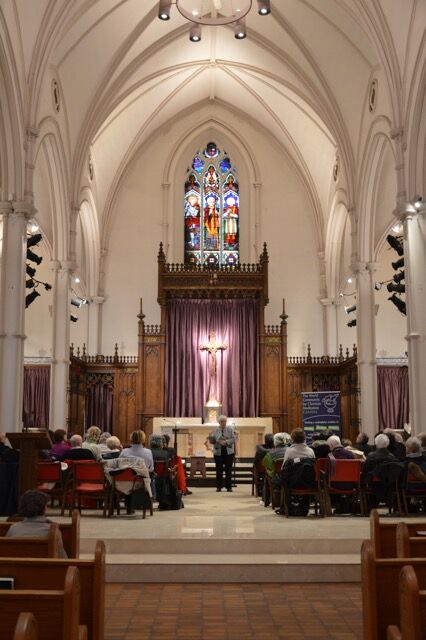 There’s a lot to be said about SMC, some good, some bad, some scandalous, and some stunning as well. Let’s talk about St. Basil’s Cathedral. Characterized by its looming, neo-gothic stone facade, it’s a space frequented by devout U of T students as well as neighboring observers. Despite its historical significance within Toronto’s catholic community, many students have never experienced the interior of the church, adorned with grandiose vaulting and stained glass windows.

These windows are particularly splendid, allowing light and colour to illustrate the iconography behind the church’s conception. A triptych lies behind the high altar. Designed by Nathaniel Theodore Lyon for the oldest stained glass company in the Western Hemisphere—Robert McCausland, Ltd.—the triptych shows three major figures in the church: SMC’s patron saint, St. Michael, the Basilian Fathers’ patron saint, St. Basil, and the second Rector of SMC, St. Charles Borremeo.

A rose window sits on the other end of the chapel. A newer addition to the church, Edward Low, also of McCausland Ltd., designed this window. Completed in 1985, it depicts the Holy Spirit surrounded by relics and symbols from the Holy Scripture.

Both the east and west walls are lined with stained glass windows depicting significant figures from biblical stories, including Jesus, Peter, Paul, and the Virgin Mary. These additions were constructed between 1877 and 1906 during a series of renovations undergone by the church.

The grandeur of the church is not isolated to the chapel. Father Rudy Deimer commissioned two stained glass windows over the two main entrances in 1947. Both were designed by James Meehan and depict Christ’s Resurrection and the Coronation of Mary.

The windows of St. Basil’s continue the gothic tradition of depicting religious imagery using stained glass. The religious significance of illuminating such stories and figures through light and colour is plain to see and helps solidify the might of these legendary stories in the eyes of the church and their followers.

Places of worship have always been centres for artistic expression and larger-than-life celebrations of godly figures, and St. Basil’s is no exception. Within U of T’s St. Michael’s College, we have our very own concentration of stained-glass beauty, open to the public. Regardless of a viewer’s religious affiliation, these windows are worth a glance, and they are best seen from inside, where the light can truly illuminate their heavenly tales. So the next time you’re wandering around St. Michael’s College, make sure to drop in and check out these gems.

Editor’s Note: This article is the fourth of a five-part series all about the design of St. Michael’s College and the University of Toronto at large. It is my hope that these pieces will provide students with information about things they may see or walk past every day without really noticing or considering. I encourage everyone to slow down, observe, and take in the beauty, genius, and meaning built in to the art and design that constantly surrounds us. As we are reminded by 99% Invisible’s Roman Mars: “Always Read the Plaque.”

The first part of this series—an article about SMC’s oft-ignored sculpture collection by Samantha Rose—can be found in the November 2nd 2016 issue of The Mike.
The second—an exposition of the Gothic architecture of the St. George campus by Angela Feng—is in our November 30th issue.
The third—an elucidation of Timothy Schmalz’s Homeless Jesus statues by Laina Southgate—is in our January 26th 2017 issue. Visit issuu.com/readthemike or readthemike.net for more.