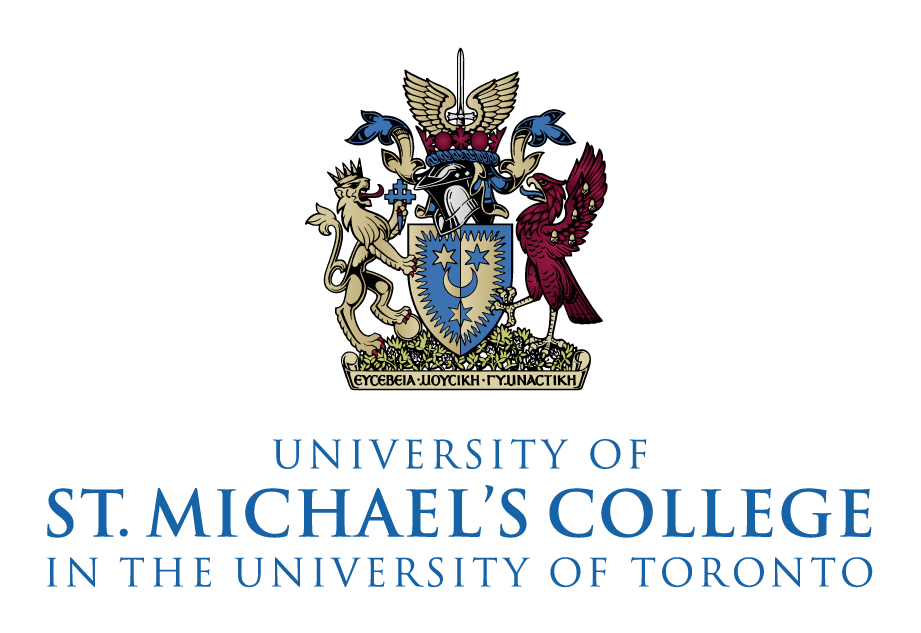 Upon looking at the St. Michael’s coat of arms during finals season

In this highly competitive academic environment, at this aggressive time in our scholastic year, it feels prudent to analyze the collection of symbols employed to represent our College on our imagined battle armour.

Many of the symbols in the coat of arms are rooted in Christianity, which is to be expected from a College named after a Saint, but even if you do not have a connection to religious beliefs these symbols can be meaningful. One of the co-founders of St Michael’s College is Armand de Charbonnel, the second bishop of Toronto, who was also the only French person to ever hold that position. These Christian symbols (the crescent moon, the cross and the Psalm 118 inspired motto at the bottom) can be interpreted as commemorations to the French man in an English city, who tried to unite the two languages and cultures of Canada at the time.

Another common theme in the symbols of the coat of arms is the land on which the College stands. The eagle supporter on the right side of the shield is in recognition of Hon. John Elmsley who gave land to the College. The symbol of the eagle was chosen because it also appears in his family’s coat of arms. The land is also symbolized in the literal ground that the supporters stand on (referred to as the ‘compartment’ in proper heraldic terminology), which represents Clover Hill, the land on which the first St. Michael’s building was constructed. Although it is respectful to know the intended meaning behind these elements, another approach can be taken. It is important to be grateful for this land we use and rarely think about, located right in the centre of Toronto. The eagle and the green hill are versatile symbols; they are representative of the land and those who gave it to us. In these images we can see the lineage of this land. This land has a history that stretches far beyond the history of the College and the University and to be reminded of that is humbling in the best sense.

Looking at last to the centre of the coat of arms, there is the helmet. This connects with the shield and the stars (or spurs) on it to remind the viewer of the original reason for such symbols, to be able to identify your people in battle. We as students are obviously not in battle, but an aide in identifying who is on our side and who is the enemy is perhaps something we still need. We are not at war with our peers, we are not at war with our professors; these people are our allies.

The St. Michael’s coat of arms is a lion, a symbol of strength and nobility, which supports the shield on the right side and represents Sir William Mulock, a man who aided in bringing together the University of Toronto.

Editor’s Note: This article is the last of a five-part series all about the design of St. Michael’s College and the University of Toronto at large. It is my hope that these pieces will provide students with information about things they may see or walk past every day without really noticing or considering. I encourage everyone to slow down, observe, and take in the beauty, genius, and meaning built in to the art and design that constantly surrounds us. As we are reminded by 99% Invisible’s Roman Mars: “Always Read the Plaque.”

The first part of this series—an article about SMC’s oft-ignored sculpture collection by Samantha Rose—can be found in the November 2nd 2016 issue of The Mike.

The second—an exposition of the Gothic architecture of the St. George campus by Angela Feng—is in our November 30th issue.

The fourth—an explication of the beautiful stained glass windows of St. Basil’s Cathedral, also by Angela Feng—is in our March 16th issue.

My sincere thanks as Arts Editor go to these talented writers for indulging me and my experiment.