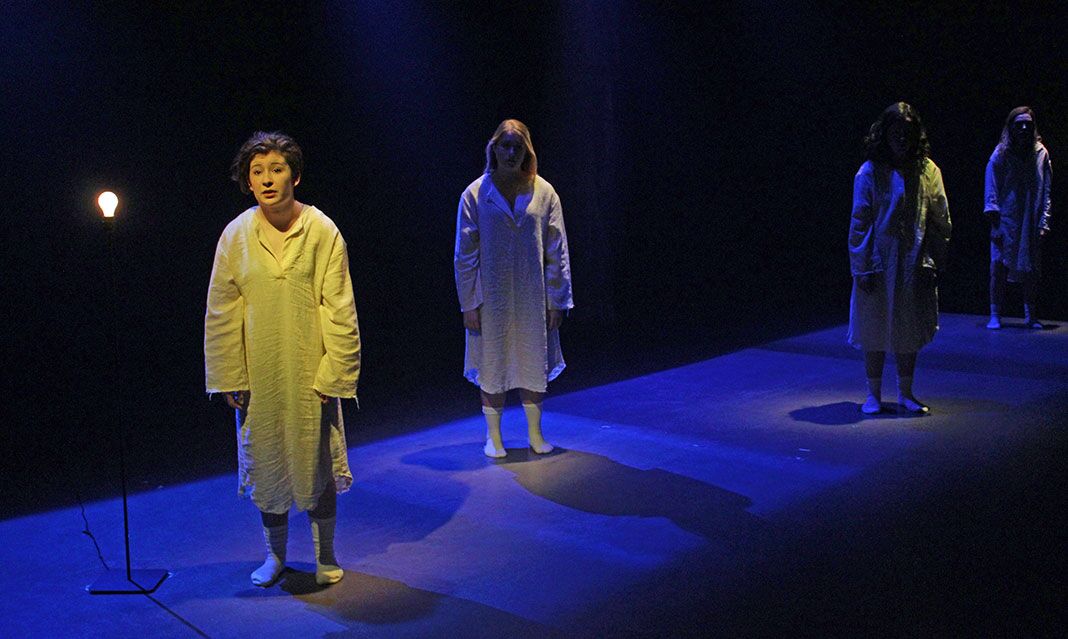 As a long-time Beckett fan, I entered the theatre on—appropriately—St. Patrick’s Day with reservations and high expectations. Beckett’s brand of absurdity is very easy to do poorly. Alter his meticulous stage directions at your peril, intrepid theatre directors of the world, lest the purists hang you out to dry.

A sense of eeriness hung in the air as the audience entered, shown the way by two statuesque men, faces painted white with powder, wearing long, white sleeping shirts. The audience has herded into a circle in the middle of the floor and locked in with translucent curtains as the lights dimmed into nothing. A deafening and consistent bass note rung out and the tension was palpable. For several minutes we stood waiting, watching where we thought the stage was to be. As it turns out, that’s exactly what they wanted: misdirection. As soon as the bass cut, ten women stepped from the darkness on all sides of the audience, completely unexpected, and began, in near-perfect simultaneity, to recite Not I, only their mouths illuminated by spotlights.

Here’s the first thing that came into my head. Not I is, as Beckett specified, a monologue. One woman is to recite, her singular mouth suspended in blackness eight feet above the stage. And here we had ten. As the scene progressed, I considered the director’s motivation. Actors began to falter, but only slightly, and their slack was picked up by their fellows. Perhaps, then, it was a strategic, rather than stylistic, choice. A long, unbroken monologue still progressed, if occasionally incomprehensible. The purist in me was not thrilled, but I saw the merits and advantages for what they were. When the women screamed it was deafening and unnerving. When they were totally in sync it felt overwhelming. If their mission was to use this veritable gang to get under our skin, they succeeded.

We were directed to seats so the remainder of the production could commence, and the second piece to be staged was Without Words II, a production that went on almost completely by the book. Two sacks and a pile of neatly folded clothes sat on the stage, and when a stick came from stage left to poke a sack, a man emerged. As is indicated by the title, this silent production commenced, aided by music. When the first man retreated back into his bag, the stick emerged again and poked the other bag. Another man, another demeanour, another cut of music to fit his vastly different character. If my purist was offended by Not I, it was satisfied by Act Without Words II.

Next on the docket was That Time, a radial alteration from the source material and Paolozza’s chance to flex his interpretive muscle. What is meant to be the work of two actors was split into seven, who played invented characters. What was meant to be a claustrophobic, confrontational experience was spread over the stage, and spotlights reminiscent of Beckett’s short play titled Play illuminated pairs as they spoke. The actors never missed a beat in this performance, coming in and out in perfect time with their spotlights. A distant departure, but nevertheless well-staged. The wide, painted smiles that the actors wore as all three of the spotlights came up was severely unsettling, an apparent objective of the production.

As if in a purposeful pattern of devotion and deviation, Come and Go was staged with near-flawless adherence. Another translucent curtain was pulled between the audience was the three actresses, as if emphasizing Beckett’s instructions that their faces not be seen. (I hope that one unfamiliar with Beckett is starting to understand why his drama is referred to as absurd.) The costumes, unusually specific given the other short pieces of the evening, were on point.

Last up was A Piece of Monologue. It conformed to the aforementioned pattern, but not much else: a radical divergence. The monologue, meant to be delivered by an old man, was given to four young, female thespians that split the burden evenly. A theme Beckett used quite often is repetition; even endless repetition; even forced and endless repetition; even slightly deviating and forced and endless repetition. (Think Happy Days, Play, Endgame, etc. etc.) This version had the actress reach the end of her respective portions and retreat slowly to the rear of the stage, as the woman behind her came up to the front and picked up where she left off. This repeated four times, suggesting that, as the first actress made her way back to the front, the entire monologue would begin over again, like they were trapped in a hellish, unbreakable loop. Not Beckett, but definitely Beckettian.

These three aberrant dramaticules, blasphemous as they may have been, reminded me what I love most about theatre: cooperation and collaboration. Beckett’s frankly intimidating short plays seem much easier to handle if your comrades are at your side, ready to cover your mistakes or divide your part into several. A cast of 12 actors is a formidable team, and it’s better to stage the plays in an accessible way than not stage them at all. After all, this is but amateur theatre and should be critiqued as such.

Power to the people.