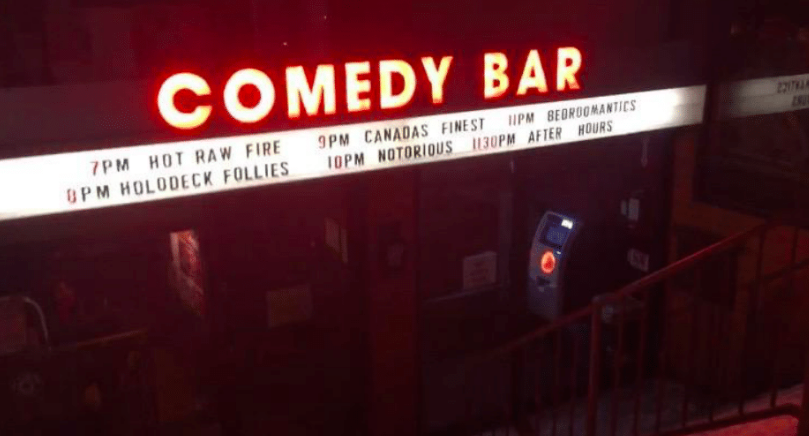 Canada’s Finest at the Comedy Bar

Is it me, or have Saturday night outings gotten boring? There are only so many times you can walk around Eaton Centre or go see the latest movie. Next time you and your friends are looking for a new place for a Saturday night hangout, I would like to suggest you go to the Comedy Bar on Bloor Street West. Providing endless laughs seven days a week, not only is there stand-up comedy, but also improv, sketches, and alternative comedy hosted between two stages every night. Toronto’s premiere venue for comedy is a great place for a typical Saturday night, date night, or even a birthday party. On January 13, I had the privilege to attend the sold-out show Canada’s Finest at the Comedy Bar. Empire Comedy Live presented a celebration of some of Canada’s very finest stand-up comedians. The evening show featured the star of CityTV’s Sunnyside, Pat Thornton, and Comedy Central actor, Arthur Simeon. Both comedians delivered half-hour routines that brought the crowd to tears.

Thornton was the first act to be introduced that evening. Thornton is a comedic veteran from Ontario whose resume includes multiple performances at Montréal’s Just for Laughs Comedy Festival and the Winnipeg Comedy Festival, as well as multiple starring roles on CTV and The Comedy Network. He is a founding member of The Sketchersons and has a new 2017 stand-up special for The Comedy Network. Thornton warmed up the crowd with a bit about email, and how tedious it has all become. The comedian doesn’t understand why Old Navy keeps sending the same email about the same jeans, and why KFC needs to know how they did. He also stated that he had recently gotten married, which meant, you guessed it, wife jokes! He also reminded the audience that after wife jokes came divorce jokes, but he didn’t want to get too ahead of himself. He ended his stand-up act explaining his confusion about the excitement for the new Toyota Corolla because that, in itself, is a joke.

“For those of you who haven’t seen my show before, it’s going to be delightful. For those of you who have: suck it up.” The second act of the night was Simeon. Simeon has travelled from Winnipeg to Halifax to perform in multiple comedy festivals. Originally from Uganda, Africa, the stand-up comedian has done multiple performances for Just for Laughs and CBC’s The Debaters, as well as contributed to The Comedy Network, CTV, MUCH, and more. He has participated in HBO Canada’s Funny As Hell and is quoted as being “one of the smartest stand-ups around” by NOW Magazine.

Simeon explained what it was like growing up in Uganda, a place where having electricity was common, but owning a microwave constituted bragging rights. He grew up with three older sisters and stated that yes, he had been in a dress multiple times and that because of his sisters, he has impressed many women with his ability to paint nails and braid hair. He’s a self-proclaimed expert on “girl drama” and knows just how important the bathroom can be to an adolescent female. His time in Uganda gave him a unique perspective on our Canadian lifestyle as well as a satirical take on the heated political environment of the United States. Simeon also talked about the upcoming Black Panther movie along with topics ranging from H&M’s latest advertising foul up, to sensible commentary on the current state of racial discrimination here in Canada. Simeon jokes that if a black man were to break into your house, the most he would take is spare change and other valuables. If a white guy broke into your house, he would hack into your Wi-Fi network and access your security systems and computers. Then, he’d learn your schedule and stalk you on social media. He’d steal your identity and keep you locked in his basement for four months. With that, he gave the crowd something to think about next time someone stereotypes an African American as being a “criminal.”

The Comedy Bar on Bloor Street West is a perfect Saturday night outing with friends or even those family members with a sense of humour. Booking tickets in advance is always a good way to go, and it provides some extra time to eat and drink before the show starts. Visit comedybar.ca for tickets and show information.