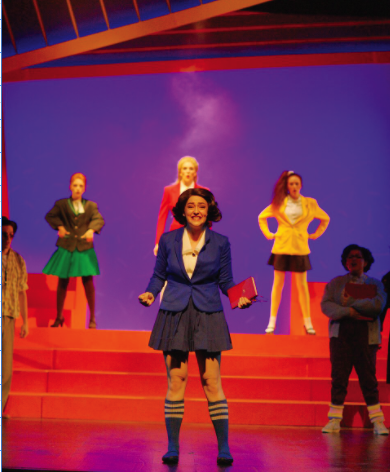 Hart House’s rendition of Heathers: The Musical is a dazzling blend of feel-good teen drama and high-octane thriller that leaves the audience reeling. While the musical lacks the movie’s cool sultriness, injecting Heathers’ edginess with a shot of Broadway adrenaline, the Hart House cast manages to lend the show tunes a raw, gritty power to complement the over-the-top musical theatre humour. For those seeking a night of pure feminine energy with a bit of murder sprinkled in, Heathers: The Musical is where you want to be.

Emma Sangalli, playing Veronica Sawyer, proves to be a powerhouse, carrying the show with her belting vibrato voice that can seemingly hit every conceivable note. Justan Myers, playing J.D., adds a much-needed dose of dangerous dreaminess, mixing suave with psychopath in a way that leaves the audience feeling vaguely worried about their attraction to the problematic character. Despite the leads’ spellbinding performances, it is Mary Bowden who steals the show as ’80s icon Heather Chandler, with her honeyed soprano voice, impossibly long legs, impeccable queen-bee smirk, and uncanny ability to cast evil in a glamourous light.

Heathers: The Musical buzzes with the thrill of femininity from the moment the Heathers strut onstage, the silhouettes of their colour-coordinated outfits dramatically cloaked in smoke. Between Heather Chandler’s cutting one-liners responsible for her reputation of “mythic bitch” — “I’m like oxygen, I’m everywhere” — and Veronica’s epic seduction of J.D. to the tune of “Dead Girl Walking” — the audience is blessed with a rare portrayal of a girl losing her virginity while remaining fiercely dominant — Heathers: The Musical will awaken your inner queen, albeit in a somewhat disturbing way. Though the show is heavy on high-intensity drama, there is also a dark humour that winds its way through the script. The audience whooped with laughter throughout songs such as “My Dead Gay Son,” a strangely upbeat ditty that culminates in an ensemble of dancers dressed like the Village People, a waving rainbow flag, and a steamy makeout scene between the play’s two biggest homophobes.

In addition to stellar singing and acting, the show’s production value is truly impressive. The live band adds a haunting beauty to the music and sound-mixing under Jonathan Corkal’s musical directing, and the choreography is effortlessly fabulous. The set is mesmerizing; a series of crisply made staircases in shades of bright purple and red frame the backdrop, a large screen that changes with the scene’s tone. There is a frenzy of wildly changing fluorescent colours when Veronica has a self-revelatory moment, and a blue screen of static with video game-esque text that reads, “Game Over,” during an especially nihilistic J.D. scene. If your mood this fall is something along the lines of, “Well, fuck me gently with a chainsaw,” Hart House’s Heathers: The Musical will be perfect for you.

Heathers: The Musical is playing at Hart House Theatre from September 21st to October 6th. Tickets are $15 for students and only $12 on Wednesday evenings.