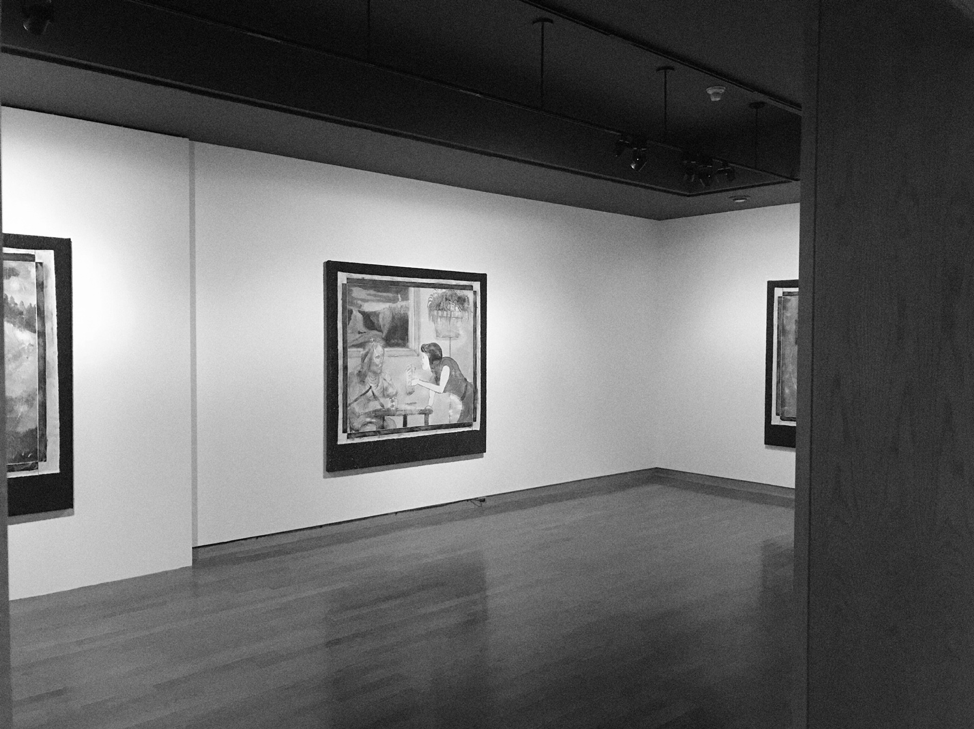 This year, the University of Toronto Art Centre (UTAC) explores decolonization and identity through boldly presented pieces that are subtle in how they deliver their messages.

The initial beauty of the University of Toronto’s (U of T) “mini AGO” was that I could simply walk in without paying or showing a card. This is a privilege that all people share on campus, the might of an entire curated art collection situated a few doors within University College. The first piece that struck me as I walked in was Maria Alvie’s Nowhere (2018), a collection of photographs scattered around the walls with planks of wood overlaying portions of the walls. I later discovered the photos were of the Amazon river, but at the moment I felt like I was on a trip of my own and these were the photographs I took. I felt small, as if I shrunk and was put onto a desk. Maria’s exploration of colonialism surprisingly lead her to create a quite calming environment.

I left the photographs with a mellow feeling as I opened the doors to the next room. I jolted with fear to my right. I was met with a spooky tribal chant coming from a dark room lit by a projected film. The man in the movie was dancing around a fire with a mask. The spooky nighttime campfire movie was Nicholas Galanin’s Unceremonial Dance Mask (2012). As a person of Tlingit/Aleut and non-Native descent, his work often revolves around exploring the relationship between the identity of traditional native people and the newer generation that change that identity. I later found out the spooky man dancing around the fire was from the ending of the movie, the beginning depicting Nicholas hammering a traditional mask into broken pieces only to reconstruct it into another mask (the same mask he uses to dance around the campfire). The mask itself is also set up inside. Its long black hair gave it an appearance of life and the featureless yet textured face made me feel spooked and reflective.

As I turned away from the spooky mask dance, UTAC’s next curated artwork hit me like a tonne of bricks. The piece had such gravity, that in retrospect I forgot to check the piece across Nicholas Galanin’s video room. The painting at the center of the room down my line of sight was far more commanding. This was Mickalene Thomas’s Origin of the Universe (2012). The painting was coupled with a prop bedroom set and the image of the painting reclaimed the spirit of femininity and mother nature’s power, while the physical bed with its duvet flung open presented a private space open to the public. I felt like I had walked into a private space but as a result was empowered by the painting’s powerful message. If you want to know what the painting looks like it helps to know that Mickalene’s piece alludes to L’Origin du mode (1866) by Gustave Courbet.

The only other piece I found notable was Joseph Tisiga’s Props for Reconciliation Series (2017). Tisiga brilliantly placed the superficiality of Archie comics in indigenous paintings that appear to have been found in old archives. With several paintings forming a collection, the faded but saturated depictions of Archie comic characters as old Canadian settlers presented a satirical ending to the gallery. The trip started with black and white impressions and colonial discourse and ended with a colourful and historical parody of Canadian settlers mashed up with modern pop culture.

The collection this year is a whirlwind of colonial discourse presented in colourful and novel ways. Many of the pieces have a lot of gravitas and aim to spark the attention towards de-colonization and social action.