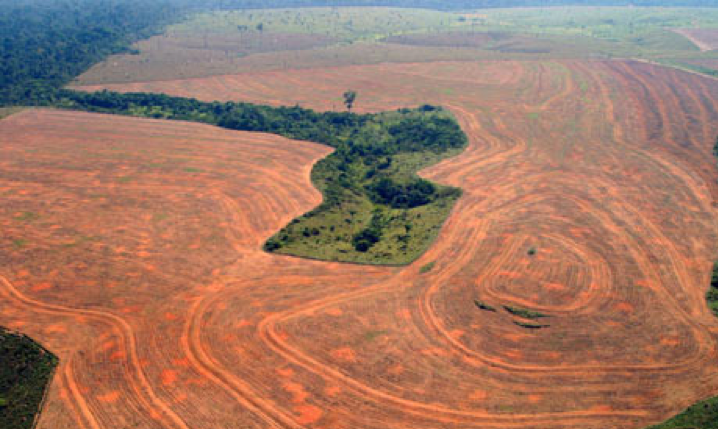 According to a new study from researchers at Chalmers University of Technology, KTH Royal Institute of Technology, both in Sweden, and the University of São Paulo, Brazil, up to 15 million hectares of the Brazilian Amazon is at risk of losing its legal protection. This is equivalent to more than four times the entire forest area of the United Kingdom.

Brazilian laws that protect the world’s largest rainforest are threatened by the country’s continuing political turmoil following the impeachment of former President Dilma Rousseff. The “ruralista” bloc in the National Congress of Brazil, which represents the interests of agribusinesses and large landholders, has been using the chaos in the political system as a cover to push through legislation to reverse longstanding protections for the rainforest, says Philip Fearnside, an ecologist with the National Institute of Amazonian Research (INPA) in Manaus.

These initiatives include a move to open portions of conservation areas in the state of Pará to mining and agricultural activities.

The government of Rousseff’s successor, Michel Temer, is also fast-tracking major development projects that will lead to further deforestation, including hydroelectric dams and highways. For example, the proposed Cuiabá-Santarém road would “cut Amazon in the middle with a lot of additional deforestation,” says Adalberto Luis Val, also at INPA.

In Brazil, there is a legislative requirement that private landowners designate a certain part of their land for the protection of native vegetation. Private landowners in states that lie in the Amazon region may use up to 20% of their land for agriculture, with the rest reserved for nature. But the law contains a paragraph which makes it possible for states to reduce this land use restriction, if more than 65% of the state’s territory is protected public land.

Following about a decade of stability, the last three years have seen rising deforestation again. Last year saw a 29% rise in Amazon deforestation over the previous year, which Fearnside in part blames on increases in the global price for soy and beef, the two main commodities grown on cleared rainforest lands.

The current administration is also playing a role. Paulo Artaxo, a climatologist at the Brazilian Academy of Sciences, says that 43% cuts in Brazil’s Ministry of Environment budget and 44% cuts in its science research budgets, which were recently finalised, will cripple efforts to combat deforestation. “The necessary enforcement [of environmental laws] in Amazonia is being reduced to virtually zero,” says Artaxo. “Even the fire prevention department will have no vehicles or funds to fight fires.”

This is a worry because Artaxo says they expect big fires this year due to dry conditions. Climate change is transforming rainfall patterns in the southern Amazon, which has experienced massive forest fires during recent dry years. These destructive trends have been somewhat offset by the notable success of indigenous peoples in Brazil in protecting their own lands. A study published last year reported that deforestation rates in reserves under tribal control in Brazil were less than one tenth of the losses seen in other forest areas.

This week, an estimated 3,000 indigenous people from Brazil’s Amazon region will join an encampment in the capital Brasília to protest funding cuts to the Brazilian government body that oversees policies relating to indigenous people, called FUNAI. They also oppose regulatory threats like the bill PEC 215, which would give Congress the power to indefinitely put off the demarcation and protection of their territories and prevent any further expansion of them. “Indigenous people across the country are outraged at the failure to safeguard their land, without which they cannot survive,” said Sarah Shenker of Survival International.

The Brazilian government under former president Rousseff pledged a “zero deforestation” policy, which was part of its commitment to the Paris Agreement to limit global warming to 2°C. While the Temer government hasn’t yet formally reneged on these pledges, it is moving in the opposite direction in the name of economic development, says Christiane Mazzetti of Greenpeace Brazil.

“There is huge potential for Brazil to achieve both its agricultural output goals and its conservation goals,” says forest ecologist Daniel Nepstad. However, he adds that this is only possible if a new spirit of pragmatic cooperation between Brazil’s farmers and the science, indigenous, and environmental communities arises in a country where — at the moment — the political polarisation is only getting worse.