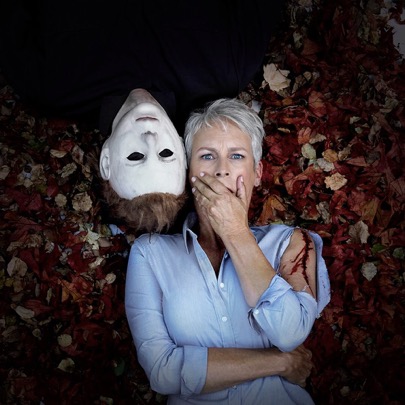 The new Halloween movie is a scream-worthy victory

A franchise that was losing steam with every sequel produced, Halloween continually struggled to find relevance in an expanding cinematic market where horror is on the rise. However, this did not stop producer Jason Blum, original Halloween director John Carpenter, and burgeoning director David Gordon Green from announcing that they have taken the monumental task of crafting a brand-new Halloween film. As the report broke, it unsurprisingly carried a heavy weight of skepticism on its back. That being said, with Green at the helm and the writing team of Green, Danny McBride and Jeff Fradley supporting him, this 2018 Halloween not only honours the ground-breaking 1978 film, but by re-visiting its roots manages to modernize the narrative, resulting in an incredibly evocative and electrifying experience.

The story of this modern Halloween picks up 40 years after the original, ignoring all of the later events and retcons of the franchise’s sequels and reboots. We see Laurie Strode (Jamie Lee Curtis) living her damaged and remote life, endlessly training and preparing for what she sees as an inevitable rematch with Michael Myers. That singular focus has cost Laurie any semblance of a normal or healthy life, including a relationship with her daughter Karen (Judy Greer) and granddaughter Allyson (Andi Matichak).

Unfortunately, her worst fears become a reality as Michael Myers manages to break out of prison following a botched prisoner transport. He makes his way back to the town of Haddonfield, where he immediately goes back to his usual routine, murdering and maiming under the cover of Halloween night. As soon as news of Michael Myers’ escape spreads, the manhunt begins – but Laurie knows there’s only one endgame, and she heads out into the night to confront the evil that once scarred her and still threatens her family.

While horror films of the past have played with the idea of the main character experiencing some type of trauma from their encounter with the film’s resident monster, Halloween opts to make it the focal point of the story. As the film’s protagonist, Laurie has clearly not recovered from her battle with Michael. She is seen as the freak of the town, closing the door on journalists looking for any kind of comment and shown suffering from PTSD. Trauma unfortunately rears its ugly head in ways that the victim cannot control and Laurie’s instability is almost heartbreaking to watch. At the same time, in light of her past trauma, she has also become the strongest version of herself – waiting, watching out for the eventual moment that Michael returns, and learning how to deal with everything without any support system. Even in darkness, Laurie remains an iconic and strong representation of female empowerment, showcasing that no matter how hard it tries, evil never prevails.

However, there is no Laurie Strode without Jamie Lee Curtis, as the actress makes her triumphant return to the franchise that kicked off her career. Our favourite “original scream queen” proves once more why she is beloved by many. Curtis is charismatic and superb in a film where she occupies most of the screen entirely on her own. The Shape himself, Michael Myers is as unrelenting as ever, drawing comparisons to his original appearance in the 1978 Halloween. Green and his co-writers aim to bring Michael back to earth and revamp the character to what it was always meant to be: a silent embodiment of evil that kills everyone in his path. There is no empathy for him or questions about how he operates. Michael is back and more vicious than ever.

The film itself is very reminiscent of Star Wars: The Force Awakens as well as X-Men: Days of Future Past in the sense that the very goal of this film is to honour the past and forge the future. Set to music that John Carpenter assisted in composing, Green beautifully brings back the unrelenting, terrifying atmosphere that John Carpenter and Debra Hill conjured up back in 1978. You are always on the edge of your seat as the film is not only as scary as the original but more graphic than ever. It is almost as if the film has a purposeful low-budget feel to give it a rawer tone.

In the end, Halloween is the sequel fans have been waiting for. Balancing fan-service and themes of the future, David Gordon Green has done what seemed to be impossible to so many: create the perfect Halloween sequel. A film that managed to remain unspoiled by its expansive trailers, Halloween rises above common horror tropes, becoming part of a new band of high-concept features such as Get Out, IT, and A Quiet Place. Not only does it relive its roots as a classic slasher, it incorporates timely themes such as feminism and PTSD. Scream bloody murder and watch this film as soon as possible.