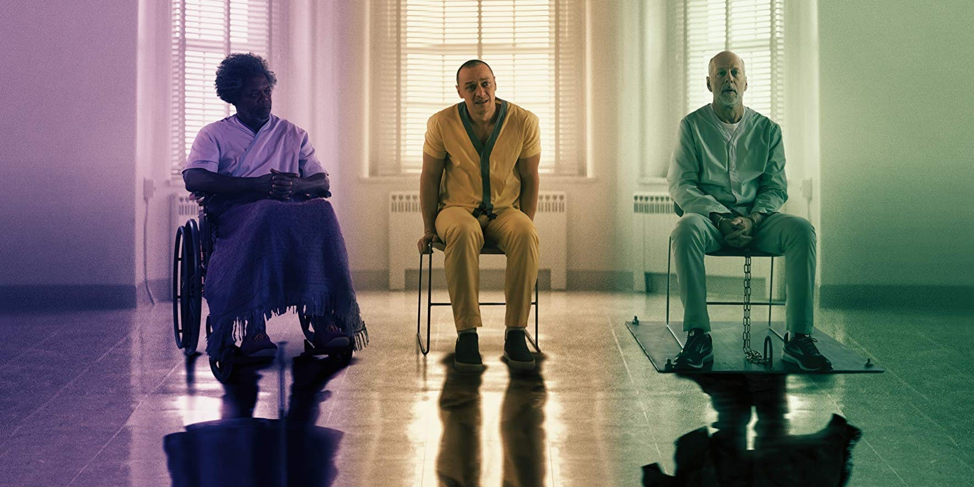 M. Night Shyamalan’s Glass is a thrilling deconstruction of the comic book industry

What began with 2000’s Unbreakable and surprisingly continued with 2016’s Split, M. Night Shyamalan’s Eastrail 177 Trilogy has finally seen its conclusion with 2019’s Glass. A trilogy no one saw coming (literally), Glass brings together Bruce Willis’ David Dunn/The Overseer, Samuel L. Jackson’s Elijah Price/Mr. Glass, and James McAvoy’s Kevin Wendell Crumb/The Horde for a team-up film unlike anything previously seen. Glass is a deconstruction of comic books before the modern age superhero boom. It is an in-depth multifaceted character study that looks to question the psychology of three gifted individuals while also putting the concept of superheroes under a microscope. With that, Glass becomes an excellently crafted feature that delivers on almost all fronts: the visuals, performances, musical score, and of course, the trademark Shyamalan twist ending.

The deconstruction that began with Unbreakable continues in Glass as Shyamalan looks to truly ground superheroes in our reality. Here, the deconstruction evolves from the simple notion of good guy vs. bad guy to the fascination of superheroes in today’s culture. Today’s Hollywood finds superhero films dominating on all fronts, whether it be the dramatic Logan, the trailblazing Black Panther, or the boundary-pushing Wonder Woman. Even outside the realm of superheroes, they have essentially taken over every other movie genre.

Glass is Shyamalan’s reaction to this boom, continuously asking why so much love and faith is put into these imaginary characters. Why is it that filmgoers place their trust in the more evolved? Glass seeks to answer this, and the overall concept may prove to be quite divisive for fans of the medium and will result in fans either loving the themes that Shyamalan builds on or rejecting his point all together.

The strongest aspect of Glass, however, lies within its main cast. James McAvoy completely steals the show as he plays close to 24 different characters within the film’s two-hour run time. With each new personality, McAvoy showcases his charismatic talent, always proving to be enthralling and engaging. Samuel L. Jackson steps back into the role of Mr. Glass seamlessly, beautifully capturing the mastermind nature of the grounded supervillain. While Bruce Willis’ David Dunn does not get as much of a fleshed out arc when compared to the other two leads, this does not take away from the performance. Willis portrays the quiet but brave hero superbly, as if he hasn’t missed a beat since Unbreakable.

All in all, Glass is a terrific finish to M. Night Shyamalan’s superhero trilogy. Where Unbreakable was an evaluation of the comic book medium and Split was the surprising origin story of a supervillain, Glass is a deconstruction of the comic book movie obsession and the billion-dollar industry it has created. It is an incredibly ambitious story that was destined to receive a mixed response. But, with Shyamalan’s terrific direction, masterful performances, and suspenseful atmosphere, Glass manages to stick the landing in a truly unexpected trilogy.