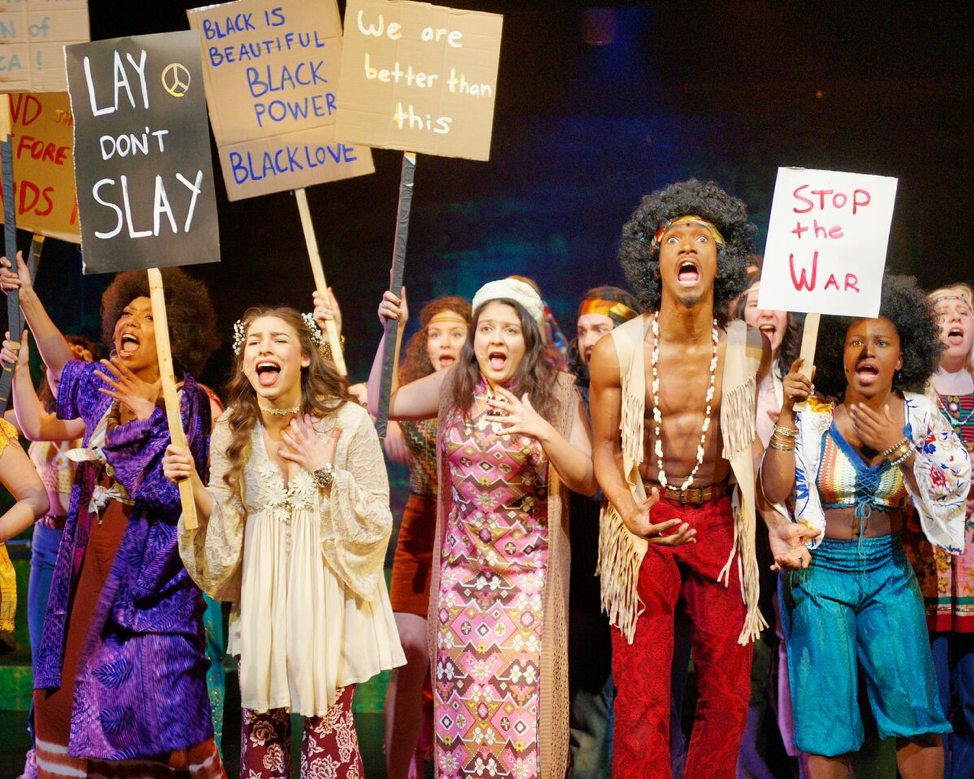 Hart House’s production of Hair is daring, delightful, and provocative

The cosmic psychedelia and absolute chillness of Hair is made even more alluring when you’re a midterm-crazed University of Toronto (U of T) student. With songs such as “Hashish” and “Sodomy,” this musical, which premiered at Hart House on January 18, paints a vibrant fantasy world of pot, free love, and fabulous clothing — seriously, bravo to costume designer Kathleen Black. Clad in floral bell-bottoms, fringed crop tops, flowy multi-coloured kimonos, and (of course) rocking their “long, beautiful hair,” the characters groove across the stage, remaining impossibly mellow amid war protests and an intricate mess of countless love triangles (and squares, and any other geometric shape you can think of). The play’s hippie vibe is all-encompassing, beginning with the set — a collage of photos evocative of the 60s — and culminating in the powerful image of the “tribe” standing hand in hand, singing joyously while completely naked. Standout performances are offered by the electric Andrew Perry (Berger) and the luminous Marisa Dashney (Sheila), both gracing the stage with their compelling gravitas and gorgeous vibratos. Hair is quasi-operatic in that it is nearly entirely music, but the lack of script was hardly noticed, given Hair’s feel-good soundtrack and impeccable choreography. The dancing burst with harmonic energy, thanks to director and choreographer Julie Tomaino, as well as to the talented dancers who brought technique, style, and fluidity to the movements.

The play, while maintaining an easy, laid-back vibe, tackled difficult topics in a poignant and nuanced way. The cutting one-liners about race, multifaceted perspectives on gender and sexuality, and ambiguity around religion make for a complex social commentary. The play’s ambivalent politics are framed by disturbing imagery, from pregnant Jeanie (Katie Miller) in a gas mask, facetiously “welcoming” toxic gases in song, to Claude (Christian Hodge)’s increasingly disturbing and vivid war fantasies. And while the play’s peace-and-love narrative is deliciously wrapped up in showtune-meets-rock tunes, the intermittent snips of dialogue expose a lot of hypocrisy — pregnant Jeanie’s drug-addled proclamation that she can put whatever she wants inside her body, for example, or a Hitler-esque principal inappropriately likening the hegemony of the school system to “World War III.” Despite this complication of the hippie discourse, the play is lit up by stellar vocal performances and frenetic energy; Hodge’s rendition of “I Got Life” is wildly fun and Perry’s “Going Down” is dynamic, both numbers buzzing with the passion and joy of youth.

Treat yourself to Hart House’s Hair: a parade of ludicrous characters, hippie-chic fashion, peaceful protest rally signs, psychedelic rock tunes, and a never-ending medley of drugs sure to hype you up for “the dawning of the age of Aquarius” — an age of social laxity that certainly seems enticing to the overworked U of T student. Pro-tip: during the show’s run, Hart House is featuring a themed cocktail, “Hippy Highball” to loosen up your inhibitions and get you in the mood to rock your locks — trust me, you’ll want it!