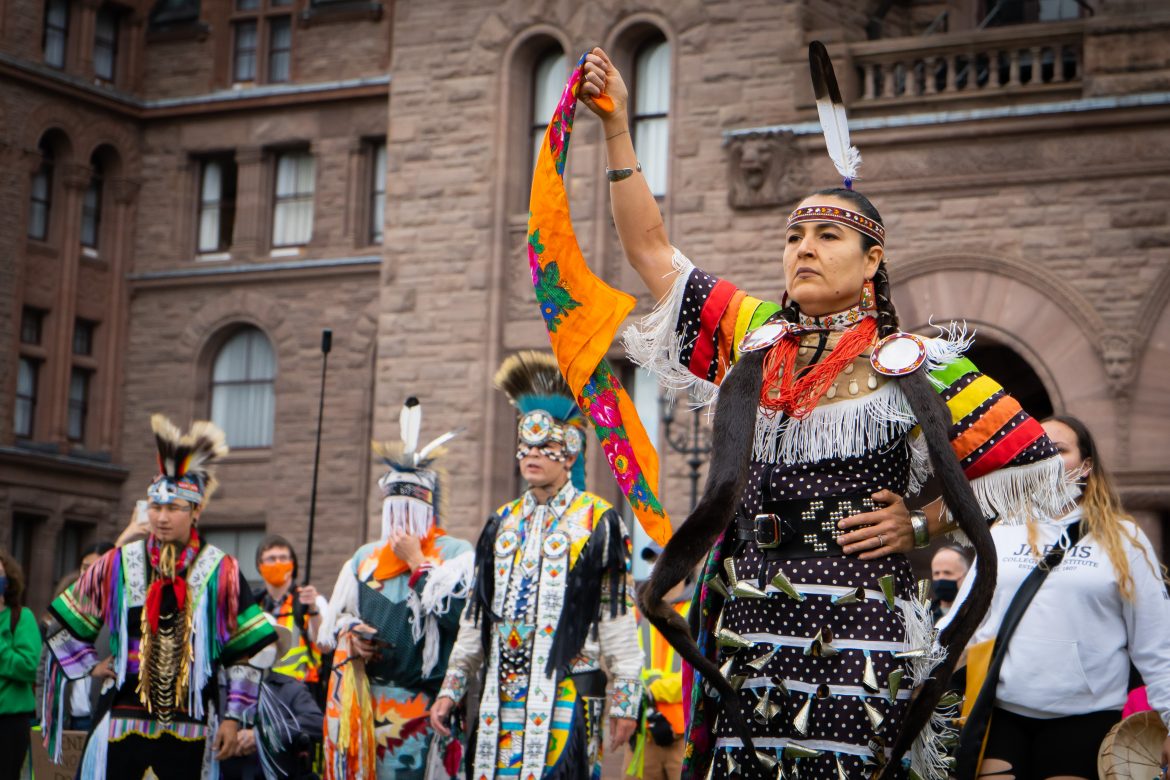 A review of Canada’s reconciliation efforts with Indigenous Peoples.

“We wish to acknowledge this land on which the University of Toronto operates. For thousands of years it has been the traditional land of the Huron-Wendat, the Seneca, and most recently, the Mississaugas of the Credit River. Today, this meeting place is still the home to many Indigenous people from across Turtle Island and we are grateful to have the opportunity to work on this land.”

We have all heard this statement already—whether at the start of a lecture, the introduction to an event, or even written in your syllabus. We understand that it honours the Indigenous communities that have occupied this land long before the University of Toronto was established. This has become common practice in many of our classes and extra-curriculars, and the same goes for many schools across the country. But the land acknowledgement is only a small fraction of what has been done to acknowledge Indigenous peoples and their territory. How much has Canada done to truly reconcile with Indigenous peoples after hundreds of years?

A significant part of Canada’s colonial history is rooted in the residential school system, which dates back to the seventeenth century and continued up until the 1990s. After Confederation in 1867 and the continued colonization of Indigenous territories, the federal government participated overtly in the expansion of the residential school system through legislation, policies, and ample funding. This was done to actively and forcefully assimilate Indigenous peoples into colonial society; they were taken from their homes, stripped of their culture and history, and subject to all forms of mistreatment including physical, mental, and sexual abuse.

Indigenous communities fought against the system since the beginning, and during the final decades of the schools’ operation, they demanded accountability and reparations from the government for the irreversible harm imposed on their people. This resulted in a series of formal apologies from the government and various churches that ran the schools, as well as the establishment of the Indian Residential Schools Settlement Agreement, followed by the Truth and Reconciliation Commission.

The Truth and Reconciliation Commission (TRC) was devoted to promoting reconciliation for residential school survivors, their families and communities, and Canada at large. The TRC ran from 2008-2015 and was given about $72 million in support from the Government of Canada. The TRC’s work includes travelling all over Canada to hear from over 6,5000 witnesses, hosting national events to educate Canadians about the residential school system and to honour the stories of former students, and curating a historical record of the residential school system. In December 2015, the TRC released the 6-volume final report of all its findings that includes 94 “calls to action” for continued reconciliation between Indigenous peoples and Canadians. Consequently, as Prime Minister Justin Trudeau accepted the TRC’s final report on behalf of Canada, he thanked survivors for opening up about their experiences and vowed to continue working towards national reconciliation in partnership with Indigenous nations and organizations.

This past summer, the Government of Canada passed legislation to mark September 30th as a federal statutory holiday called the National Day for Truth and Reconciliation, which coincides with Orange Shirt Day. The the purpose of this day is to honour the lost victims and survivors of residential schools. Orange Shirt Day comes from the story of Phyllis Webstad, a former student at a residential school, who wore a new orange shirt on her first day but it was immediately taken away from her. Orange has now become a symbol of the ways in which culture and freedom were stripped from many Indigenous children for generations. To raise awareness about Truth and Reconciliation, buildings across Canada were illuminated in orange on the night of September 30th and Canadians were encouraged to wear orange to indicate their allyship with Indigenous peoples.

Although the Government of Canada has made concerted efforts with the TRC to promote healing and accountability, the pain and grief that comes from the residential school system continues to prevail. This past summer, you may have seen photos of children’s shoes and flowers lining the stairs of old schools and church buildings. These commemorate the Indigenous children whose remains were discovered at numerous former residential schools across Canada. Indigenous communities have been leading these searches and as of September 15, more than 1,300 unmarked graves have been discovered. In response, the Government of Canada has offered $321 million to directly support survivors and fund programs and investigations for unmarked graves across the country. This has sparked intense criticism of the government for neglecting an investigation until now. It also raises the concerns of why so many deaths have been undocumented and why this continues to be the case.

We have observed some of the ways in which Indigenous acknowledgement is prevalent across the entire country, but we can also sense a strong colonial presence in our city alone. Ryerson University is named after Egerton Ryerson, who is noted as one of the architects of the residential school system. After the discovery of the unmarked graves this past summer, staff and students have been pushing even harder against the institution’s controversial affiliations. The university’s board of directors had finally voted to change the school’s name after various protests from toppling over Egerton Ryerson’s statue and only referring to the institution as “X University.” The demand for a name change is 1 of 22 recommendations proposed in a report by the Standing Strong Task Force that heavily considered the legacy of Egerton Ryerson and feedback from the community about what they wanted to change. All 22 recommendations were adopted by the university. NDP leader Jagmeet Singh and the NDP MPP for the Toronto Centre, Suze Morrison both acknowledged how crucial it is for public spaces to embody an essence of inclusivity, which cannot be achieved if it preserves the name of someone who has imposed significant harm on Indigenous communities. Rejecting Ryerson’s name also means we are able to erase his presence from the space in which the university operates, which allows for a more meaningful acknowledgement of the Indigenous owners of the land.

Ryerson University is not the only public space that has been met with demands for a name change. Anyone from Toronto will be familiar with the name Dundas, typically perceived as yet another part of our public infrastructure; a popular street that runs through the city, lined with trendy restaurants and tourist attractions. But Dundas is also the name of a controversial politician who was opposed to the abolition of the transatlantic slave trade at the end of the 18th century. The Toronto city council voted in favour of changing the name earlier this year. This is yet another example of how colonialism has become so deeply embedded into our city, as many of us have privileged the names of oppressive figures without even realizing it for so long. Our infrastructure plays a huge role in promoting inclusivity for our diverse population, especially for the sake of marginalized communities. Changing the names of our buildings and streets is only one step towards challenging the persistent colonial influence in our city, but one that is absolutely necessary.

Now the burning question that this boils down to is why it has taken so long for authorities, particularly the Government of Canada, to properly acknowledge Indigenous peoples and their land? One of the big reasons is that the government has actively participated in colonial practices for a very long time. The federal government was responsible for administering and funding these schools until the last one closed in 1996, despite the fact that Indigenous students, families and leaders had been fighting against the residential school system from the days that it first began. A lot of these acknowledgements and agreements by the government are a quick response to what people have been concerned about for years. They are abruptly acting upon a call to action amidst heated criticism. If Indigenous communities had not discovered the unmarked graves on their own or if Indigenous People and allies had not persisted for the Ryerson name change, the likelihood of any sort of address seems rather slim. In many cases, acknowledgement has only occurred because we pressured authorities into doing it.

Countless schools across Canada have made an effort to normalize the use of the land acknowledgement in their classrooms. But is that enough? How often is the statement being used? Is it being used correctly? How well do students understand the significance of it? What else can schools do to promote and bring awareness to reconciliation?

When it comes to acknowledging Indigenous Peoples in education, the current curriculum is insufficient. In many Canadian history classes, there is an overwhelming emphasis on the presence of European settlers and their motivations for imperialism and colonialism. The curriculum obscures the existence of Indigenous Peoples and treats them as something that only exists in the past. It is not enough to know that they were the first settlers and that they own the lands we now operate on. There are huge gaps in the timeline that are missing from textbooks and lesson plans, and this is something that also needs reform. Reconciliation does not have to end with just history either—incorporating Indigenous works into English classes or Visual Arts classes gives students the opportunity to appreciate, learn, and also reconcile with a culture that had been suppressed for many years in this country.

We have seen many of the ways in which Canada has tried to uplift Indigenous Peoples through apologies, establishments, celebrations, support programs, and funds. There has been a considerable effort in addressing their land, culture, and identities, and this is an important step towards healing and closure. But despite many of Canada’s efforts to reconcile with generations of Indigenous communities, there is much work to be done. Colonialism does not exist solely in our history; it is an ongoing process that needs to be sincerely and justly addressed for many years to come.