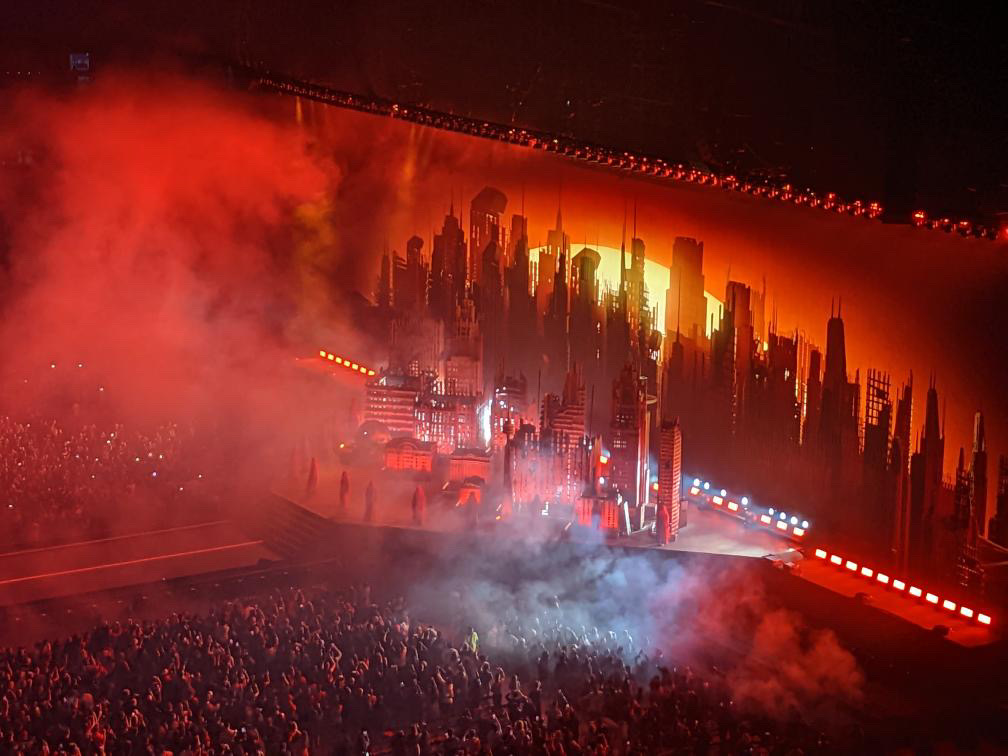 Documenting my experiences at the Weeknds’ After Hours Til Dawn Tour

Throughout the pandemic, there was one constant in our lives: music. For most of 2020 and 2021, the lead single off of The Weeknd’s fifth studio album, Blinding Lights, dominated the Billboard charts slowly becoming the longest charted song on the Hot 100 when it hit its 88th week. For such an influential artist coming home to Toronto for a concert, it seemed like a no-brainer to pick up tickets. This was before the tickets were being sold for a show that also featured Doja Cat during the summer that was postponed due to the infamous Rogers debacle. The Weeknd added an additional show the day after the original rescheduled date, so there I was at the Rogers Centre on a Friday night. Experiencing The Weeknd on the weekend.

This was my first time at a Rogers Centre concert and I must say, the sound might be the best I have experienced in a stadium. Many artists frequently default to Scotiabank Arena (formerly known as the Air Canada Centre) but the problem I find is that for many Hip-Hop performances, the sound just becomes constant bass patterns that swallow the vocals and anything else. The seats I had were also amazing for the price. Being in the 500 levels of the stadium offered a view of the entire stage and being situated on the sides rather than directly facing the stage made it so I did not have the obstruction of a large moon, that was part of the show, blocking my view. The stage was also designed for specifically the Toronto shows as The Weeknd performed in front of a recreated Toronto skyline that would periodically shoot fire out of the top of its skyscrapers.

Prior to The Weeknd taking the stage, Mike Dean and Kaytranada performed DJ sets. Now I don’t believe this was a particularly good choice for a Weeknd show as many fans are generally pop-music oriented when anticipating The Weeknd and DJ sets are usually seen within clubs. I enjoyed it though as I have a long history of listening to Mike Dean’s work as he is a frequent collaborator with Kanye West, my favourite artist. Watching Mike create beats live while fiddling with a keyboard and a voice modulator was a unique experience. Many younger people around me had no idea who he was, unfortunately referring to Mike Dean as the “funky middle-aged man”. Kaytranada was also a fun experience as he is a great producer, however as I have already stated, back-to-back DJ sets are not very structurally appealing.

One of the best things about this concert is its production value. Since The Weeknd was coming off a Super Bowl performance in 2021, he has a lot of pyrotechnic tricks up his sleeve and all of that was on full display throughout his set. There were fire, intricate light shows, and even light-up bracelets that were handed out to attendants before the show. It felt very much like the Super Bowl show was brought on tour which is a massive accomplishment. To highlight a few songs within the setlist: The Weeknd dedicated the track Die for You to the city of Toronto which added a personal layer to the lyrics. Fan favourites such as Can’t Feel My Face and The Hills also generated a lot of crowd engagement. The setlist topped out at 29 tracks and is easily one of the most comprehensive setlists I have ever seen, especially considering how diverse and accomplished his discography is in general. The After Hours til Dawn tour was one of the best concerts I have been to and it was an excellent reintroduction into concert going post-Covid.