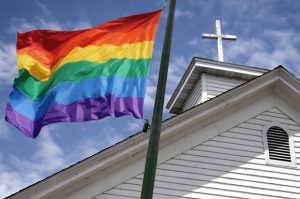 Disclaimer: The author is a cis woman and will be speaking to her own personal beliefs and experiences as a member of the LGBTQ+ and Christian communities. She will not be speaking on Christianity’s relationship with transgender and gender-nonconforming people of faith in this article in particular. For further reading on this topic in particular, please see: Beyond a Binary God: A Theology for Trans* Allies by Tara K. Soughers, and Transforming: The Bible and the Lives of Transgender Christians by Austen Hartke (also if you go onto austinhartke.com, you will find additional affirming resources; including books, videos, podcasts, and more) to learn more.

Over the past few weeks, I’ve had friends reach out to ask about my thoughts on Pope Francis advocating for legalized civil unions. As a queer Christian, when the news hit my Twitter feed, my gut reaction was to do a little Snoopy-happy-dance. After reading into it, I just started feeling frustrated and exhausted. It holds significance, but is it enough?

LGBTQ+ Christians are often expected to grovel at the breadcrumbs of tolerance tossed at us by our non-affirming brothers and sisters in Christ. Regardless of how the Holy Father may appear to the world, the statement he made was just another cruel reminder to myself, as well as countless of LGBTQ+ people that grew up in the Church, that we are not invited to participate in the Holy Sacrament of Marriage, and that sucks.

If non-affirming Christians truly believe that they are being fair and loving towards their LGBTQ+ friends and family members, then why is there still tension? Why are slurs tossed around without a second thought?

What we know about sexuality today is new information in terms of world history. It was not until the 19th century when Hungarian journalist Karl Maria Kertbeny coined the terms heterosexual and homosexual. Prior to this, the concept that each of us had our own types of attraction was nonexistent.

Where do the slurs begin? We need to look no further than the Bible itself. While the story of Sodom from the Book of Genesis is not about LGBTQ+ people, it is a story which has gained quite a bit of traction in the anti-gay rhetoric. So, let us begin there.

For Sodom, it is a bit of a tragic story. As you may recall, when the Angels visited Lot the men in the town surrounded Lot’s house asking: “Where are the men who came to you tonight? Bring them out to us, so that we may know them,” (Genesis 19:5, NRSV). In other translations of the Bible, the word ‘know’ is swapped out with ‘have sex with’ and ‘have intercourse with’.

We know that the men of Sodom wished to have sex with the Angels (although it’s important to note that they probably didn’t realize that they were Angels instead of humans), and that this was a demand, rather than an invitation. What these men attempted to do was not an act of love; it was an attempted act of dominance and gang rape. Gang rape is not synonymous in any way with the love that same-sex couples have for each other, and quite frankly, it is insulting to suggest that.

Matthew Vines mentions in his book, God and the Gay Christian, that “In the ancient world, for a man to be raped was considered the ultimate degradation… Aggression and dominance were the motives in these situations, not sexual attraction.”

This lines up with other texts in the Old Testament which speaks of Sodom as an arrogant and inhospitable city (Ezekial 16:49-50, Sirach 16:8 and 3 Maccabees 2:5, for example).

While many theologians and scholars have dismissed the idea that the sin of Sodom was same-sex attraction, the damage has already been done. The word ‘sodomy’ is still used as a slur to describe non-procreative sex. Ironically, the fall of Sodom created an air of inhospitality towards LGBTQ+ people.

Unfortunately, the story of Sodom is not the only instance where Christianity has wrongly made same-sex relations and sexual violence synonymous. Though there are other biblical misinterpretations, let us jump way ahead to Europe during the Middle Ages.

Catholic laws and theology left out same-sex acts for over 1,000 years. There were things like St. John Chrysostom suggesting that men who participated in same-sex acts were worthy to be stoned, and women participating in same-sex acts were unnatural and diseased, but nothing in doctrine. Then came 1179 when the Third Lateran Council outlawed sodomy. Clerics were defrocked or had to serve penance in a monastery and lay people were excommunicated. After 1250, both the secular state and the Church started defining gay actions as “crimes against nature.”

In the Catechism of the Catholic Church, section 2358 states: “The number of men and women who have deep-seated homosexual tendencies is not negligible.”

Language is important. Let’s look at the phrase homosexual tendencies. Here, the Catholic Church admits that it does not recognize sexual orientation, but rather tendencies. The two are real things, but are not interchangeable terms.

With phrases Catholic doctrine calling same-sex acts “morally disordered,” “intrinsically evil,” and “grave depravity,” it’s no wonder as to why LGBTQ+ Catholics and Christians alike can feel forsaken and disoriented. We are taught very young that the desires we possess are evil.

If we are unable to pursue the Sacrament of Marriage, then would that bring us to holy orders? In short, no.

Back in 2005, the Vatican released a document on discerning vocations. Here it states: “The Church, while profoundly respecting the [persons with homosexual tendencies], cannot admit to the seminary or to holy orders those who practice homosexuality, present deep-seated homosexual tendencies or support the so-called ‘gay culture.’”

There are a number of issues with this statement, but the first and foremost is this idea that gay men ‘practice homosexuality.’ It’s a part of who they are. One’s sexuality is not just about having sex; attraction is in the mix as well. For there not to be such a divide, there needs to be an understanding of sexual orientation. If we do not hold the same definitions, or simply speak within the same vernacular, then we will butt heads with each other constantly.

Another major problem with this, is that a person cannot be admitted to the seminary of holy orders if they “support the so-called ‘gay culture.’” What does that even mean? That we are not allowed to support the livelihood of the LGBTQ+ community as a whole? Heavy statements such as these which go no further into explaining its reasoning are at risk for being grossly misinterpreted.

To summarize: we can’t marry, we can’t be admitted to holy orders, so then what are we left with? “To live as single persons in the world,” as the Prayer of Vocations suggests? While celibacy is a beautiful thing, even Pope Saint John Paul II in his most famous work, Theology of the Body, states that celibacy cannot be forced upon. Yet, it seems like our only option if we want to live a life serving Christ.

Matthew Vines also touches on this subject in his book, saying that “for gay Christians, mandatory celibacy affirms something [different from straight Christians]: the sinfulness of every possible expression of their sexuality.” Even though we all have a cross to bear, this is something that is unfortunately more than most cannot bear. Whether it’s intentional or not, this idea forces us to be at war with ourselves and has the potential for self-loathing.

Now, do not get me wrong, Pope Francis saying that civil unions should be protected by law, is a fantastic step in the right direction. This is the first time any Pope has stated this. While I don’t believe it goes far enough given the trauma that believers from various Christian denominations go through, I do believe that if we properly listened to one another, and found our own Esperanto then we could create a welcoming, affirming Church which celebrates both our mutual love for Christ, as well as our differences.