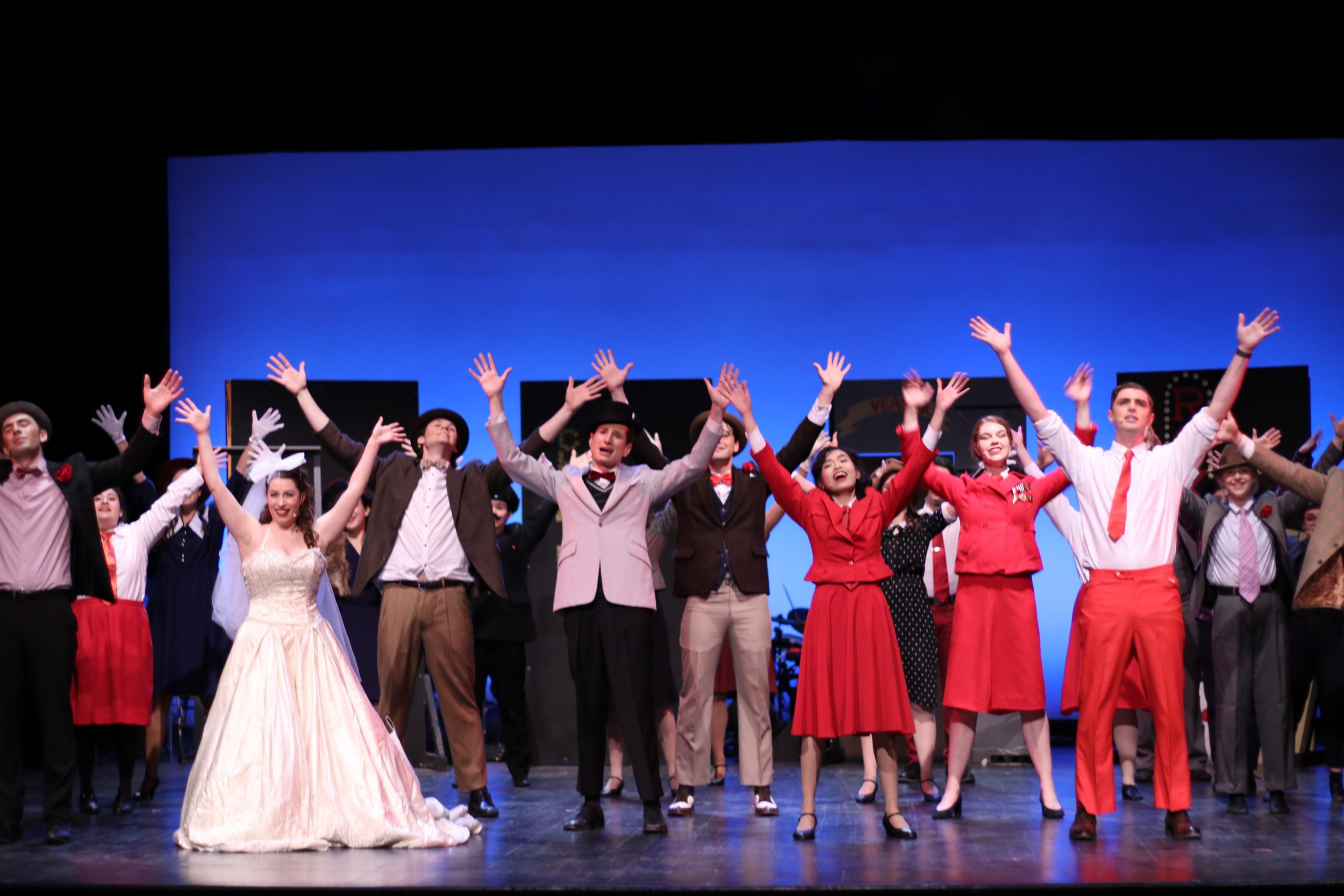 A review of the SMC Troubadour’s latest

The 1955 film version of the classic musical Guys and Dolls holds a special place in my heart. Its cast is packed with impressive talents and highly recognizable names like Marlon Brando and Frank Sinatra, who execute the songs in an old-timey Hollywood spirit. Consequently, the musical numbers are earworms, more than happy to live in your head for a few days. Guys and Dolls represents everything I like about the genre of musicals: eccentric characters all tied to an integral setting, who face different stakes that coincidentally bring them all together in a quirky fashion for the plot’s climax. Additionally, the film boasts unexpectedly hilarious romantic storylines and moments of choreographic brilliance. I was naturally thrilled when I found out that the SMC Troubadours were putting on Guys and Dolls at Hart House Theatre in February and, after seeing the production, I have only positive things to say. The SMC Troubadours managed to stay loyal to the film’s best moments while adding a charismatic, comedic spirit to the characters. The costumes and choreography also deserve high praise for being innovative in style, yet classic and traditional.

The production impressed me before it even began. As I sat in my seat, waiting for the show to start, I discovered that an orchestra would be accompanying the actors in their musical numbers. This always elevates the overall performance and quality of a musical in my opinion, so my expectations were set high and, to my delight, I was not disappointed. The curtains opened, and the cast members began hurriedly walking across the stage, set in New York just like in the movie. A highlight of Guys and Dolls comes from the performances by the lead actors. Ronan Mallovy as Sky Masterson was very loyal to Brando’s interpretation in the film: confident, slick, and witty but also soft and loyal, revealed in his romance with the character of Sarah Brown, portrayed by Kara Austria. Mollovy and Austria’s chemistry was evident, especially in the musical number “I’ll Know,” where Austria’s high vocal range captivated the audience. Gianni Sallese as Nathan Detroit, the mastermind of the travelling craps game in New York City, was a strong cast member due to his evident comedic intuition. Sallese’s Detroit was quite different from Sinatra’s in the film. Yet, I preferred his over Sinatra’s, as this Nathan seemed truer to his character’s dilemma in the plot. As a result, Sallese’s Nathan was goofier and more nervous, but nevertheless a wise guy who’s slick enough to continually run an unauthorized craps game that is constantly moving locations to avoid the police. Sallese easily racked up the most laughs from the audience. He also had great chemistry with his character’s romantic interest, Miss Adelaide, portrayed by Emily Villani, who had fantastic vocals (especially in “Adelaide’s Lament”) and comedic timing with her exaggerated New York accent. Brendan Rush as Benny Southstreet and Leo Morgenstern as Nicely-Nicely Johnson both deserve an honourable mention. They were a captivating duo from the play’s opening song, “Fugue for Tinhorns,” all the way through to the end. The duo was especially strong in their execution of “Guys and Dolls,” where they truly embodied the show’s overall old-timey sentiment. Morgenstern’s performance of “Sit Down You’re Rocking the Boat!” was also a highlight.

Supporting actors, such as Big Jule, portrayed by Elizabeth So, and Harry the Horse, portrayed by Colin Darling, had a comedic, captivating stage presence in their interactions with the main characters Nathan Detroit, Benny Southstreet, and Nicely-Nicely. The talent of the choreographer, Emma Lavin, was strong throughout all musical numbers, but was showcased the most in larger group numbers including “Take Back Your Mink,” “Dance Sequence – A Woman in Love,” and especially “Luck Be A Lady – The Crap Game Dance.” The performers were synchronized and clearly well-rehearsed, which allowed their talents, and therefore the choreographer’s, to shine through. The latter dance sequence featured almost the entire cast, which was very entertaining to watch. Before seeing this production, I was not well aware of the SMC Troubadours. I have since learned that this is the student drama society of St. Michael’s College, and the productions are essentially all student-run. Knowing this, I am even more impressed with the quality of the show. Everyone in the cast — the actors and behind-the-scenes members — came through with a fantastic performance of professional quality. Congratulations to the cast members and the director, Nour Ramzi, for a wonderful production of Guys and Dolls!