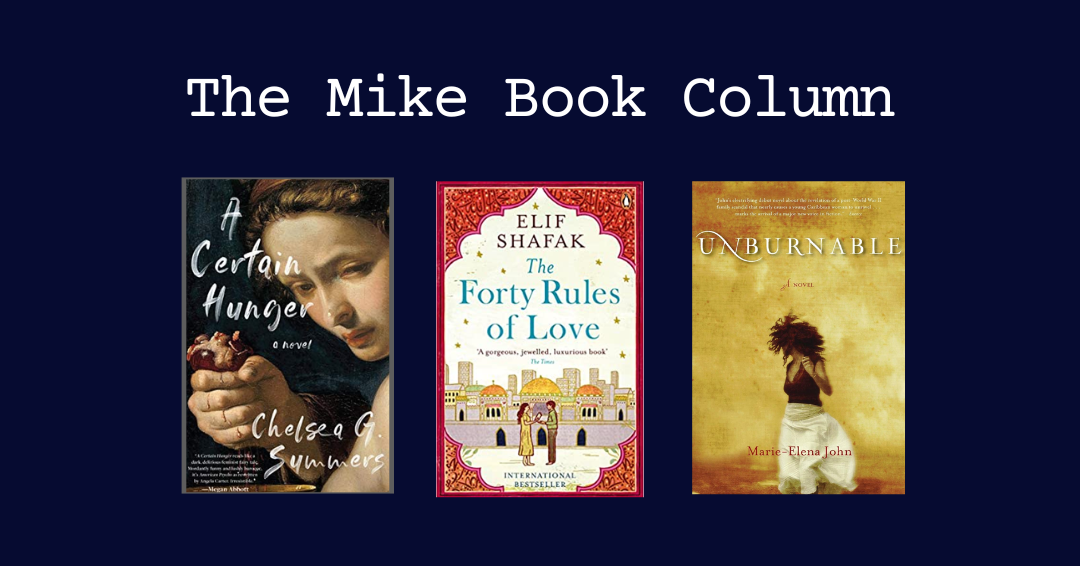 A Certain Hunger is a book that I liked enough to buy a personal copy of it after having borrowed it previously from the public library. The novel follows Dorothy Daniels  — food critic, cannibal, and convicted serial killer — as she recounts her murders from prison. Summers engages with the gore and brutality by constructing it as a satire of “foodie culture.” As much as you are disgusted by the visceral description of Dorothy’s actions, you are also enraptured by Summers’ ability to balance it against Dorothy’s biting humor and wit.

In this psychological thriller, Summers handles the femme-fatale trope by dissecting it (like how Dorothy dissects her victims). Dorothy’s self-awareness allows her to critique the uniqueness of her own position — a female serial killer is somewhat of an anomaly, both in fiction and in real life, but why is that?
If you like gore, satire, evil women, delicious food, or an over-romanticized Italian countryside, then A Certain Hunger is the novel for you. But be warned: you will like this cannibal serial killer more than you expect to. Also, be prepared to engage with your own biases about women in relation to morality and confront how much you really think you know about food. Bon appetit!

The Forty Rules of Love – by Elif Shafak

The Forty Rules of Love takes the idea of spirituality and love, two enormous ideas, and creates a story worth reading.

Shafak uses two narrative stories in this book to show the power of love and the road to spirituality through two different timelines. The main storyline is from the perspective of Ella Rubenstein, a 40-year-old married woman with 3 kids living a normal life in present-day Massachusetts, USA. Ella is unhappy in her dull marriage, and is yet to experience what love is. She comes across a novel that she has to read for her work called Sweet Blasphemy, unbeknownst to its meaning in her life. This text is the second storyline within this novel, and it entails the story of Rumi and Shams of Tabriz’s journey of love and spirituality. Shafak’s clever way to show the impact of literature is the reason why this novel does so well to inform and narrate a story (two in this case).

Ella reads this novel and gets lost in 13th-century Baghdad where we see Shams’ journey of finding a spiritual companion and imparting his own knowledge of love to fellow Sufis. The forty rules of love are given by Shams throughout the novel in order to attain complete spiritual enlightenment. Ella, while reading the novel, contacts the author known as Aziz Zahara and ends up falling for him.

Using the backdrop of Shams and Rumi’s journey to attain the knowledge of love and true spirituality, Shafak tells the tale of a normal housewife looking for true love.

This novel, in many ways, takes the ordinary and majestic through a tumultuous ride full of lessons, heartbreak, guidance, and the true essence of love and spirituality.

Unburnable tells the story of three generations of women. Lillian is the daughter of Iris, and Iris is the daughter of Matilda. Matilda practiced Obeah and was hanged for multiple murders. But did she really commit such heinous crimes? This is what Lillian needs to find out when she returns to their home country of Dominica. Haunted by the stories of her mother and her grandmother, Lillian is searching for peace. But the rich history of the island will not give it to her so easily.

As a child living on a small island, Lillian could not escape the whispers about her family, and she was eventually sent to America where a lot of her narrative takes place. Teddy, her American friend and lover,  also becomes invested in the mystery. The American narrative is distinguished by Lillian’s and Teddy’s academic studies, which are a stark contrast to the magical realism in the Dominica narratives of Iris and Matilda. Dominica is a vibrant setting, and the novel is particularly successful in its distinctive exploration of the Masquerade tradition. The setting also makes the secrets that the islanders keep all the more alluring — is there anyone left who knows what really happened? Or, will Lillian need to be satisfied by the island’s taunting songs and stories that may never reveal the whole truth?

Despite spending little time with each other, the stories of the three women are deeply intertwined. The structure of the novel alternates between the narratives in a way that keeps the plot moving nicely but also can stop abruptly. Often, a chapter will end with a huge revelation, and the reader has to accept it — it does not seem fair to the reader, but neither are these narratives that the reader is indulging in. This is a book for someone who wants a long, difficult, and jarring read. It is also a book for someone who wants a rich, powerful, and freeing read. It is an excellent postcolonial novel that serves to remind its readers that history is unburnable.