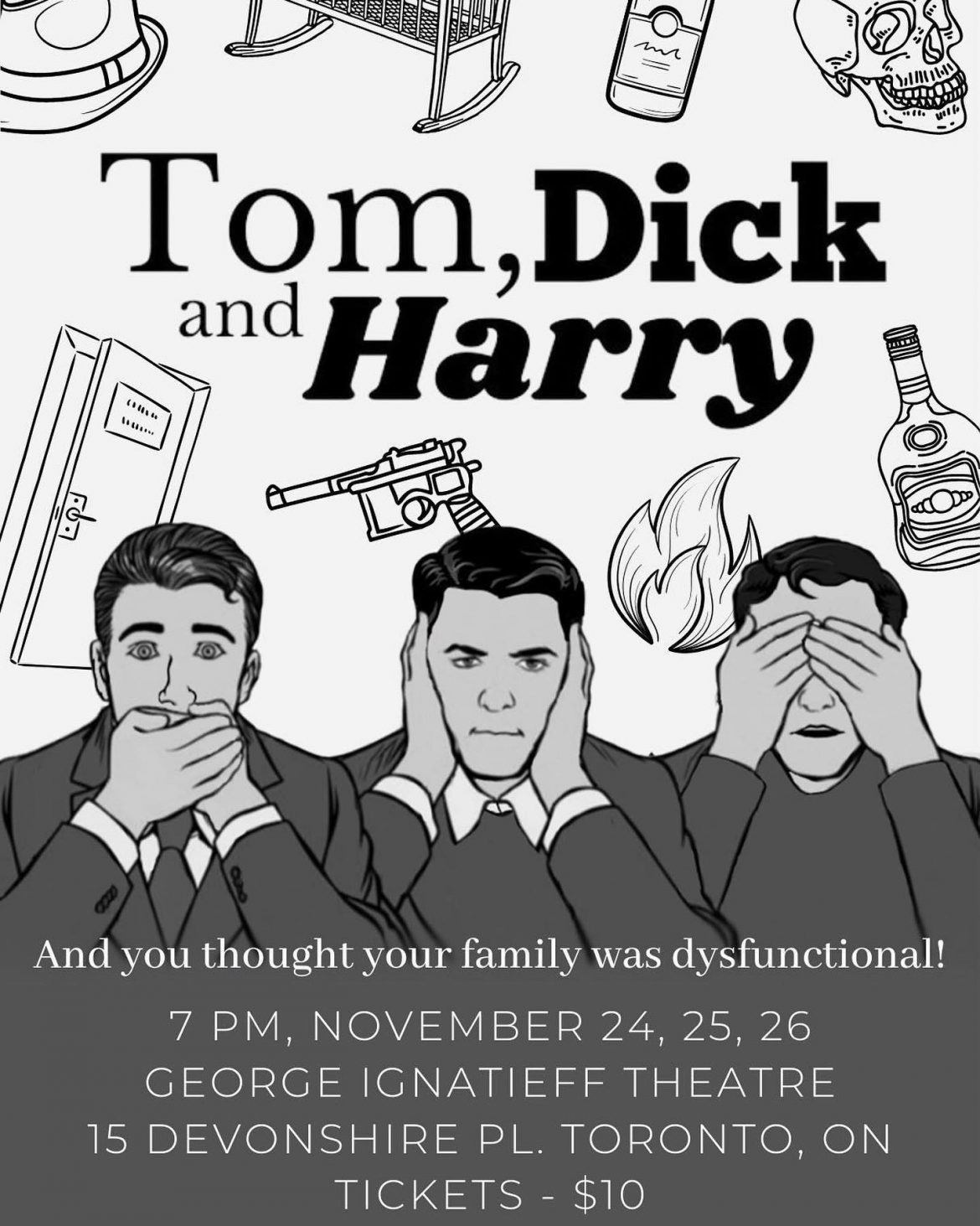 The crowd was roaring with laughter, and I was rolling on the floor

When I first entered the dressing room backstage in order to meet the cast and gather my thoughts for this review, I was met with several wrapped, severed corporeal extremities laying on the floor, and a tall man in a British constable’s uniform telling me “Ello.”

It pleases me to tell you that the above will not be the weirdest sentence in this review.

Tom, Dick and Harry is a farcical play written by father-son duo, Ray and Michael Cooney. It was first written and performed in England near the turn of the millennium. The piece follows Tom Kerwood, a well-mannered Londoner, and his troublesome brothers, Dick, and Harry. As the play opens, Tom and his wife are looking to adopt a child and buy a home, but due to a few insane antics on the part of Dick and Harry — which involve the desecration of a corpse, the trafficking of cigarettes and illegal refugees, and the larceny of a cadaver — Tom is left to save face in front of his wife, a nosy constable, and a stuck-up adoption agent who is scheduled to arrive and canvas the Kerwood household. Ray Cooney has been nominated for multiple Tony and Oliver awards throughout his career.

With the help of the Trinity College Dramatic Society (TCDS), Tom Dick and Harry brings some much-needed fun to the University of Toronto stage.

I spoke to director Luis Sánchez and stage manager Anneka Lee about putting the show together. I wanted to know about any changes in the creative direction of the play. Because of the nature of a licensed production, a director cannot make any changes to the script. Sánchez discusses this limitation, especially considering that there are parts of the play that may now be seen as outdated due to its age.

“Now, if actors choose to ad-lib on the spot,” Sánchez jokes about the addition of certain expletives on the part of his trusted actors. In the case of distasteful jokes, Sánchez ‎ remarks, “if they ‘forget’ their lines, as a director, there’s not much I can do about it.” Lee and Sánchez ‎ also discussed the handling of the deeper themes of the play entrenched within the comedy. “At the end of the day, it’s a family drama, it’s about familial relationships… Everybody’s trying to build themselves up from the ground, which is really funny in a lot of ways, but also really heartfelt and powerful,” says Lee.

When asked about his favourite directorial decision, Sánchez talks about the set design inspired by “every sitcom house ever,” sitcoms, and screwball comedy — citing the latter two as massive inspirations for his taste in humour.

Spencer Pearson shines brightly in the role of the charmingly anxious Tom. There is not a single scene in the play where he does not snatch the spotlight — and since there is not a single scene in the production in which Tom does not feature, it would be safe to say that the entire production was pilfered by its star. In speaking with The Mike about his first play since high school, Pearson talked about why he especially enjoys comedies. “When you’re on stage and everybody laughs, it just gives me like a big ego boost. Like every time I’m like, “Yes! Everybody thinks I’m funny!”” He goes on to contrast acting in a more dramatic production, as opposed to one where severed body parts hidden under sofa cushions are more hilarious than horrific, “you can’t hear people cry, but you can hear people laugh. So, you get an instant dopamine rush!”

In watching the play, everyone shares that dopamine. Owen Hill and Nina Katz handled their roles as Dick and Harry Kerwood with a casual joviality which took the sibling dynamic printed on the script, and petrified it on the stage. Katz’s solemn soliloquy showcased her talent in believing what she’s saying and Hill, in particular, brought waves of confidence in his gestures and physicality while embodying the role of the trafficking trucker.

St. Michael’s own Kaiya Nixon, who’s only credential to be appearing in the play at all is her British naissance, adopts the role of the snobby adoption agent with unnatural prowess. “It’s almost like I’m becoming Mrs. Potter… in my day-to-day we’ve morphed into one,” Ms. Nixon tells The Mike. Her performance was appropriately arrogant, and at times, I found myself concerned that the terror she exhibited toward the happenings on stage might have been genuine.

The TCDS put on a fantastic farce with a fabulous cast and crew, and their success was evident through the echoes of giggling show-goers whose laughter haunted the George Ignatieff Theatre during the last few days of November.