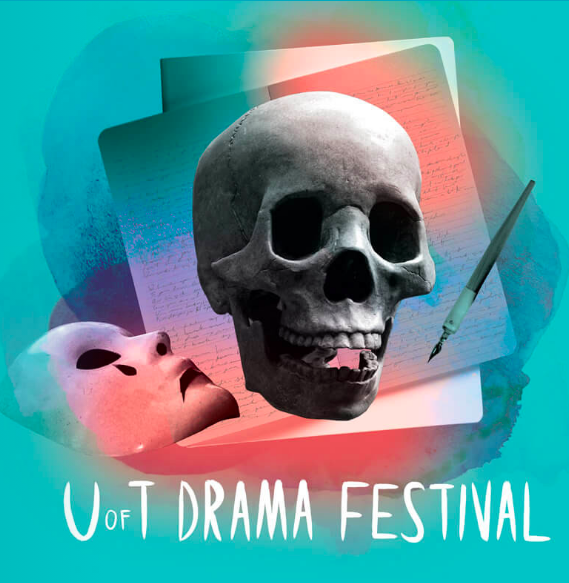 A dramatic exploration of the Holocaust’s primary sources. The existential crisis of one Canadian literary luminary in a liminal McDonald’s. The lavish mise-en-scène of a traditional English ballad. These were the three one-act plays performed at the University of Toronto (U of T) Drama Festival on the evening of Friday, February 7, 2020. As noted by adjudicator Aaron Jan in an efficient volley of public comments following the performances, all three plays were ghost stories. They were also adaptations of an existing literary corpus, to one extent or another.

A mildly worrying piano refrain ushered the medium-size audience into the first play of the night: UTSC Drama Club’s I Never Saw Another Butterfly. The play’s content is pulled from the primary historical evidence left by the inhabitants of Terezin, a garrison town, ghetto, and temporary home of Czech Jewish prisoners en route to Auschwitz. The characters are mostly children, as well as one teacher, who struggle with the meaning of their experiences and grapple for a sense of joy. Joanna de Villa was arresting in her depiction of Raja Englanderova, a very real survivor of the Holocaust whose historical words serve as the basis for I Never Saw Another Butterfly. De Villa did especially good work opposite her co-star Sam Nanda, who won an Acting Award of Merit at the conclusion of the festival.

The UC Follies, for their part, provided a very literal title: Northrop Frye Has an Existential Crisis in McDonalds. While Aaron Jan suggested that the entire play was an extended in-joke, the Follies directly confronted Northrop Frye’s status as a dead white male, very memorialized literary scholar whose books have retained a limited readership. Northrop Frye remains known, but he is no longer understood. Isobel McDonald delivered a towering comedic performance as Frye’s lingering spirit, trapped as he is by anxieties that have survived his mortal career. Stage manager Helen Ho used minimal props and furniture to convey a purgatorial McDonald’s, the perfect site of degraded capitalism in which Frye and two other deceased academics can bicker about how to navigate their legacies. Every ghost story requires a thesis statement about death, and writer Katherine Burke found a singularly articulate one amid the hilarity of depressed ghost-scholars: “Maybe I didn’t need some greater purpose. Maybe I just needed to know that the struggle toward one would continue on without me.” The audience at the Drama Festival was commissioned by this final line to continue wrestling with the big questions.

The Troubadours of St. Michael’s College took another tack by dramatizing “Fair Margaret and Sweet William,” a traditional English ballad. The Troubadours’ play, Lady Margaret, retells the story of young Margaret (Hannah Spracklin), whose engagement with secret lover William (Isaac Pilozo) is discovered by her male relatives. Margaret is locked in her father’s attic, from which she fatally escapes by falling out the window, leaning out too far to glimpse William’s wedding with his new bride. After William retires to his nuptial bed, a white-clad figure emerges from the darkness and knocks on his window… Lady Margaret veers unexpectedly from moments of unbearable tension to tableaux of tenderness. The audience reacted appropriately to both modes, gasping and exclaiming audibly.

The audience’s receptivity was a promising sign of the Troubadours’ commitment to atmosphere, especially given that scene transitions were somewhat inelegant. Emelia Findlay and the rest of the Troubadours’ tech team created the most ambitious set of the evening, building several free-standing wooden structures from scratch. Findlay won the IATSE Local 58 Award for Technical Achievement, but the future success of Lady Margaret will require smoother and quicker movement of the impressively massive set pieces. Director Isabella Cesari feels that the production of Lady Margaret, which she initially intended to adapt as a screenplay, was a positive experience. “I think the gothic and horror genres are underrated and full of so much potential for the stage, so I wanted to adapt a ghost story,” Cesari said in a statement for The Mike. Evidently, the other artists of U of T agree with Cesari, given the dominance of ghost stories at this year’s Drama Festival.