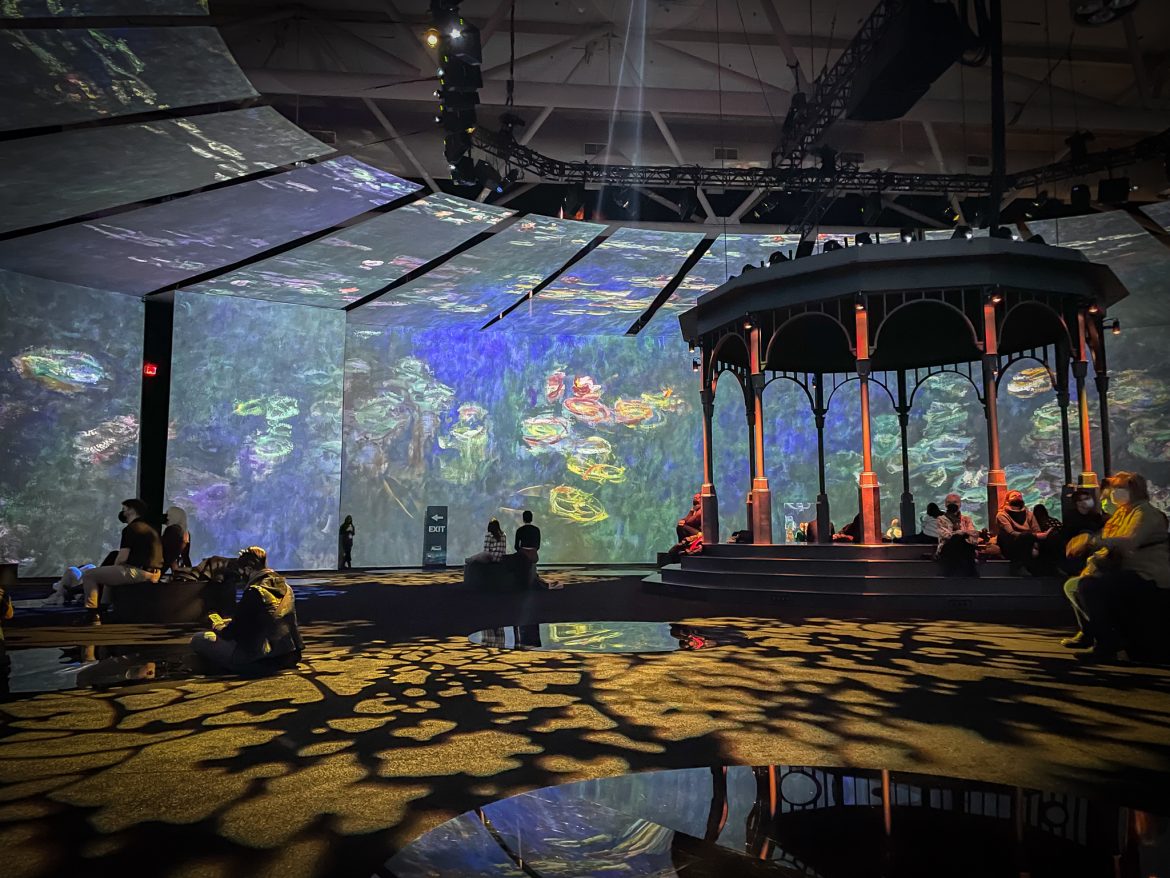 Bringing classic artwork to a new immersive format, the Beyond Monet exhibit in Toronto features beautiful projections of Claude Monet’s work. The exhibition’s website describes it as a “spectacular audio-visual journey” that contains over 400 of Monet’s pieces and occupies an area of more than 50,000 square feet. The exhibit consists of two large rooms. In the first, there are several transparent tapestries hung around the room as well as panels containing information about the painter’s life and work. The second room is the projection room which uses over 4 trillion pixels to display moving images of the painter’s artwork on the floor and walls of the exhibit.

During reading week, I had the chance to visit the exhibit and see what it was all about. This was my first foray into Monet’s work, so I was very curious to learn about him and the Impressionism art movement. The first room of the exhibit was helpful for this as there were several informative panels which gave a detailed biography of Monet’s life. The room also had a large bridge that viewers could walk across. The bridge appeared to be the same one Monet depicts in his series of paintings, Water Lilies. I felt that the exhibit did a fantastic job of bringing this scene to life, using mirrors to mimic water and lighting to embody the mood of the paintings. This room also described Monet’s struggle with cataracts and how he developed partial colour blindness later on in life, which I found to be very interesting.

The second room of the exhibit was perhaps the more interesting of the two. While the moving projections are obviously a very different format than the original static paintings, they did a wonderful job of bringing the artwork to life. The projections added mobile components like trains and ships which quickly moved from one side of the room to the other across the wall. Trees and flowers were shown dancing in the wind and water took on very lifelike currents. Every so often, a quote by Monet would be shown on the wall tying the various projections and paintings together to tell a story. Overall, I feel that this part of the exhibit was a successful attempt at animating Monet’s artwork and bringing it to life.

While visiting the exhibit and exploring Monet’s work for the first time, I noticed several themes and motifs in the paintings presented. I found the use of water to be very interesting. Since I like nautical elements and themes in art, I immediately noticed various scenes including ships and boats which appeared to resemble the one in Monet’s Ships in Harbor (c. 1873). These scenes used much darker shades and hues of blue than those seen in the Water Lilies series which created an interesting contrast and juxtaposition. Another interesting element that I noticed in the exhibit was the motif of flowers; one painting in particular that caught my eye was Poppy Field (c.1873) which features rolling hills covered in poppies akin to the iconic California Poppy Fields. At one point, Monet’s quote, “I perhaps owe having become a painter to flowers,” danced across these images which I felt was a nice touch.

Overall, the exhibit was well designed and was a good snapshot into Monet’s life and his artwork. As someone unfamiliar with the Impressionist movement, I learned a lot about this style of art and what it embodies. While the high price tag of $45 for student admission is somewhat deterring, I genuinely enjoyed the exhibit and would recommend visiting it if it fits within your budget. As a nice bonus, it is also a great place to take some aesthetic photos for Instagram.