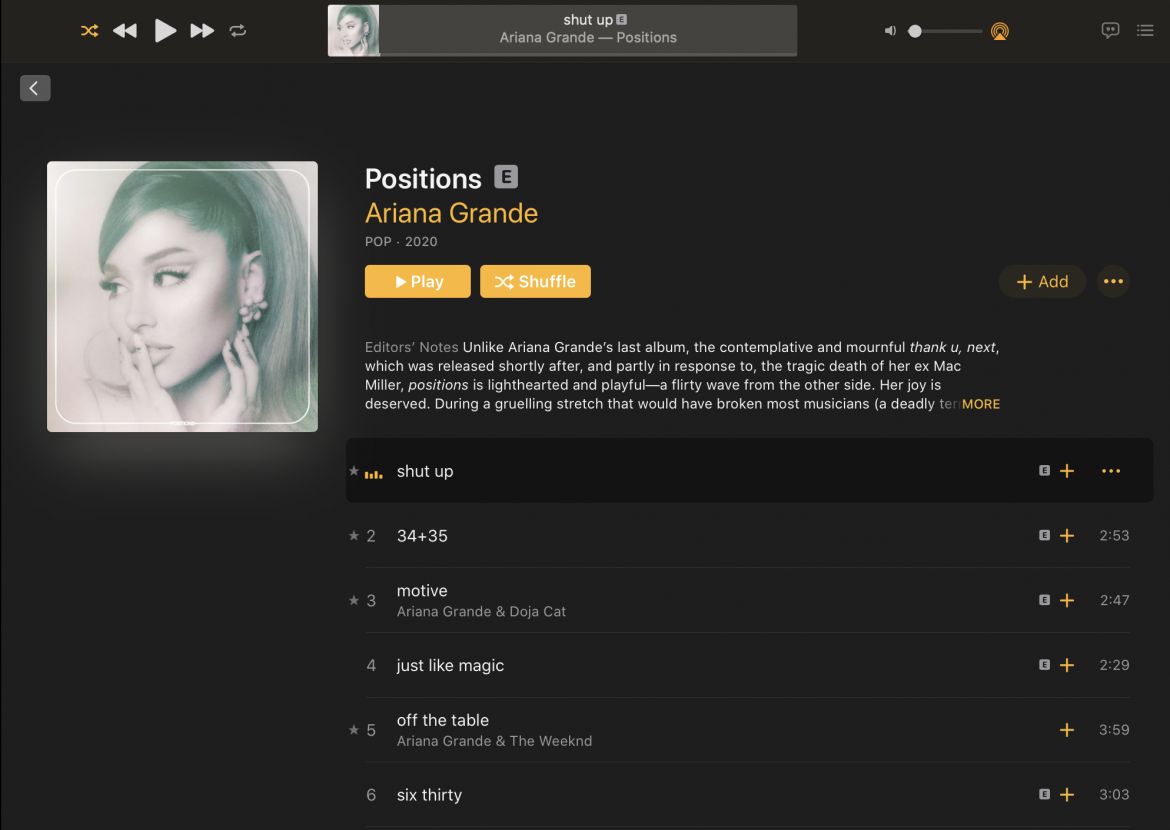 Ariana Grande has been one of the most powerful female voices in 2020. She has been using her platform to amplify the #BLM movement and bring awareness to the influence that youth have in the upcoming election. In 2019 Grande received the Billboard Music Award for Top Female Artist. Her songs have been a testament to what it means to be a woman embracing your voice and own individuality. Although Grande’s songs are usually upbeat, she has also opened up about her experiences, revealing tragedy, heartbreak, and mental health issues. That’s why this year in 2020 with her new release of positions in a world that is often challenging and uncertain, her music is met with embrace.

Grande’s new album positions released on October 30th displays her femininity and her new relationship. I’ll highlight my personal favorites on the album and what I consider to be the ratings for these songs.

This song has a catchy beat although, the lyrics are limiting at times. In other songs of hers, I have found the lyrics to be a bit more descriptive. The feature with Doja Cat is not too bad but I wish she had a bigger part in it. Otherwise, the song was quite enjoyable and playful, questioning her significant other’s motives with lyrics in the chorus like, “Tell me, what’s your motive?
What’s your motive?” repeatedly.

In this song Grande talks about how she is changing her life circumstances and has started to create a better version of herself through her mindset. This is perfect for someone that wants inspiration and a better outlook on life. Especially with lyrics such as these, “Just like magic, just like magic, Middle finger to my thumb and then I snap it, Just like magic, I’m attractive, I get everything I want ’cause I attract it” it can be very inspiring.

The Weeknd is in this song, from our very own city! It’s a melancholic song offering both undertones of sadness but a glimmer of hope for a do over in a relationship. These two singers harmonize well together, and the beat is refreshing, so for me it can’t get better than this.

Grande and Ty Dollar $ign are both so captivating in this song. His vocals match nicely with Grande’s voice. The melody captures you right from the beginning. The lyrics reflect on how Grande has no safety net since a relationship caught her by surprise. Yet, she is not afraid that this relationship will be ruining her plans and making her forget her past.

For me, this is one of my favorites since Grande pairs perfectly written lyrics with a catchy beat, so it is a nice balance. Personally, I think that this beat is one of the best she has on her album.

In this song, I enjoyed the chorus more than the beginning of the song since it started out slow. The chorus is catchy, harmonious and fun. Grande describes how her new relationship was a surprise but how it has been a high point for her compared to some of her other relationships.

This is another one of my favorites as it reminds me of her earlier albums. It showcases her relationship once again in a positive light and has a joyful feeling. Her lyrics are well displayed here, and the beat is slower than most of her other songs.
Overall, I thought Grande’s album positions was fun, catchy and inspiring. There were some songs that I personally felt lacked her usual creativity and lyrics (I did not include all of them in this review). Even though I was not too pleased, it does not mean I am not willing to be open to new things. It is understandable that artists grow and change over time. Several of her songs can show the joys of life and can allow people to relate to the challenges she has faced. For this sole reason, Grande is exactly what people need to hear in 2020.