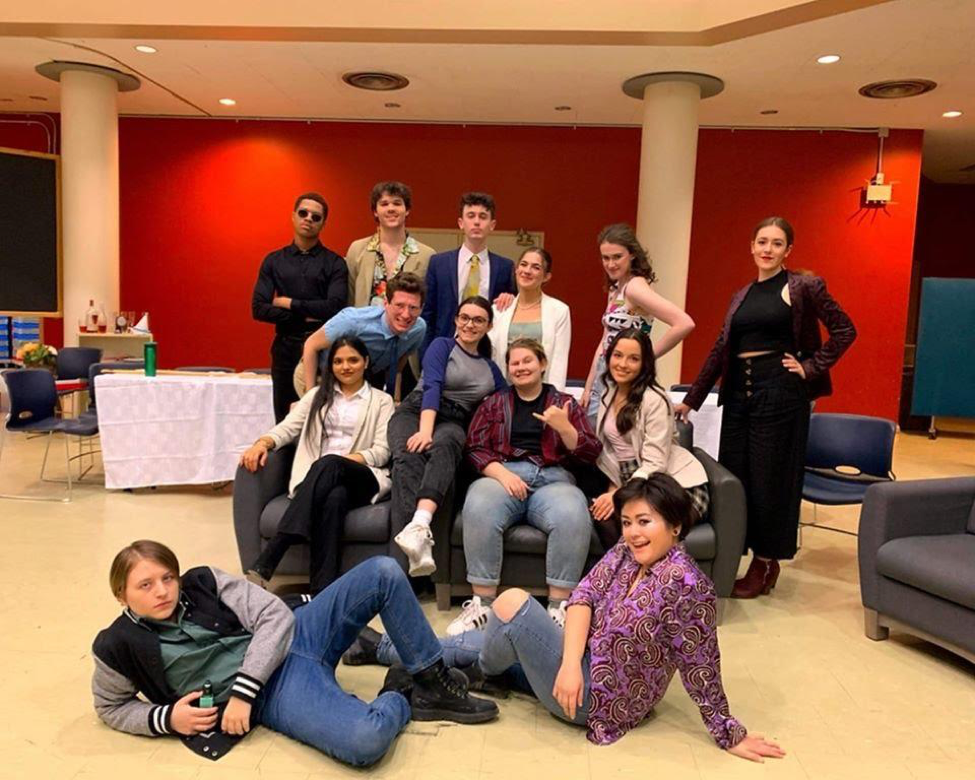 The Troubadours think the gods must be mad

Veronika Gribanova, formerly a student at the University of Toronto, has encountered some success with her theatrical comedy zounds! Situated all at once in a modern-day McMansion and in the halls of Mount Olympus during the mythical Trojan War, zounds! premiered in 2018 on New York City’s Atlantic Stage 2 before a second run at the 2019 Edinburgh Fringe Festival. Gribanova’s play has returned to the author’s alma mater in a production of the St. Michael’s College Troubadours. The Troubadours bring an appropriate mix of ribaldry and introspection to a piece that invites the audience to ask, what good are the Greek gods in 2019, anyhow?

The pantheon is assembled in all its dysfunctional glory, under the control of chic patriarch Zeus (Robert Fletcher), who has locked his siblings and children inside Olympus while the Trojan War wages in its ninth year. Those who are acquainted with Greek mythology will immediately understand that Gribanova is adapting Homer’s Iliad. However, whereas the Homeric poems directly show the give and take between the divine family on Olympus and the epic gestures of heroes on Earth, zounds! traps the audience with the gods, transmitting the audio of the war down below via an unseen TV. There are shades of Sartre’s No Exit in the play’s thesis: the only true punishment for privileged immortals is that they are stuck with each other for eternity.

The strength of zounds! derives from the script’s two competing impulses. The first is the playwright’s deep knowledge of the source texts. The Homeric poems have always been deeply intertextual, and any worthy follow-up has to contend with the sheer scale of intertwined mythology. Gribanova follows her ancient forebears in using a three-member Chorus to communicate the backstory, appropriately in segmented bits of exposition that hardly distract from the broad comedy played by the gods. The Chorus is depicted by three beleaguered employees who stand sentinel as their 13 divine bosses flit back and forth around the Sam Sorbara Auditorium at Brennan Hall. Hannah Spracklin’s stage management deserves much credit for creating an impression of the gods’ simultaneous constant movement and their claustrophobia.

Yet despite the debt to mythological tradition, the play is also praiseworthy for displacing some current stereotypes about the Greek gods. Hermes’ traditional self-confidence is exchanged for actor Gianni Sallese’s nervousness. Paris Molokwu plays Hades as a catty expression of the pantheon’s repressed incestuous desires, which runs contrary to the relative nobility that many modern Hades apologists would prefer. Curiously, the play suppresses the traditional virginity of Athena and Hestia, although asexuality and chastity might be sources of dramatic conflict and anti-oppressive writing in the updated setting. That said, Taranjot Bamrah turns in the strongest performance in her role as Athena, committed to justice and struggling to come to terms with her own culpability in the Trojan War.

By selectively committing to the mythological tradition and delving deep into the psychology of self-indulgent immortals, zounds! occupies an accessible middle ground in which mythology fans can anticipate the next fated event and newcomers still have plenty to laugh about. The divine familial antics often appear spontaneous and funny, but this is a smokescreen for carefully choreographed comedy. Director Angelli McGuigan comments on the rehearsal process, “If one word is off, the play stops.” One missed reference, one fumble in a cutting sibling jibe, and the feat of bringing the Greek gods into 2019 grinds to a halt. More credit to the Troubadours, then, for keeping the banter going for a brisk two hours.

That said, zounds! may still require some workshopping. The play’s central question appears to be whether the Greek gods — or in today’s terms, the “one percent” — remain relevant when the rest of society moves past its reliance on them. The climactic response to that question is too abrupt and opaque, interesting only to those who are already steeped in academic mythography. An improved conclusion to this play may emerge if the audience of zounds! is better defined. The legacy of the Homeric gods lends some dignity to a play that is essentially about the malaise of the idiot rich. That dignity could resonate with a wider audience if the play’s final response to the rich becomes more conclusive.