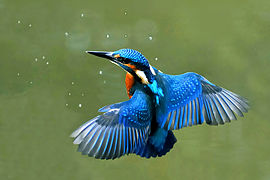 The call of the wild

Have you ever taken a long hard look at nature and marveled at its intricate systems at work to maintain life? Through many generations, nature has withstood the test of time. Animals have developed ways to overcome inherent problems in their dynamic ecosystems. These adaptations have been a source of inspiration for many people trying to solve issues in their fields of work. Biomimicry is the term coined to describe designs, materials, and algorithms that were in influenced by biology.

One notable form of biomimicry comes from the kingfisher, a very stealthy fowl that dives into the water vertically to catch fish before they can react. The bird’s large head and long narrow beak are shaped to reduce the rippling as it enters the water, allowing it to approach its prey stealthily. Stealth was a problem for the older Japanese bullet trains, as loud booming sounds occurred as the trains exited tunnels going 300 km/h. And by mimicking the kingfisher, the Japanese bullet trains could significantly reduce the noise when exiting the tunnels while going at breakneck speeds.

Aerodynamics have taken many lessons from nature, such as from the flippers of humpback whales, which have bumps on their flippers that allow them to make smaller turns. In scaled models, wings with tubercles have been shown to be more efficient than the traditional smooth design. These tubercles have been implemented in wind turbines and ceiling fans.

Another inspiration of nature comes from the gecko; the reptile can climb on walls and even on wet surfaces. This mechanical adhesion is achieved by lots of microscopic hairs on its feet called setae. The setae are spread into even smaller bristles called spatulae, which allow for a physical bond between the gecko and the surface. Inspired by this, scientists have created a credit-card-sized fabric that is able to hold 500 pounds. And because it does not rely on chemical adhesion, no tape residue will be left on the surface afterward.

Another disruptive material taken from nature is an anti-fouling layer developed to mimic shark skin. Fouling is the accumulation of unwanted materials on surfaces; on boats this includes barnacles, sponges, and bacteria. The attachment of these organisms increases drag on boats, slowing them down and making them less maneuverable. Shark skin is made of tiny scales with micron-sized bristles, which makes them rough to touch when stroking in one direction. It also doesn’t allow for organisms to attach to their skin, a natural anti-fouling material. The shark skin patterned design has seen applications in boat hull coatings and even the coatings of hospital walls, where the coating helps reduce the growth of bacteria on the walls.

Apart from the physical sciences, we have also adapted animal behavior models into algorithms to solve mathematical problems. Ant colony optimization is a technique used to find the optimal path, modeled on the action of an ant colony. The particle swarm optimization technique was inspired by the flocking of birds and was first intended to simulate their social behavior. Now this technique has found applications in antenna design, the biomedical industry, and have also been used to predict financial risk.

Chemists have taken advantage of nature in a different way; they have managed to manipulate organisms into producing their desired compounds. This technique is something humans have been doing for a long time. For example, we have cultivated yeast to produce alcohol. In newer bioreactors, scientists are experimenting with ways to create complicated chemicals, like insulin, and to improve sewage treatment.

In the realm of nanotechnology, scientists have developed molecular machines. These are nanoscale devices that are made up of a small number of molecules. To make these tiny machines move, scientists have adopted techniques derived from biology: nanomotors and molecular walkers have been inspired by biological components such as muscle contractions, ion pumps, and the movement of ribosomes on DNA.

Biology has been a source of inspiration in all disciplines. Scientists and engineers have applied lessons learned in nature to real world problems, and some have seen major improvements in their fields. So, the next time you’re stumped on a design problem, one that straightforward intuition cannot solve, I implore you to look out the window and see if this problem has already been solved in nature.