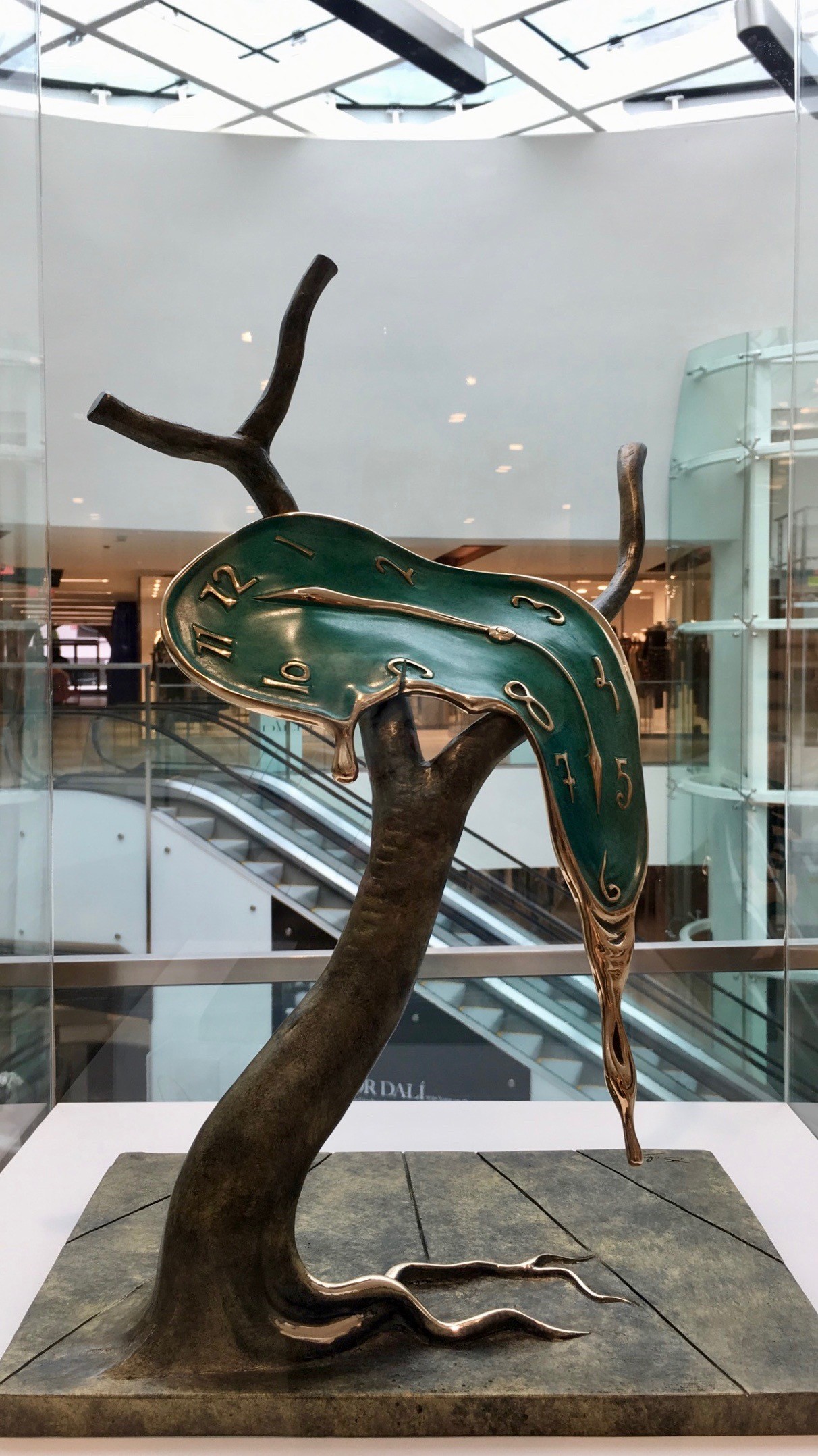 Though the 2017 Toronto Fashion Week came to a close, Yorkville Village was not quite ready to say goodbye to the designers and artists who inspired the runways and attendees. Just five minutes north of St. Michael’s College, the boutique shopping centre continued to cultivate the ambiance of Fashion Week. Proudly hosting the Hazelton Fine Art Galleries’ specially curated collection of paintings and life-sized sculptures by late Spanish artist Salvador Dali, the exhibit was a complete success. The first of its kind in North America to display an artistic curation of Dali’s work (for sale and for perusal), this specially selected exhibit of approximately 30 pieces was comprised of unique paintings and bronze sculptures.

One of Dali’s most symbolic pieces, “Profile of Time,” commonly identifed as “the melting clock,” was a focal point of the exhibit. This bronze sculpture, hand-painted in green and gold, was first cast in 1984. For further exploration, the art statement below the piece gave a commonly accepted interpretation: “As the watch liquefies over the tree, it forms into a human pro le, underlining the interminable relationship between man and time. The unexpected softness of the watch also represents the psychological aspect whereby time, whilst considered to be precise and fixed in its nature, can, in fact, vary significantly in human perception. All men must bend to the passing of time. We see Dali’s pro le in the face of the clock. There is a tear falling from his eye, lamenting the path of life that all men must travel.” As it is conveyed through the artistic interpretation, Dali’s natural use of symbolism is embodied in the sculpted image of the melting clock to portray the intertwining connection between humans and time. The significance and meaning of this piece has been debated for the past century and will undoubtedly continue.

The collection also includes sculptures such as Homage to Fashion and Woman Aflame, bringing Dali’s unconventional surrealism to life-size form. Homage to Fashion, a significant piece specific to this exhibit, echoes the central idea between the combination of Dali, Yorkville Village, and Hazelton Fine Arts Galleries. The remarkable piece was first conceived in 1971 and was also cast in bronze. The sculpture is commonly interpreted as a representation of Dali’s relationship with the fashion world; a relationship that was first formed in the 1930s and lasted the duration ofhis life. His work has stimulated immense creativity in both artists and designers of his time and will continue to epitomize innovative and masterful surrealism.

In addition to the paintings and sculptures on display, Dali’s work is further accompanied by dresses created by fashion designers who have paid homage to the artist for his prominent influence on each of their own successes. Among the notable designers is 20th century Italian fashion designer Franco Moschino, who openly attributed a portion of his accomplishments to Dali. On display at the exhibit was Moschino’s playful T-shirt dress, which commemorates and alludes to Dali’s iconic mustache. It is no wonder Dali’s eccentric yet strikingly methodical paintings and sculptures have gathered international attention since the 19th century.

Dali’s innate ability to take risks in his art is evident both at the exhibit and throughout his personal history. Regardless of the motive Dali used before creating one of his famous pieces, his symbolic intricacy is always apparent. With reference to the work itself, it is evident that Dali was never limited to an individual style or medium. As the exhibit demonstrates, Dali’s decades of art are cultivated across many different forms — from drawings, paintings, and sculptures to films and photographs. Most of Dali’s art reveals a constant growth and evolution of himself as an artist; from early impressionist paintings through his transitional surrealist works and into his classical period, his art transcends time. His notable transformations through- out the 19th century’s artistic movements are reflective of his own growth and evolution. Nonetheless, Dali’s ability to adapt to different periods is commendable and will continue to set a standard for all artwork proceeding him.