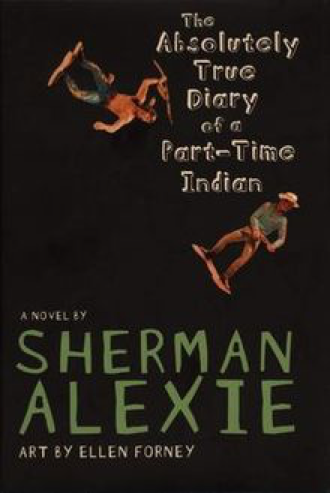 The title says it as it is. Sherman Alexie, the author of the astounding novel The Absolutely True Diary of a Part-Time Indian, was born a Spokane Indian. He grew up where the novel takes place, on a reservation, also referred to as the “rez” in the book. The “rez” he grew up on was set in Wellpinit, Washington state. Throughout the novel, the readers begin to notice the similarities between Alexie and the main character Junior. The main character was born a hydrocephalic and so was Alexie. Similar to Junior, Alexie attended Reardan High School off of the reservation, near a rich farm town area where all the other students were white. The novel was able to transform his life experiences into an excellent read for the students of the “Children’s Literature” course (ENG234) at U of T.

Junior speaks directly to the reader and is also the illustrator, cartoonist, and narrator of the novel. He feels terrible about his life, gets beaten up due to his lisp and disability, he stutters, and “looks like a freak.” Alexie uses this anger built up in Junior through his illustrations where he can express what is it like to live his life. The bestselling author tells the story of Junior’s experiences using words and images of cartoons which are able to speak to the reader on different levels. Junior is determined to take his life into his own hands as a budding cartoonist who deserves to be given the same opportunity as others, which is why he attends Reardan High School.

For 15 years coming, Sherman Alexie has been faced with the many troubles of surviving between the differences of the Native and white worlds. Alexie has done so by exploring through various different characters and genres, but The Absolutely True Diary of a Part-Time Indian has truly spoken to its audience that consists of students, teachers, and others. Alexie has been able to work with the voice of a teenager, which has allowed him to use true emotions and thoughts so that the reader feels as though it is being read to them by their friend or parent.

The students of the English class at U of T read this short novel as one of their required readings for the semester. However, the text has proven to be much more than a reading that was forced upon them. The novel provided insight and thought-provoking questions to the reader and allowed the reader to expand their thoughts on the differences between the Native and white cultures. The influential ending leaves the readers with a sense of happiness and clarity, although can be left for interpretation for different individuals. The novel was able to teach its audience that there is plenty of joy to be had. The Absolutely True Diary of a Part-Time Indian does not hide any details but offers the readers a funny and hopeful read full of resiliency, metaphors, and relationships that take a turn for the better. Therefore, even if you are nothing like Junior, the novel will still present itself as absolutely true and relatable in many ways.