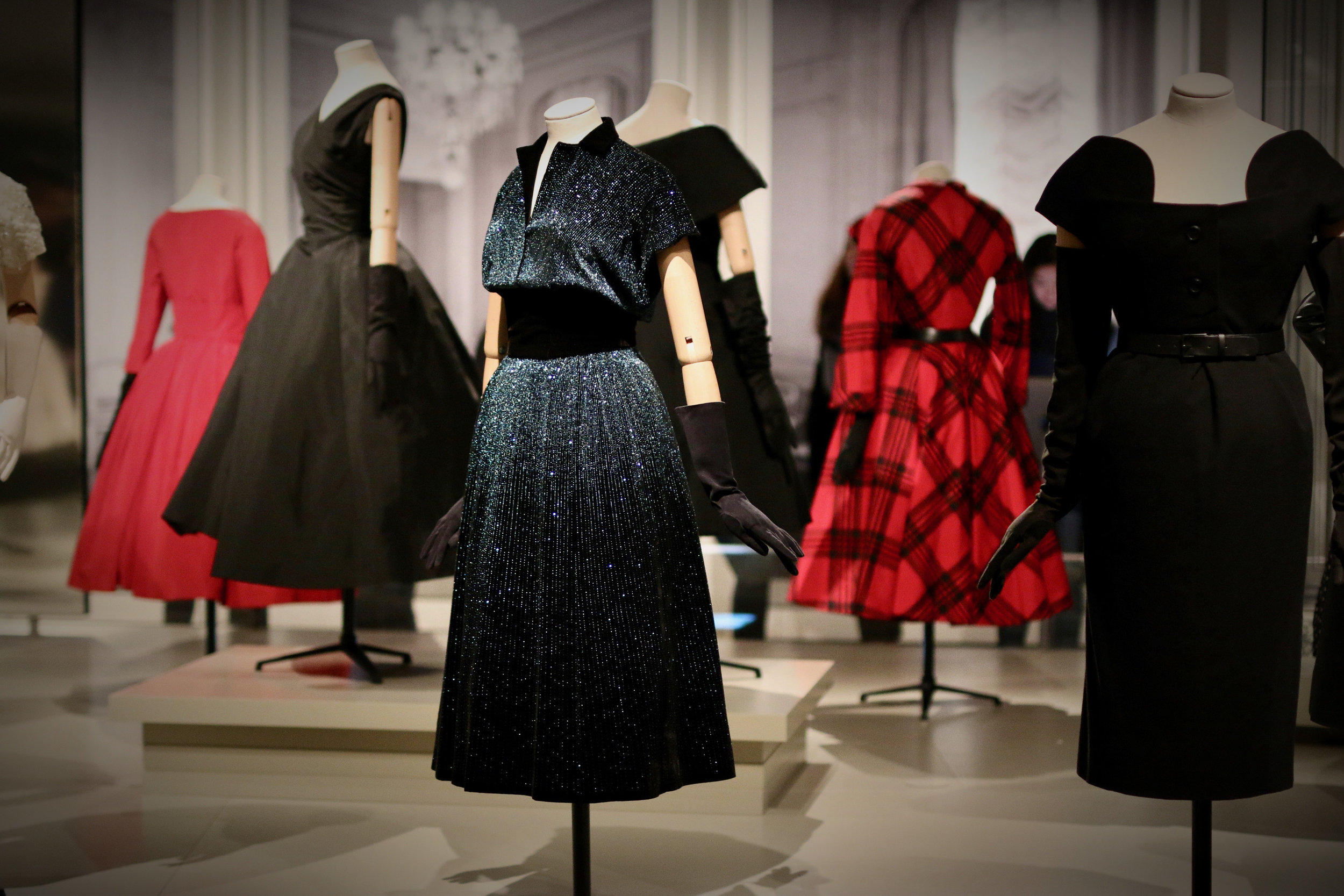 Christian Dior, an original exhibition at the ROM

My grade 11 European History teacher was unimpressed when I devoted our research period to a book on Christian Dior. He was even less impressed when I tried to reason that fashion was a valuable source of history, a position I still maintain. I based my reasoning on the fact that Marie Antoinette once accessorized her hair with a replica of Belle Poule, the French frigate that damaged a British ship during the Battle of Ushant, effectively involving the French in the American War of Independence.

Over two centuries later, Dior’s legendary creative head, John Galliano created the “Marie Antoinette” dress. The 18th-century inspired gown featured panels that depicted the rise and fall of France’s indelible queen. One panel pictured Marie Antoinette in a glamourous guardainfante with the iconic mile-high hair; on the other, she is portrayed in a markedly plain dress heading toward the guillotine.

In conjunction with Christian Dior: Designer of Dreams, a 500-piece retrospective at the Musée des Arts Décoratifs in Paris, the Royal Ontario Museum (ROM) presents Christian Dior in commemoration of the fashion house’s 70th anniversary. On display in the ROM’s Patricia Harris Gallery of Textiles & Costume, the exhibition features a modest number of famous pieces like: the “Venus” ball gown (1949), the “Tour Ei el” evening jacket (1949), the “Palmyre” ball gown (1952), and the “Delphine” cocktail dress (1956). “We don’t really need another great Dior exhibition with all the fabulousness. There’s one in Paris,” said Alexandra Palmer, Senior Curator. “I’m an academic,” she continued. “What I love is to unpack all this stuff and explain things from a different point of view.”

Palmer purposefully drew from 22 collections from 1947 to 1957 — characterized as the house’s postwar golden age. “The Christian Dior fashions in this exhibition are beautiful. But beauty alone does not explain how Dior made ‘women feel like women again’ after the Second World War,” Palmer said, “And why millions of women around the world were influenced by his designs. It is this complicated mix of the personal, the aesthetic, and the economic that makes fashion such an endlessly fascinating subject of research, and explains why a dress is so much more than just a pretty dress.”

Seventeen months after the end of World War II, Christian Dior presented his first collection entitled “Corolle.” “It swept away the wartime masculine style with padded shoulders and knee-length skirts,” Palmer explained, “Replacing it with an ultra-feminine sil- houette that accentuated the bosom and waist, quite unlike wearing wartime fashions.” At the time, Editor of Harper’s Bazaar, Carmel Snow dubbed Dior’s collection the “New Look.” The cinched waist and full skirt created the postwar ideal of hourglass femininity, which garnered the haute couture house instant fame.

At a time when women’s roles were changing, postwar women were expected to give up their wartime jobs and resume their post in the private sphere. Though some may be inclined to dismiss Dior’s vision as retrogressive in that he redrew the lines of femininity, Dior himself explained that: “All around us, life was beginning anew; it was time for a new trend for fashion. The war was over… What did the weight of his sumptuous materials, his heavy velvets, and brocades matter? When hearts were light, mere fabrics could not weigh the body down.” Indeed, “the return to more constricting styles after the freedoms of wartime dressing seemed at first counterintuitive, but at the same time, Dior had a very strong idea that resonated with how women wanted to look,” Palmer said. “I wanted my dresses to be constructed like buildings, moulded to the curves of the female form, stylizing its shape,” Dior explained.

By 1953, Dior accounted for 5% of all French exports. “Dior wanted all women to be elegant, regardless of finances,” Palmer explained. “His fashions captured the excitement of postwar modernity and have stood the test of time. With the assistance of his imaginative pattern makers, tailors, and seamstresses, Dior created striking, elegant, and poised fashions that accommodated all women for all times of day and night. This sophisticated and integrated vision continues to resonate and guide the creativity of the House of Dior.”

My takeaway from the exhibition was that my grade 11 defence of the relationship between fashion and cultural history was defensible. Had my defence taken place today, I would have directed my teacher to Christian Dior, and perhaps to Virginia Woolf’s Orlando: A Biography. As Woolf writes: “Vain trifles as they seem, clothes have, they say, more important o ces than merely to keep us warm. They change our view of the world and the world’s view of us.”