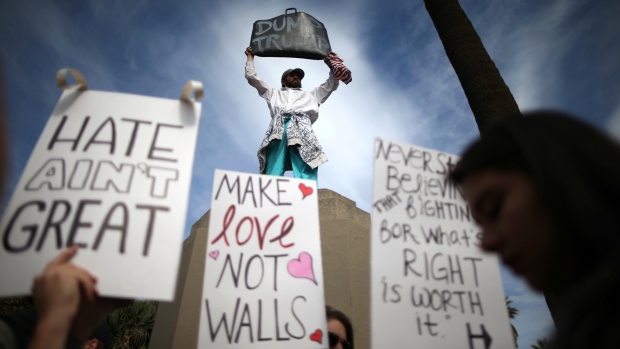 The creative dissent of US Immigration Ban protests

On January 20, former reality TV star and embodiment of all things wealthy, white, and bigoted, Donald J. Trump, was sworn into office as the 45th President of the United States — thus becoming a figure colloquially known as, the “Leader of the Free World.” As we approach the widely-feared and corporate holiday known as Valentine’s Day, we have sadly learned that in fact, love might not exist: at least not in the Trump administration. Tossing aside non-essentials like human decency, respect, trust, experience, eloquence, the popular vote, and adjectives alongside facts, Trump has defied all odds and proven himself to be just as horrendously heinous as suspected, if not worse.

As we approach the widely-feared and corporate-owned holiday known as Valentine’s Day, we have sadly learned that love in fact does not exist: at least not in the Trump administration. Tossing aside non-essentials like human decency, respect, trust, experience, eloquence, the popular vote, adjectives, and facts, Trump has defied all odds and proven himself to be just as horrendously heinous as feared, if not worse.

Protests quickly sprang up around the world with the first and largest being the Women’s March in Washington on Saturday, January 21. Sister marches were held on all 7 continents (including Antarctica!). Between Trump affirming his support for the construction of a Mexican-American border wall, reviving the Keystone XL and Dakota Access Pipelines, and invoking the Mexico City policy, protesters had plenty of outrage to express. However, Trump’s worst and most immediately destructive move came on January 27 in the form of Executive Order 13769 which bans all citizens from seven Muslim-majority nations from entering the United States for 90 days.

Nationals from Syria, Iraq, Iran, Somalia, Sudan, Libya, and Yemen found themselves unable to leave their homes in fear they would be unable to return. Meanwhile, returning citizens and incoming refugees are being turned back at borders.

Although Trump has framed this order as an anti-terrorist measure, in the past 35 years not one American death has resulted from the actions of refugees from these seven nations. Excluded from the list is trading partner Saudi Arabia, where the majority of 9/11 terrorists originated. Most middle eastern nations from where anti-US radicalized terrorists have originated are excluded from the list. Many see this as the latest in a series of anti-Muslim actions and statements that aim to encourage Islamophobia and the false association of Islam with terrorism. In response to this latest move, an anti anti-Muslim ban protest was held outside of the US Consulate in Toronto on Monday, January 30.

The air was filled with signs, some with phrases chanted by protesters like the one pictured above. “No Ban, No Wall, No Bannon” made reference to Steve Bannon, Trump’s Chief Strategist and former executive chair of Breitbart News, an alt-right online news site. Many have criticized Bannon’s appointment, citing his history of Islamophobic and xenophobic comments as well as his position at Breitbart, in which often takes extreme right-wing stances and vocalizes support for individuals and ideologies associated with the neo-Nazi movement.

Many signs expressed support for refugees hoping to resettle in the United States and Canada. Nearly one third of the world’s refugees come from Syria and Somalia, two of the nations on the list. This ban affects both refugees waiting for relocation into the US and those in transit. Some signs like “HELP REFUGEES ESCAPE WAR” include stark images, forcing spectators to confront the severity of this ban’s effects.

While many of the signs reflected the seriousness of the views they supported, some took a lighter approach. Many protesters took the opportunity to express their dissent through humour, most of which brings to light the contrast between the optimism of the Obama administration and the fear that is becoming the hallmark of the Trump administration.

These signs highlight the absurd shift in positions from reasonable anti-Trump views expressed before the election to the post-election detrimental complacency of many of Trump’s cabinet and Republican party members. These signs are not “ha-ha” funny. We laugh because they reflect a disappointing and utterly ridiculous situation. We laugh because that’s all we can do when something is simultaneously this silly and distressing.

Indeed, it seems that we are living in dark times. The egregious actions of this administration have mobilized generations of people who brand themselves as “not typically political.” Kids, parents, teens, tweens, retirees, and even dogs rocking sign couture are showing up at protests in hordes, gathering online, creating networks of support and protest to defy the early actions of the Trump administration. Freedom of speech and expression remains a constitutional right, and defiance continues to be heard through speech, shouts, drawings, tweets, and signs. Within two weeks, the world has made one thing clear: we will not stop fighting so long as our governments pursue injustice.