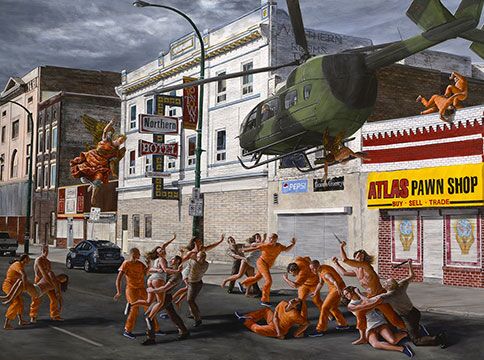 A Review of Kent Monkman’s Shame and Prejudice: A Story of Resilience

Kent Monkman’s touring exhibit Shame and Prejudice: A Story of Resilience is a work of monumental scope; the entire exhibit is a feat of multiplicity. Every room of the gallery is filled with brilliant details and every detail so rich with thought. The content is both historic and also, heartbreakingly current.

Narrating the journey through the exhibit is Miss Chief Eagle Testickle, who also appears in many of the large-scale paintings and sculpture scenes. Miss Chief, a two-spirited Indigenous person, experiences the impact of the western culture and helps shape Indigenous Canada’s history. Miss Chief’s identity as a two-spirited person is the perfect embodiment of the multiplicity of the exhibition, not only in that they express both male and female traits but also in the union of the historic and contemporary. Traditional Indigenous culture accepted having a gender identity that did not fit into the gender binary and was confirmed by Elders of their tribe. In contrast, until quite recently Western culture has not been as accepting.

Kent Monkman uses traditional Western cultural elements like biblical allusions, Canadian political portraits, and classical art motifs to again bring the Indigenous experience into the Western consciousness. Nearly an entire room of the gallery is dedicated to various historic drawings of the Fathers of Confederation in various presentations. The main piece in this room is Monkman’s painting of the Fathers of Confederation with Miss Chief posing nude in the centre, with black heels and sitting on a Hudson’s Bay blanket. What can be seen when stepping closer to the large painting is that every one of the politicians has bright blue eyes, completely bloodshot, and is staring at Miss Chief. The harshness of the bright blue and red connecting in their eyes is oddly alarming, hard to look at, and does a fantastic job of both drawing the audience in to see the detail and distancing the audience emotionally.

In using vibrant colours for all of his paintings, Monkman brings the often quite violent content of his painting out of shadows and into the full light of day. One that stood out for me was the painting of RCMP officers and Catholic priests ripping young Indigenous children from their mothers. Everything about the scene is horrible but the vibrancy of the colours is the element that stuck with me the most as I left the room. The bright, aggressive red that has always been a colour of Canadian patriotic pride appears all over the painting, but worn by violent kidnappers. The whole scene feels surreal, but these events happened and that should not be forgotten.

Kent Monkman’s work is massive, both physically and emotionally. It bridges monumental gaps in cultural history and brings to the front (literally placing these paintings in the first gallery room) the lasting effects of that violent history in the present. Monkman’s art is brilliant, beautiful, and exceptionally hard to look at. Shame and Prejudice: A Story of Resilience is one exhibit all Canadians should see and reflect on deeply.

Shame and Prejudice: A Story of Resilience is on now at the University of Toronto Art Museum in University College until March 4th.