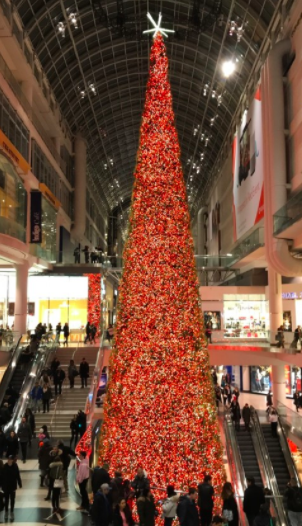 It’s known that in the winter season you are limited to certain activities. Everyone would rather be bundled up at home watching Netflix and eating whatever they can get their hands on. One of the only things you could think of doing is to visit the annual Toronto Christmas Market, held in the Distillery District, but the long line-ups are unbearable in the winter conditions and can be out of the way for those who are commuting. Why not consider visiting downtown Toronto for some Christmas festivities instead?

After you have finished all your shopping and have seen the massive, shimmering Christmas tree, you could exit the Eaton Centre onto Queen Street and see the beautiful display of the iconic holiday windows presented by The Hudson Bay Company and Saks Fifth Avenue. This year was the second year of the reveal, which was presented on November 2. The windows featured scenes from many holiday classics such as Charles Dickens and Disney’s Snow White and the Seven Dwarfs, as well as presented many characters and magical effects. The Hudson Bay Company included five windows with the theme of “Shake Up Your Holidays” that presented snow globes of many beautiful electronic holiday scenes, even two polar bears meeting for a high five and a starry holiday scene set against Toronto’s landmarks. Saks Fifth Avenue decided to honour the 80th anniversary of the timeless Disney classic Snow White and the Seven Dwarfs. The five windows incorporated Snow White in her wardrobe in multiple forest backdrops. These window displays are not just for Christmas shoppers but for all pedestrians to view on their way along Queen Street.

Toronto is a city filled with many tourist attractions and activities for various occasions, and the winter season is no exception. If you are ever looking for something to do, make sure to check out the activities going on in your local neighbourhood or downtown before deciding to stay indoors. The Christmas season could be a cold couple of months, but don’t summon yourself to the indoors without discovering what’s going on in Toronto, especially on Queen Street.