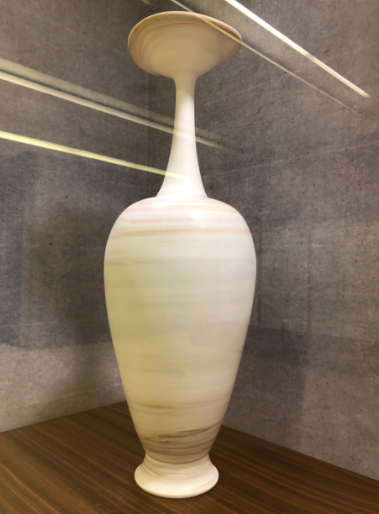 Vessels and vases are known to be timeless pieces of art. Since antiquity, they have served as classic functional and decorative items in any room or space. A wide array of glass, earthenware, and porcelain vases has adorned the castles of Roman and Chinese emperors, and the studios of hardworking potters of the ancient civilizations. Their beauty resonates through time and in various places of the world. The Gardiner Museum showcases these timeless beauties as you are immediately welcomed by the lobby’s captivating clay art display entitled Japan Now: Form + Function.

Curated by Joan B. Mirviss, the display showcases 10 unique vessels created by “leading and emerging artists” who are making an impact with their innovative, fresh, and brilliant artistry in the ceramic world. The vessels, inspired by Japanese, Korean, Chinese, and western designs, feature the marriage of traditional and avant-garde ceramic art while underscoring their form and function in a highly sophisticated manner. According to Encyclopedia Britannica, the rich history of Japanese pottery can be traced back to the Jōmon period (10,500–c. 300 BCE). Since its early history, Japanese vessels are created for daily use while emphasizing their “sophistication of form” and ingenious design.

Each vessel of this display expresses the beauty of the natural world in creative ways. The Neriage Bottle by Itō Hidehito mirrors the elegance of nature as seen through the whiteness of the marbleized porcelain. The vessel’s grandeur and simplicity pays homage to Chinese aesthetic. Inspired by the Greek amphora, the vessel’s elongated and narrow neck resembles a flower’s stem while the vessel’s mouth spreads open like a flower in its bloom. On the other hand, Nakamura Takuo’s stoneware called Vessel that is not a Vessel exhibits a contemporary blend of kutani polychrome porcelain and 17th-century rinpa decorative painting. Inspired by Japanese literature, the vessel is beautifully designed with irises accentuated by a gold detail and a metallic glaze. It defies the common appearance of a vessel because of its distinct rectangular and curved shape, and its horizontal position on the surface. Takuo brings much life to his artwork by balancing the exterior and interior spaces, while incorporating earthy colors to his design. According to Mirviss’ website, Takuo says, “It is my hope that my work successfully initiates a dialogue between the artist and the eventual owner that continues with every use. I believe that the true completion of my work can only be accomplished through the creative implementation on the part of the user.”

If an artwork had the ability to move on its own, then Ogata Kamio achieved such stunning artistic motion in his marbleized work entitled Neriage Vessel. Kamio’s choice of neriage (marbleized clay) reflects his meticulous technique in putting together paper-thin layers of graduated coloured clay. The result is a diagonal and pleated surface that resembles the calming movement of ocean waves endlessly flowing toward the vase’s opening. One would have thought the visual effect of Kamio’s work was a trick done by light or an optical illusion of one’s mind. Viewing the Neriage Vessel is definitely a playful and interactive experience between the artist and observer.

Every vessel left me awestruck with its impeccable craftsmanship. To be able to translate the beauty of the natural world is one thing, but to be able to trigger emotions is beauty in itself. That is exactly how I saw it. I saw it as beauty unfolding before my eyes. The truth is that I would not be able to describe this timeless beauty without seeing and feeling the experience. Beauty captivates your senses. It is through experience, not words, that beauty comes to life.

The Japan Now: Form + Function lobby display at the Gardiner Museum will run until April 22, 2018.