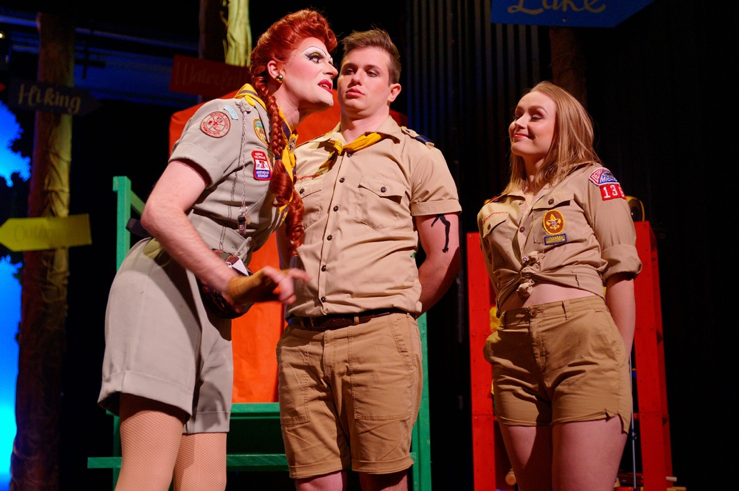 Hart House Theatre has been an important contributor to the University of Toronto’s theatre and art scene since its inception in 1919, and the productions showcased have definitely cemented themselves as must-sees in the academic year. To finish off the 2018–19 season, Hart House Theatre presented Retreat, a play written by Kat Sandler, a notable voice in indie theatre, and directed by Claire Burns who is notable for her work in previous Hart House Theatre performances such as Rocky Horror Show and Reefer Madness. The plot is unique; four career-driven interns at an elusive firm find themselves in the middle of the wilderness, forced by their employers to take part in a “retreat.” They are headed by Scout Master Candace, who encourages them to enjoy the camp rather than focus on their jobs, and the rest of the play progresses with the audience wondering if the characters are really taking part in a team-building exercise or their own version of the Hunger Games.

The play starts off with a bang as we are introduced to the four interns, who are engaging in a one-sided interview simultaneously. For those of us currently going through the job search process, the comedic opening is uncomfortably familiar. At first glance, the characters seem stereotypical: Jordan the dumb jock, Nicole the mean-spirited career woman, Kira who is cautious and scared of her own reflection, and Paul who is sensitive but has underlying sadistic interests. However, as the play progresses we see that each character has more layers than their stereotypes suggest. One of my favourite moments is when Nicole, or Lady Beetle as Candace dubs her, reveals that she is judged as incompetent by her father just because he believes that women are not ruthless enough for the world of business. So she lives her life as a son would, becoming cold and unforgiving as a result. The actors bring out the best of their characters, and the chemistry that they have with each other makes you believe that these really are competing co-workers.

One of the highlights of the play was Candace Matchwick, played by the charismatic Pearle Harbour. She is introduced with a grand entrance and has an equally grand exit, looking regal in a cape made from a parachute. She seems to be the only voice of reason in the play, telling the interns to seek more than merely their employment and setting up mindless tasks which include a drunken truth-and-dare session around a campfire. Her script is especially memorable, including an ending monologue in which she tells the audience that there is a flame inside all of us and that we should “nurture the good fire.” It’s almost impossible not to fall in love with the character, or the actor, by the end of the play.

All in all, the performance was darkly hilarious and not a single member of the audience hadn’t laughed at some point. The script was fast-paced and witty, peppered with unforgettable moments such as when Kira stares directly into the audience and asks, “What if they’re watching us?”, almost breaking the fourth wall. I was on the edge of my seat the whole time as twist after twist was introduced, and could never have guessed the ending. Retreat was a definite Friday night treat, and was featured at Hart House Theatre from March 1 to 9.