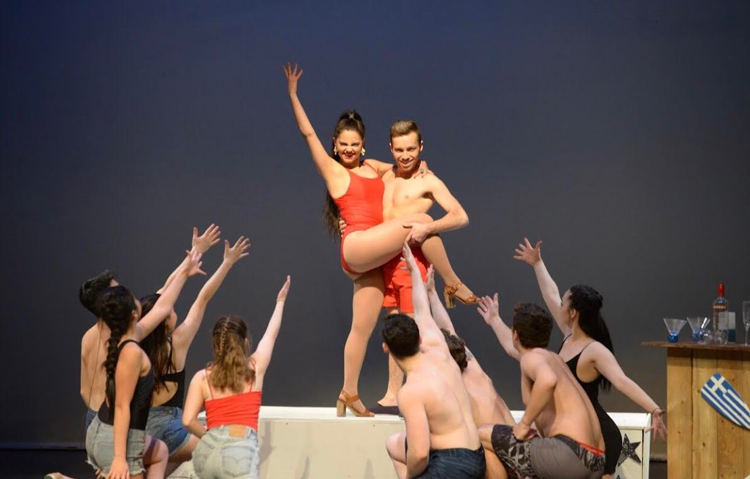 Almost 20 years since the musical’s first performance, the Victoria College Drama Society takes Mamma Mia! to the stage of Isabel Bader Theatre in its full flamboyance and grandeur. Celebrating the renowned and well-loved songs of Abba, members of the audience could not help but partake in the performance through singing, foot-tapping, and constant movement.

Notable mention ought to be made to Lisean Henry, playing Donna. Her aura throughout undoubtedly reflected the character’s winsome love for her daughter, and she created an entertaining anxiety around her conundrum. Renae Wolfesberger’s outstanding portrayal of Sophie and melodic voice allowed the audience to feel the protagonist’s longing and frustration, and then finally her appreciation for what she had. The supporting lead Alexandra Palma’s performance as Tanya was exuberant and energetic, with a hilarious touch of sass. Likewise, Elizabeth So’s performance as Rosie depicted the character’s eccentric personality and unwavering loyalty, as well as a humorous yet touching surrender to her feelings in “Take a Chance on Me.” The three fathers and the ensemble also presented considerably stirring performances in their respective roles. More often than not, in reviewing a theatre piece, the question to be asked is not so much whether the audience believes what they see onstage, but whether the actors themselves believe what they are doing. These actors achieved this spirit reasonably well.

In spite of its numerous merits, the show did have its shortcomings, one of which was the set. Whether it was a deliberate act of the director’s vision, or simply a means of providing more space onstage, the set may have had a greater artistic effect had it been more elaborate. Another weak spot was found in several vocal performances, some of which were flat or lacked confidence. This being said, Abba’s songs, though very popular and likely choices for an impromptu shower ballad, are quite difficult to sing well. Abba music’s apparent simplicity is undergirded by intricate musical artistry which contributes to its magnificence. All in all, the cast and crew put on an engaging show.

The final numbers comprising the entire ensemble were particularly enjoyable, and paid a much appreciated tribute to the legacy of Abba music in general. In other words, the final numbers refused to let the audience go until they enjoyed the songs outside of their respective scenes. The beloved hit “Dancing Queen” had this effect in the most significant way. While the song is used in a scene as Tanya and Rosie’s musical encouragement of a melancholy Donna, here it served to be an invitation to simply enjoy the music.

In most jukebox musicals, the music is what makes the show so entertaining. In this show, the cast did not allow the music to be the sole determinant of its splendour, but offered a performance which presented a captivating story of passion, regret, humility, love, and entertainment. Though it may seem cliché, this performance left me in awe, and thus, it is more than fitting to simply say: “Thank you for the music.”