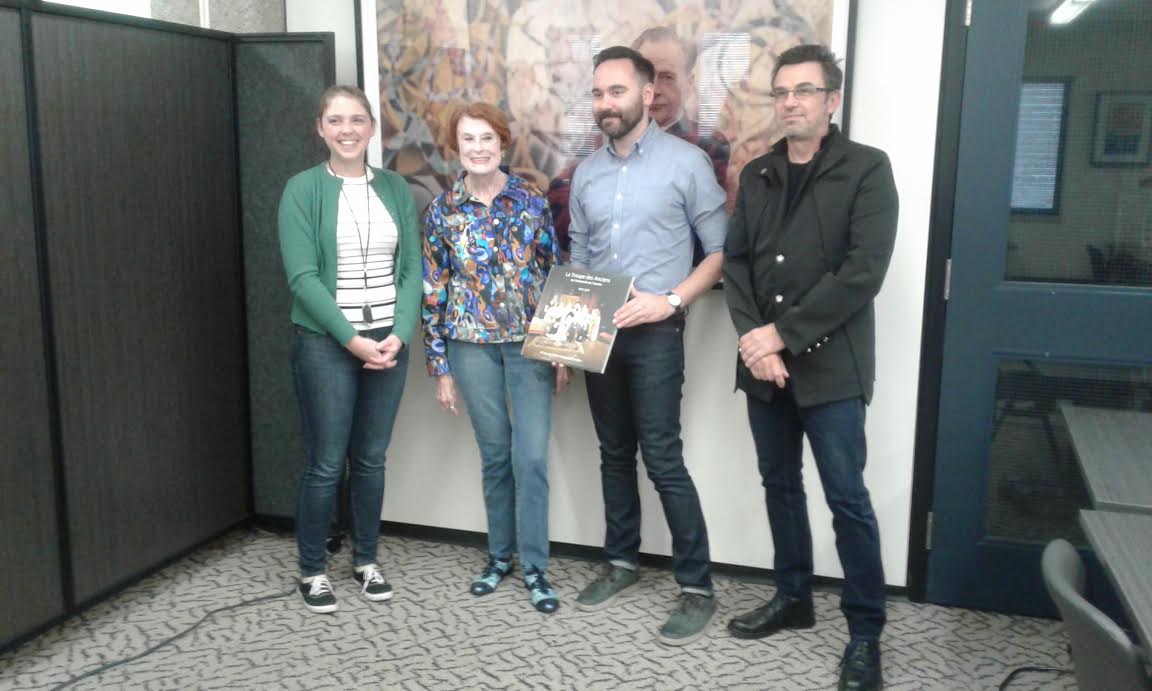 Professor Emeritus Paulette Collet, the artistic director of La Troupe des Anciens, hands over a copy of the book celebrating the exploits of the Troupe during the last 50 years to the library staff

Tuesday, September 10, 2019, was an important day for French-speaking residents of Toronto. At 3 p.m. that afternoon, the archivists of John M. Kelly Library at the University of St. Michael’s College (USMC) celebrated a new collection that acts to preserve the achievements of La Troupe des Anciens. La Troupe des Anciens, a francophone theatrical troupe that has performed annually at the University of Toronto since 1969, celebrates their 50th anniversary with this collection.

The troupe owes its origins and continuing success to the work of educators. Its full name, La Troupe des Anciens de l’Université de Toronto, is translated to “The Alumni Troupe of the University of Toronto.” The troupe emphasizes on its homepage that it aims to educate high school and university students. This it does with annual performances of the great playwrights of metropolitan France, including Beaumarchais, Lévy, and especially Molière.

The members who attended the event at Kelly Library are proud of their ongoing success in communicating these formative works of the French language to the multilingual audiences of Toronto. Last April’s production of Molière’s L’Avare (The Miser, 1668) was performed in French but included many tools to make the show accessible for English-speaking audiences.

Many of the troupe’s long-term members are educators. Roberto Machado, for example, taught French at Harbord Collegiate Institute just down Harbord Street, west of Robarts Library, from 1970 to 2010 before earning a Ph.D. in Literature from the Department of French Studies. The troupe’s Artistic Director, Paulette Collet, received her Ph.D. from Université Laval. Her educational work includes simplified versions of beloved texts like Gaston Leroux’s Le Fantôme de l’Opéra and Victor Hugo’s Notre-Dame de Paris.

The Department of French Studies is attentive to its community; it included a generous donation to the publication of the coffee table book attached to this anniversary, La Troupe des Anciens de l’Université de Toronto. 1969-2019. 50 ans de théâtre français à Toronto.

According to Jessica Barr, USMC Archivist, an edition of this commemorative book will be available for general circulation in the Kelly Library later this fall. A second edition will remain in a special collection along with other artifacts from La Troupe des Anciens’ 50 years of productions.