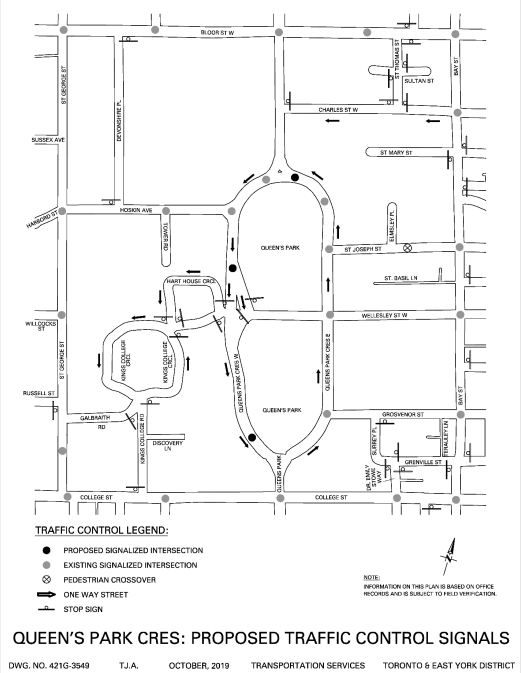 Traffic signals to be constructed by the end of 2020

In an ongoing effort to improve pedestrian safety across the University of Toronto (U of T) campus, three new traffic signals and corresponding pedestrian crossovers will be constructed on Queen’s Park Crescent by the end of 2020, adding to the current six crossing sites. This will improve student and pedestrian safety at this popular jaywalking site which links St. Michael’s College and Victoria College to Queen’s Park, the gateway to the rest of the U of T campus. The University of Toronto Students’ Union (UTSU) has previously announced its support of the project.

Emily Wong, Advisor of Constituency and Special Projects in Councillor Mike Layton’s office, told The Mike, “We’re hoping that the signals can be installed by the end of the year, though to my knowledge there is currently an installation backlog.” The Toronto City Council approved the proposed traffic signals in December 2019, and the cost of construction is estimated by the Toronto Transit Commission (TTC) at a potential $360,000.

Councillor Mike Layton announced that plans for the traffic lights include a manual triggering system, in which the traffic light will not switch at regular intervals, but only when a pedestrian is waiting to cross. The proposed pedestrian crossovers would offer a way around Queen’s Park, rather than through it, which would work to improve student safety by providing this alternate route for students crossing Queen’s Park at night. This would be a relief to students, many of whom have expressed feeling unsafe in Queen’s Park at night or have reported episodes of threatened violence.

The 95 Action Group, a local resident group supportive of the project, is also petitioning to pedestrianize St. Joseph Street. St. Joseph Street is home to St. Mike’s residences, St. Basil’s parish, the Kelly Library, and other classroom buildings. This is part of a greater movement to improve student safety and cultivate community growth and culture. Sign the petition here to turn the St. Mike’s community into a fully pedestrianized, motor vehicle-free, safe space.